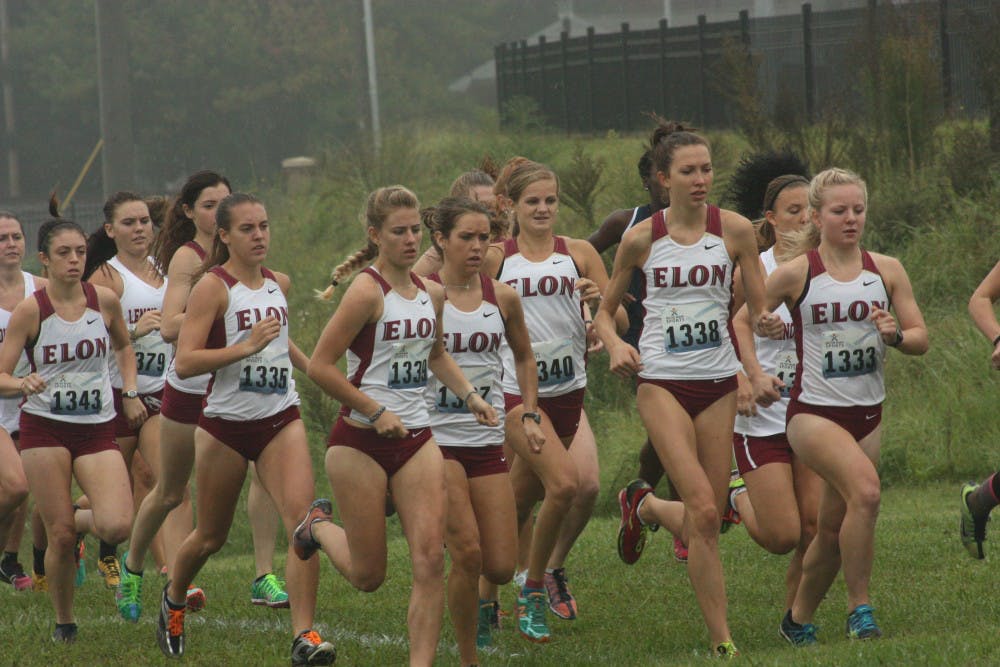 The 2014 cross country season was the longest in Elon University’s history. The impact of the success in 2014 can be felt as the 2015 season dawns for the Phoenix.

In head coach Nick Polk’s office hang two plaques: one is for the 2014 Colonial Athletic Association (CAA) Cross Country Athlete of the Year and the other is a 2014 All-American plaque. Both of them are Luis Vargas’ ‘15 accomplishments.

Vargas’ top-25 finish at the NCAA Cross Country Championships last November earned him All-American honors, and the NCAA Championship race was the only race of seven that Vargas did not win last season.

Even though Vargas has graduated and no longer is running with Elon, his impact is still felt throughout the program.

“He was an inspiration for everybody, and I continue to use him as an example of what to do and how to be successful and how to act when you are successful,” Polk said. “That trickled down into the whole group. Even though we are missing him this year, I think we are better as a team for what he did for us for four years.”

Polk has seen the mindset of the runners at Elon change since this time last year.

“He opened the doors for what’s possible [at Elon],” he said. “We will definitely benefit from the things that he did, because he showed them that you can be at Elon and you can be an All-American and make it to the NCAA championships. You can do big things from a smaller Division I school.

“I think there’s no doubt he set a standard for success in our program.”

The women’s side has had success recently, with a track and field championship last spring. But, the cross country team has placed second at the conference title race in two consecutive seasons (Southern Conference in 2013, CAA in 2014).

“The women got to experience [a championship] in the track season, winning that first CAA championship,” Polk said. “They know what it takes and what it means to be successful, but they’re hungry to win the first cross country championship.”

In total, the women’s side has finished second in five meets in the last two seasons and have placed in the top ten at the NCAA Southeast Regional Championships in both years as well. For junior Kimberly Johansen, that feeling has lingered.

“It gets frustrating after some time, constantly coming in second,” said the Chelmsford, England, native. “All of us girls on the team take that as a bit of energy to push us to a championship.”

Johansen said that, even though they score separately, the runners consider themselves one team.

“Luis definitely helped the women’s team,” she said. “He certainly had an impact on the way we thought about [running] and with his commitment to the team at every single race. His frame of mind is something that we all strive to have, both men and women runners.”

The goals for the women’s side, it would seem, is simple.

“Obviously, we really want to win cross country championships,” Johansen said. “Another year of coming in second place would be very frustrating. We are all just trying to put in that little extra bit of work that’s really gonna count and push as hard as we can in Charleston.”

A switch to pack-style running

For the men’s runners, senior Ryan Gwaltney notes how Vargas’ departure has changed the running style for the cross country team.

“When Luis would start off on the runs, he would break off, with a couple guys chasing after him for a bit, but he’s a next level runner,” said the senior from Anaheim Hills, California. “Now we have a young team that is really looking to us to see how to get into this.”

The men’s team is particularly young this season, with six freshmen joining the ranks of two seniors, two juniors and four sophomores. The young group’s style this season is changing, too.

“We may have lost a big gun up front [in Vargas] but I think we did a good job of replacing him with a lot of good pack-type runners,” Polk said. “Instead of Luis being a minute ahead of everybody, we’re gonna have a good group of seven or eight guys that can run together.”

Cross country scoring is about getting the lowest score as a team, with the winner getting a single point, the second place finisher getting two, and progressing from there.

“We are way deeper as a team,” Polk said. “It really hurts not having one point [from a first-place finisher], but we are way deeper on the men’s side. And we could be led by a couple of freshmen.”

Gwaltney is a big believer in the pack running mentality that Polk is initiating.

“We could have our best CAA finish ever,” he said. “If we really keep things going [as they are], stay healthy and get everyone running together [in a pack], I think it is a reasonable goal.

“It is going to be different, but I think we have a lot of really cool opportunities with all of these young runners coming in.”