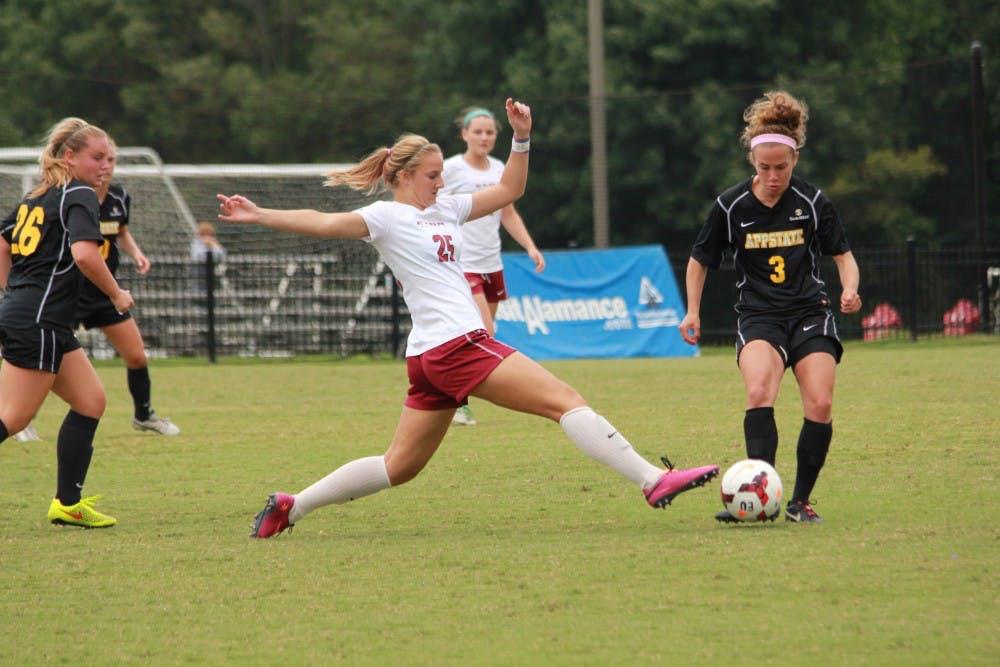 The Elon University women’s soccer team had a difficult end to its season in 2014. After a victory over the University of Delaware on Senior Day, the Phoenix had to travel to the College of William & Mary, Towson University and James Madison University to conclude its season.

The result: three losses, two of which were shutouts, on the road in the span of seven days.

Any hope that the team wouldn’t have an end-of-season road trip again was thwarted when the schedule was released. Elon has four matches in four states in the span of nine days.

Looking at the other schedules in the Colonial Athletic Association (CAA), only one other school – William & Mary, who finished fourth in the CAA last season – finishes its season with four road matches. But the Tribe didn’t have the same issues last season, playing two road matches to finish out their slate.

While the coaches put together their own nonconference schedule, for conference play they are, as head coach Chris Neal put it, “at the mercy of the league.”

“When we get into conference play, we have no control over our schedule,” Neal said. “Two years in a row, they’ve put us on the road for the last [three] games. That is certainly not ideal, but we can’t control that.”

“You’re running into teams [during Senior Day] when obviously, there’s a lot of emotion on the line,” Neal said. “Inevitably, on Senior Day, there’s more energy. It’s just the way it is – it’s human nature.”

While it is a bit frustrating for the coaching staff, especially going through the situation two years in a row, the players were not fazed by what appears to be another daunting end to the season campaign.

“I don’t think it really makes too much of a difference because we’re preparing to win each game regardless of who we’re playing or where we’re playing them,” said Mel Insley, a senior midfielder and one of of this season’s team captains. “We have a common goal, and that is to win each game and grow as a team.”

Sophomore forward Grace Bennett, who led the team in scoring last season with three goals, said the team has one common goal for this season: make it to the conference championships.

“Every single game to get [to the conference championships] is going to be as equally important to reach that goal,” Bennett said.

While the four away matches were determined by the CAA, the four matches to begin the 2015 campaign, and the rest of the team’s nonconference schedule, are purely the design of the coaching staff.

“There are some games there we should definitely win, there are some games there that are 50/50s, either team could win, and there’s a couple games sprinkled in there where we’re going to be the underdog,” Neal said. “You also want to, with the understanding that you’re going to play a significant stretch on the road at the end of the year, get road tested as soon as possible.”

The four away matches at the beginning of the season are designed to do exactly that and, according to Neal, the way the schedule works allows for the students to be in session for most of the home matches as well as having his players missing minimal class time.

“As of right now, our kids don’t miss any class time at all for nonconference games,” Neal said.

Last year, the team played two home games during orientation, which was the beginning of a three-game homestand to start the season. While the team went 1-1 during those games, the attendance of those matches was not any different than any of the home matches played that season.

“All eight of our home games our fan base will be here, which is great,” Neal said.