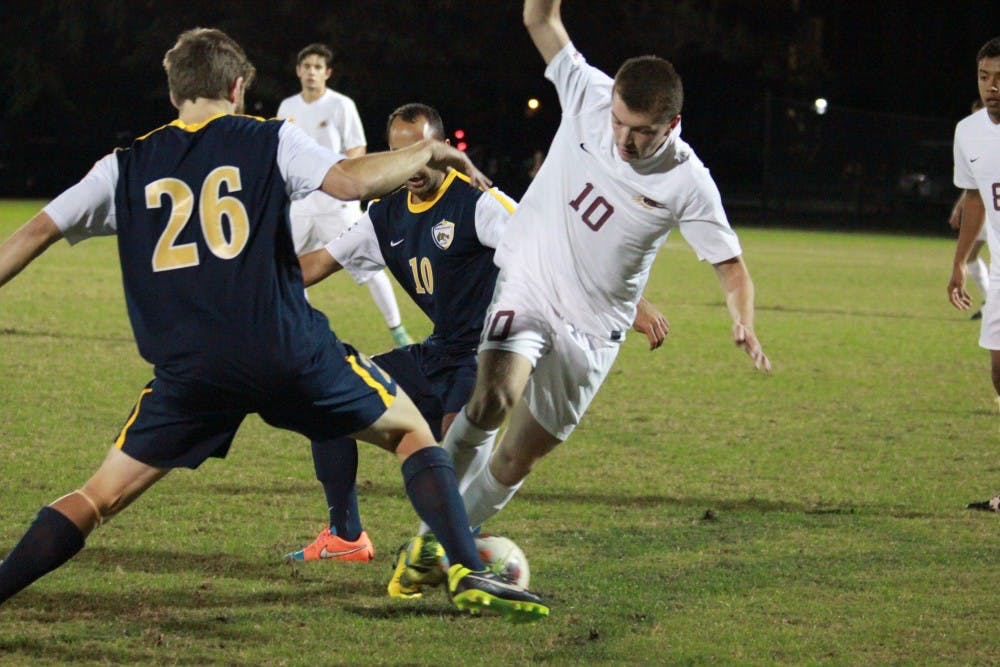 The Elon University men’s soccer team was one point clear atop the Colonial Athletic Association (CAA) standings entering their regular season finale against the University of Delaware. Two first half goals sunk the Phoenix and the team left 2-1 losers, dropping them to fourth in the standings and eliminating the chance to host the conference tournament.

Instead, the Phoenix was forced to play a quarterfinal match at home against Northeastern University, the team Elon had defeated 5-0 at Rudd Field one month earlier. The Phoenix was then stunned on their home field losing 2-0, crashing out of the CAA tournament and losing any hope of earning a bid to the NCAA tournament.

It was the first time in four years the team would go without a championship of any kind.

“We did pretty well, but we fell short,” said head coach Chris Little. “That stung a little bit and left a bad taste in our mouths.”

The Phoenix was unbeaten in eight matches before consecutive losses to close out the season. The Phoenix’s lone goal in those two games was an own goal from a Delaware defender.

Now in his second season as head coach, Chris Little will continue to implement his system of attractive, possession-based soccer as the Phoenix look to become more clinical in front of the goal.

“He’s had that time to shape us now,” said redshirt junior goalkeeper Chris Shannon. “I think everybody is pretty comfortable with him. We know how he likes to play with a good, technical team passing the ball, moving it around rather than a more direct approach. Everybody appreciates that style of play.”

The Phoenix scored multiple goals in just six matches in 2014, and only once scored more than two, during its 5-0 win over Northeastern. Elon’s only defeat in those matches came in a season-opening 3-2 defeat to Stetson University at the John Rennie/Nike Classic.

Instead, Elon relied on its defense last season. Senior right back Nathan Diehl said its defensive work and focus on transitioning from defense to offense early in training can make a difference when looking for goals this season. He said the high-pressure press in defense allows Elon to keep control of the game even when it doesn’t have the ball.

“Solely based on your team’s movement, you can force the other team to play a pass that you know is coming, so you can be ready to intercept the ball or apply more pressure,” he said.

The high-pressure system allows the Phoenix to capitalize on misplaced passes or heavy touches from opposing players and quickly turn them into scoring opportunities.

“I didn’t record an assist last year, so that’s definitely something I’ll be looking to improve on,” he said.

Brace tallied four assists as a part of a career-high 24-point sophomore year as well as two in his rookie campaign in 2012.

Vandermaas-Peeler joined the Phoenix in January, after transferring from the University of North Carolina at Chapel Hill. Fortune joins from the Orlando City Youth Academy, home of former Elon head coach Darren Powell.

Diehl expects chemistry to grow with time but is already seeing a difference. Vandermaas-Peeler played during the spring season, while Fortune is familiar with the Elon system from his time at Orlando City.

Diehl, a fellow North Carolina transfer, knows Vandermaas-Peeler well and expects him to flourish in a Phoenix uniform.

“He’s a goal-scoring threat and with the ball at his feet he’s quick, he makes good decisions [and] he can beat people on the dribble,” Diehl said. “I haven’t seen too many players that are more comfortable on the ball than him.”

Vandermaas-Peeler scored three goals and racked up four assists in his final season as a Tar Heel, finishing second on the team in points with 10. He appeared in all 20 matches during the 2013 season, starting 19 of them for a UNC team that advanced to the second round of the NCAA Tournament.

Fortune has already turned heads of senior players and coaches with his physical ability. At six feet, 170 pounds, the Bedford, England native has the strength and pace to wreak havoc on opposing defenses.

“He’s a big, powerful guy. He gives us something different,” Brace said.

Brace said he and Vandermaas-Peeler are similar in the sense they like to come onto the ball and are slighter, and both create space and opportunities for themselves with small touches, feints and weight shifts. Fortune offers the Phoenix a battering ram of sorts going forward who can win headers and physical battles and offer the pace to get in behind defenses.

Fortune sees himself not only as a goal-scoring threat but also as someone who can help build up play or hold it up. With his size, strength and pace, Fortune offers a viable outlet from clearances out of the Elon defense.

If Fortune can consistently get on the end of clearances or long balls out of the back and hold the ball up, other Phoenix players will be able to get up the field, get forward and offer more attacking options.

The Phoenix may be forced to score early and often as they start their 2015 season with difficult road and neutral site tests. The Phoenix only play two home matches before October. Elon will face DePaul University and Saint Mary’s College of California in the John Rennie/Nike Classic in Durham, N.C and then travel to Wilmington for the UNC Wilmington Classic to take on Campbell University and the University of North Florida.

Elon’s home opener comes against in-state rival Davidson College Sept. 12 and then they hit the road again to take on Atlantic Coast Conference opposition Wake Forest University. Elon’s CAA slate follows with a home contest against Drexel University before starting a three-match road swing against University of South Carolina and conference foes the University of Delaware and the College of William & Mary.

“To attract the best players you have to play against the best teams,” Little said. “For the player’s individual development and our team’s development we need to be tested on a regular basis.”