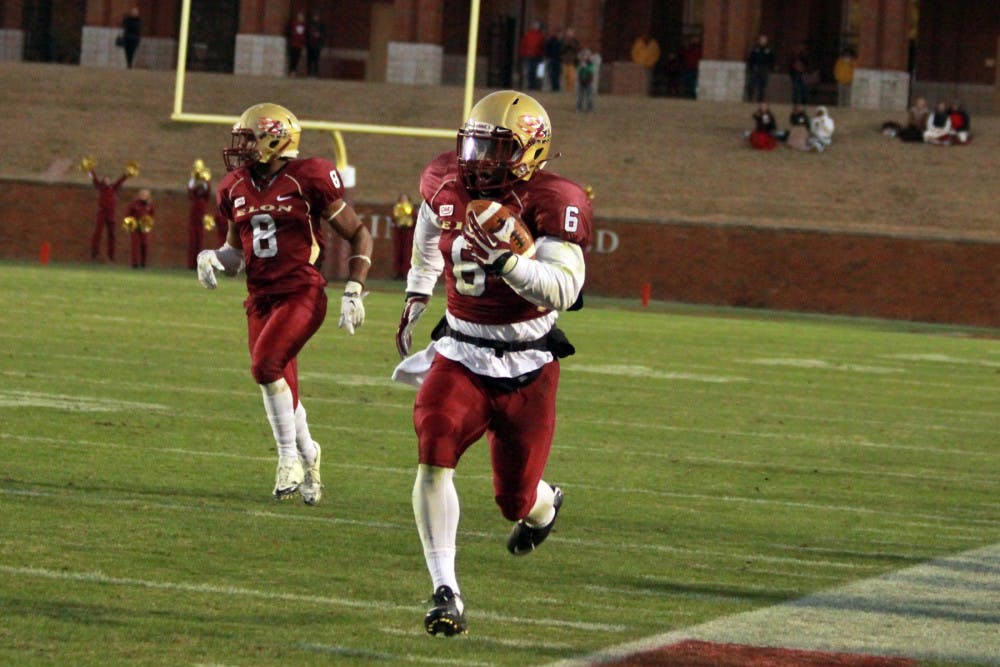 When Chris Blair arrived at Elon University last spring, he said the other defensive backs on the football team knew more about him than he knew about himself.

“[Junior linebacker] John Silas welcomed me into his apartment and told me to move in with him,” Blair said.

The camaraderie is hoping to translate to some onfield success for Elon this fall, as Blair and seniors Miles Williams and Julius Moore will anchor what should be a strong secondary.

The Colonial Athletic Association (CAA) did not welcome Elon kindly in the 2014 season. The 1-11 (0-8 in CAA) campaign left a lot to be desired in head coach Rich Skrosky’s first season.

Now, as the 2015 season approaches, Skrosky is challenging the defense most, which he declared as the strongest of the three units in 2014.

“There’s no question we have more experience on the defensive side of the ball coming back,” he said. “There’s a mindset that those guys know what the expectation is. And I challenge them. I challenged them at the end of the spring. They need to embrace the challenge of being a good defense. The bar for our defense is very high.”

While the defense as a whole struggled in places (11th of 12 in scoring defense in conference, 11th in rushing defense), the pass defense was ninth in the CAA, and the Phoenix was tied for seventh in average passing yardage per play, at 6.9 yards.

The team had 11 interceptions in 12 games, good for seventh in the conference – though four of the teams ahead of the Phoenix were CAA playoff teams, with three of the four teams playing two more games than Elon.

The strength of the pass defense, and the experience returning, leaves little doubt as to what position group Skrosky is expecting the most from.

“I challenged the secondary to step up, and some guys have.” Skrosky said. “I saw the work [the secondary] put in this summer [and] during camp. Their work ethic has been phenomenal. We’re establishing the expectation that this is what it’s gonna take.”

Of the 10 leading tacklers from 2014, the five returning are all defensive backs, led by sophomore Chris Blair. The preseason third-team All-CAA honoree was third on the team with 98 tackles last season, his first at Elon.

Blair, a Winston-Salem native, originally attended Ball State University in Muncie, Indiana. After redshirting his first year on campus, Blair left the Cardinal program to come to Elon, following the path of Skrosky.

“We don’t put a lot of stock in the preseason stuff, but it tells you what our peers think of him, and he really brings a great passion for the game,” Skrosky said.

For many of the transfers, joining a new school is hard – and in football, joining a position group that has already built a close relationship can seem daunting.

Transferring into Elon, Blair was prepared to face those issues, but he was immediately comforted.

That carried over during the season, as he started the final nine games. Blair is Elon’s second leading returner with 51 solo tackles.

With three years of eligibility left, Blair is on a record-shattering pace at Elon, and the potential for success is sky-high for the sophomore.

As Skrosky talked to the press 15 minutes after the first scrimmage, there was one player still on the field for the Phoenix. Senior defensive back Miles Williams ran sprints behind the coach as the interview went on.

That’s a habit for the starting safety, who was selected to be a captain for the second straight season.

Williams is starting his fifth season with the Elon program, and save for a medical redshirt year in 2013, he’s played in every game but two since arriving at Elon.

Williams has been a steady, consistent performer in his time with the Phoenix, with 137 tackles in his three seasons without ever recording a double-digit tackle game (his career high is nine tackles at Appalachian State University in 2012). Last year, Williams had his season-high eight tackles in four different games (vs. University of Richmond, at Towson University, at College of William & Mary and at James Madison University).

As the oldest member of the secondary, Williams can appreciate that the players push each other to be better instead of dragging each other down.

“As long as we’re competing every day, that’s all that we can really ask for.”

Much like his former safety counterpart Williams, Moore has played in all but two games during his career with the Phoenix. But Moore didn’t have a medical redshirt year – instead, the senior has played in 25 consecutive games for Elon.

“We’re familiar with each other.” Moore said of his counterparts. “We know each other’s playing styles. I know CB [Chris Blair] is gonna come down with big hits, Miles will be in position, and [junior defensive back] Adrian [McClendon] is great in coverage. Knowing how each other plays helps in the long run.”

The 2014 season was a strong campaign for Moore, as he was fourth on the team with 67 total tackles. He shone brightest when the ball was in the air, though, as he led the team with four interceptions and six pass breakups.

The 2015 season will bring Moore a challenge he hasn’t faced as a starter at Elon: the cornerback position.

“In the second scrimmage, we were a little disappointed in Julius,” Skrosky said.“He’s played a lot of football, albeit at a different position, which may have to do with repetitions. But I think he responded really well in the third scrimmage.”

“Our No. 1 goal is to win the national championship,” Moore said. “That’s what we strive for and it’s our main goal. Everything else is secondary to that.”

Williams focused the team’s goals in terms of the CAA.

“We just have to take it day-by-day,” Blair said. ”We got to focus on the little things to make everything go together in the big picture.”

While these three defensive backs will be under the spotlight throughout the season, the secondary has a major role in the special teams for Elon.

“We’ve got great depth at defensive back, and not only will that help our secondary, but it will help our special teams,” Skrosky said. “Those guys play such a critical role on special teams, that [the depth] is going to give us the ability to be significantly better than last year.”

The depth can be great, but Skrosky reiterates that good depth doesn’t guarantee success.

“A great work ethic doesn’t guarantee you anything, but it gives you the chance to be good,” Skrosky said. “If you don’t work, you have no chance. And that’s the mindset right now as we are moving this program forward.”

All three players agree that the secondary is a tight-knit unit, both on the field and off.

“They’re my boys. I love them,” Moore said. “Adrian, Chris, Miles, even Little Adrian. We have fun and go out together and have a good time. We really enjoy each other’s company all the time. These really are my boys.”

As Williams and Moore exchanged laughs, Blair elaborated on what his teammate said.

“It’s not just about the football field when we’re together, we got a brotherhood within ourselves,” Blair said. “Not only do we have a good time together, but in the meeting room, we are our own worst critics.

“When we see each other doing something wrong, we get on each other before the coaches do. We can take that [from each other] because we’re that close.”

The group loves to laugh with each other, and they don’t mind talking trash at one another. But, as Moore said: “We know when to joke around and when it’s time to get down to business. We have a good balance of the two.”