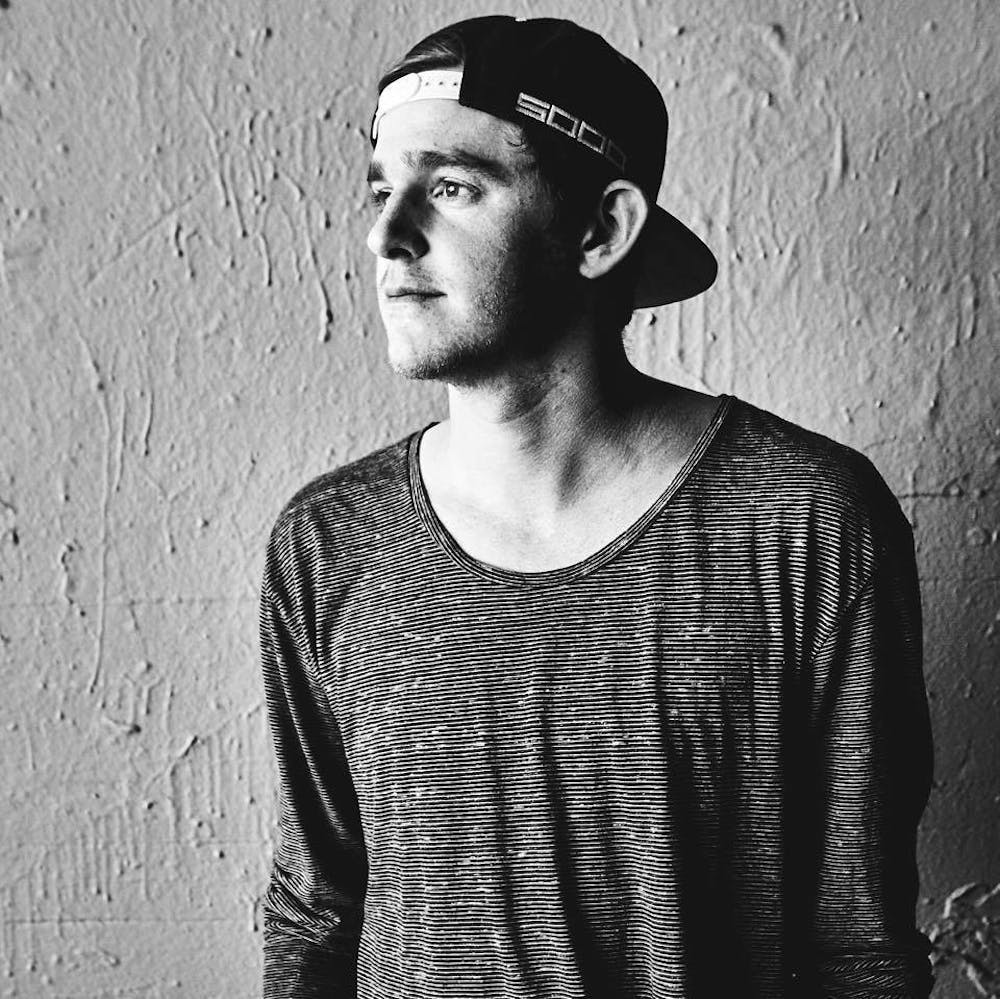 From fiddling with Garage Band in an Elon University dorm room, Tyler Marenyi ’13 – better known by his stage name, NGHTMRE – has from a home base in Los Angeles built an international following in the electronic dance music industry.

Though the young graduate majored in finance and picked up an accounting minor, Marenyi grew disillusioned fast with his studies, which started to feel like a whole lot of going through the motions for the aspiring musician.

“Every day at the end of class I was like, ‘I just want to go back and work on music,’” Marenyi said. “I don’t care about any of this stuff.”

A semester abroad in Florence, Italy, junior year brought the music producer his first slice of success. A single he recorded in Italy was picked up by a small London record label.

“I was still kind of doing it for fun, but this gave me a thought that this might actually work out,” he said.

NGHTMRE’s Facebook page as of publication has more than 114,000 likes, and his Twitter handle has almost 10,000 followers. He counts Skrillex, perhaps the best-known modern artist in the electronic dance music industry, as an inspiration and a friend.

At Ultra Music Festival in March, a weekend-long annual music festival in Miami, Florida, that attracts hundreds of thousands of attendees, Skrillex closed a thundering set with NGHTMRE’s latest single, an unidentified trap single with heavy doses of darkness.

The single, which NGHTMRE said is set to be released through famed artist Diplo’s Mad Decent label in early June, is a reflection of the Elon graduate’s selective strategy when it comes to labels and disseminating his work.

In a changing music industry that is shifting more online with streaming services such as Sound Cloud and Spotify eating up progressively larger chunks of the sales market, artists have had to adapt to different means of getting their music out there. Traditional labels, built on decades of connections within the music business, are losing some ground in EDM.

It can be difficult for new or emerging artists to draw the attention of a major label such as Mad Decent or Mau5trap or Fool’s Gold or Ultra Records, Marenyi said. It’s why the emerging EDM sensation has uploaded the vast majority of his tracks onto services such as Sound Cloud, for free.

“It’s sort of useful to go to labels ‘cause all of them have such connections that they’ve been building for 50 years,” he said. “So if they’re going to put you on and really, really promote you then you’re probably going to make it. It’s so much more bureaucratic.”

Though he’s not making money up-front on the affair, NGHTMRE said he would rather pick up new fans that will support him as he continues to grow, as opposed to picking up a few easy dollars now.

He’s thinking for the long-term. And he’s having some fun while he’s doing it.

“I make whatever I want to make, then I pick the right stuff to release with the brand,” Marenyi said. “I feel like if you have a strong enough image, and as long as your music is consistent, you can have whatever you want.”

The brand of NGHTMRE has required careful crafting and heavy maintenance on social media. Though Marenyi started both efforts more or less alone, he has brought along some help in the way of a recently hired manager who is working to solidify branding and social media usage for the young artist.

With his striking black and white logo and the connotation of the name itself, Marenyi worries some that NGHTMRE can come across as too dark and moody and brooding.

The kind of music he most loves to create, on the other hand, consists of lighter, more upbeat California-style vibes, he said.

“We want to do a little bit of a juxtaposition thing, because the name is NGHTMRE, but it’s melodic and happy music,” Marenyi said. “We’re trying to brand it as this cool, West Coast, minimalistic-type brand, versus being like a scary, evil nightmare type thing.”

He’s quite the image conscious artist.

Taking care to avoid posting any content that supports drugs or too much partying, the performer said he knows that the price of fame comes with an obligation to be a role model, especially for younger fans.

In recent years, the EDM scene has been plagued with reports of drug abuse and fatalities, often a result of a long and untangled history with the drug MDMA, commonly referred to by its street name, Molly. In August 2014, 19 concert-goers were hospitalized and two died from the Mad Decent Block Party, a two-day EDM festival at Maryland’s Meriwether Post Pavilion that is sponsored by Diplo’s label, The Baltimore Sun reported.

But he places a premium over individual accountability as opposed to going after the culture of the industry, which he describes as a close-knit group that is like “thousands of the very best friends you’ve ever had.

“There’s going to be drugs,” Marenyi said. "It sucks that that happens, and obviously you would never, ever want it to happen to anyone, but people have to take responsibility for their own actions. I never would want to be the person advocating for something like that.”