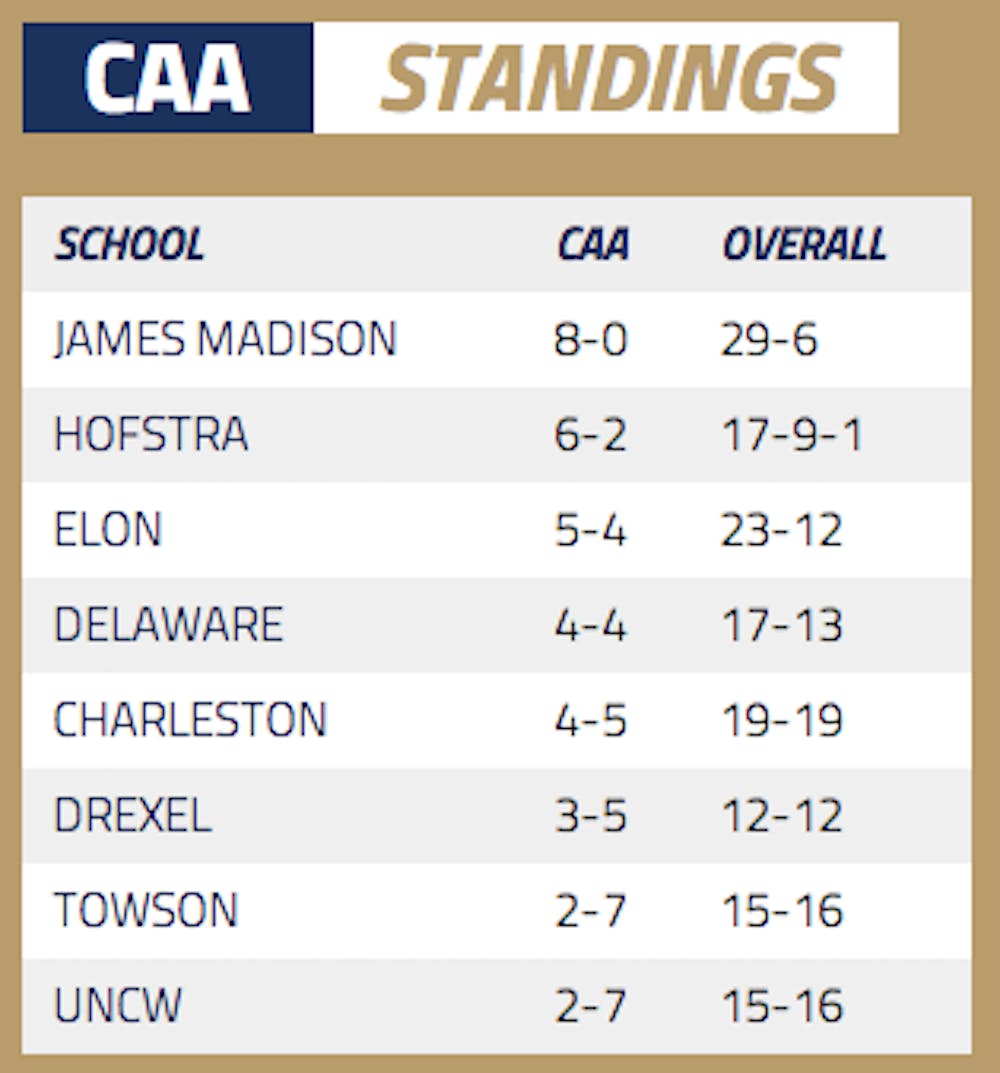 According to caasports.com, Elon's softball team is in third place in the CAA.

The Elon University softball team did not come out with the intensity it needed to fend off an opponent hungry for a conference win.

With Elon senior Kayla Caruso on the mound in the top of the first inning with one out and the bases loaded, Towson University sophomore first baseman Holiday Cahill hit a grand slam to give the Tigers a 4-0 lead. In the end, the Phoenix lost 7-1.

"I think I'm effective when I'm unpredictable with my pitches," Caruso said. "And I wasn't unpredictable today. I think [Towson] knew what was coming."

After Caruso allowed an additional run in the top of the second inning, freshman Kiandra Mitchum appeared in relief in the third.

Mitchum kept the Phoenix in the game by retiring 14 of the first 16 batters she faced.

But the offensive struggles made it difficult for Elon to generate momentum.

Although fatigue was expected to play a role in Towson senior Missy McCormick's pitching today since she threw over 100 pitches on Saturday, McCormick asserted her dominance against the Phoenix.

McCormick delivered her second complete game of the series and allowed one run on five hits.

Elon sophomore Alaina Hall seemed to be the only player on her team able to develop of a rhythm at the plate against McCormick. She went 2-for-3 with a double in the first inning and an RBI single in the fifth inning. According to Hall, her patience at the plate and discipline to avoid hitting rising fastballs, allowed her to deliver in the clutch.

"Today I tried to focus on hitting strikes and waiting for her to bring one in the zone because she was going to have to eventually," Hall said.

Despite the loss, the Phoenix remains in third place in the Colonial Athletic Association.

Since there is plenty of time remaining in the season, Bocock is confident that her players can continue to improve and work its way up in the standings.

According to Hall and Caruso, the key to succeeding in the future is playing with more intensity.

"It's important for us to keep our intensity up," Caruso said. "I feel like their intensity was greater than ours today."

"I think we need to work on our intensity as a team," Hall said. "Individually, we all have really good intensity but sometimes we need to bring it all together."

The Phoenix will travel to Appalachian State University Wednesday for a doubleheader. Expected start time for that game are 4 p.m. and 6 p.m.

After Appalachian State, Elon will host a three-game series against the Delaware Blue Hens at Hunt Softball Park. There will be a doubleheader Saturday at 1 p.m. and 3 p.m. followed by a single game Sunday at 1 p.m.