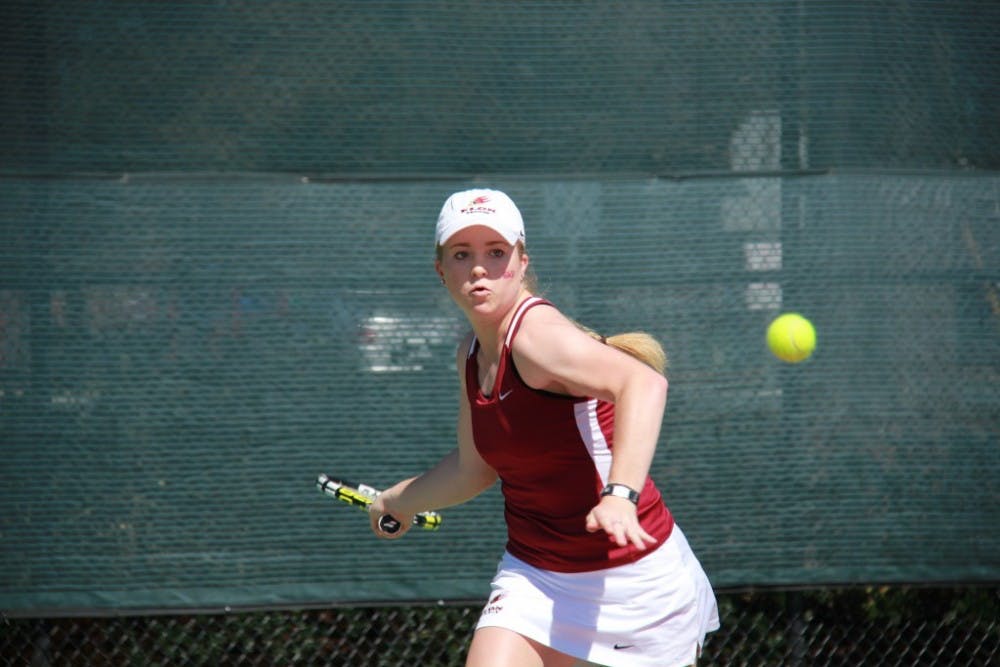 The Elon University women’s tennis team won six out of its last seven matches following a 5-2 win over George Washington University. Reining Colonial Athletic Association doubles team of the week freshman Erica Braschi and junior Taylor Casey clinched the doubles point for the Phoenix in addition to each registering singles wins on the day.

“Today was a good one and I think it helped us build confidence,” said head coach Elizabeth Anderson.

Elon took all three doubles matches to gain an early 1-0 lead. Freshmen Bridget Liddell and Olivia Lucas took care of sophomore Allison Hansen and freshman Teodora Radosavljevic 8-3 at No. 2 doubles. Braschi and Casey then clinched the point with an 8-4 victory over junior Egle Jakuciunaite and freshman Taylor Nederlander at No. 3 doubles.

“It just comes down to our chemistry,” Braschi said. “I just have so much fun playing with her and every time we go out there we just enjoy it.”

Freshman Kirsten Ward and senior Barbora Lazarova completed the sweep of doubles play with a tiebreaker win at No. 1 doubles.

"We started well during doubles,” Anderson said. “We been working a lot on having a little bit better startsand building momentum there.”

Braschi brought the Phoenix within a point of clinching with a 6-1, 6-2 straight sets win over Hansen. “It was a matter of staying focused,” Braschi said.

Braschi added the loss to Liberty back March 7 was a wakeup call after winning four straight prior to the loss and since then effort and energy has never been higher.

Senior Maria Camara sealed Elon’s victory with a straight sets win of her own. Camara didn’t lose a game during the first set and carried her momentum through the second as she defeated Nederlander 6-0, 6-3 at No. 5 singles.

With the match already in hand, George Washington managed to get on the board with a pair of wins in super tiebreakers. Radosavljevic came roaring back after losing the first set to win the second 6-1 and dominated the super tiebreaker winning 10-1 to give the Colonials their first win of the afternoon. Then, Junior Lana Robins closed out the day with a 10-4 super tiebreaker win over Ward to take the match.

With the win, Elon improves to 7-5 on the year. Meanwhile, the loss drops George Washington to 4-8 this season.

The Phoenix will return to the Jimmy Powell Tennis Center on Wednesday, March 18 when it faces in-state rivals East Carolina University at 2:30 p.m.

“We just need to keep working, fine tune our doubles and keep working on our singles,” Anderson said.