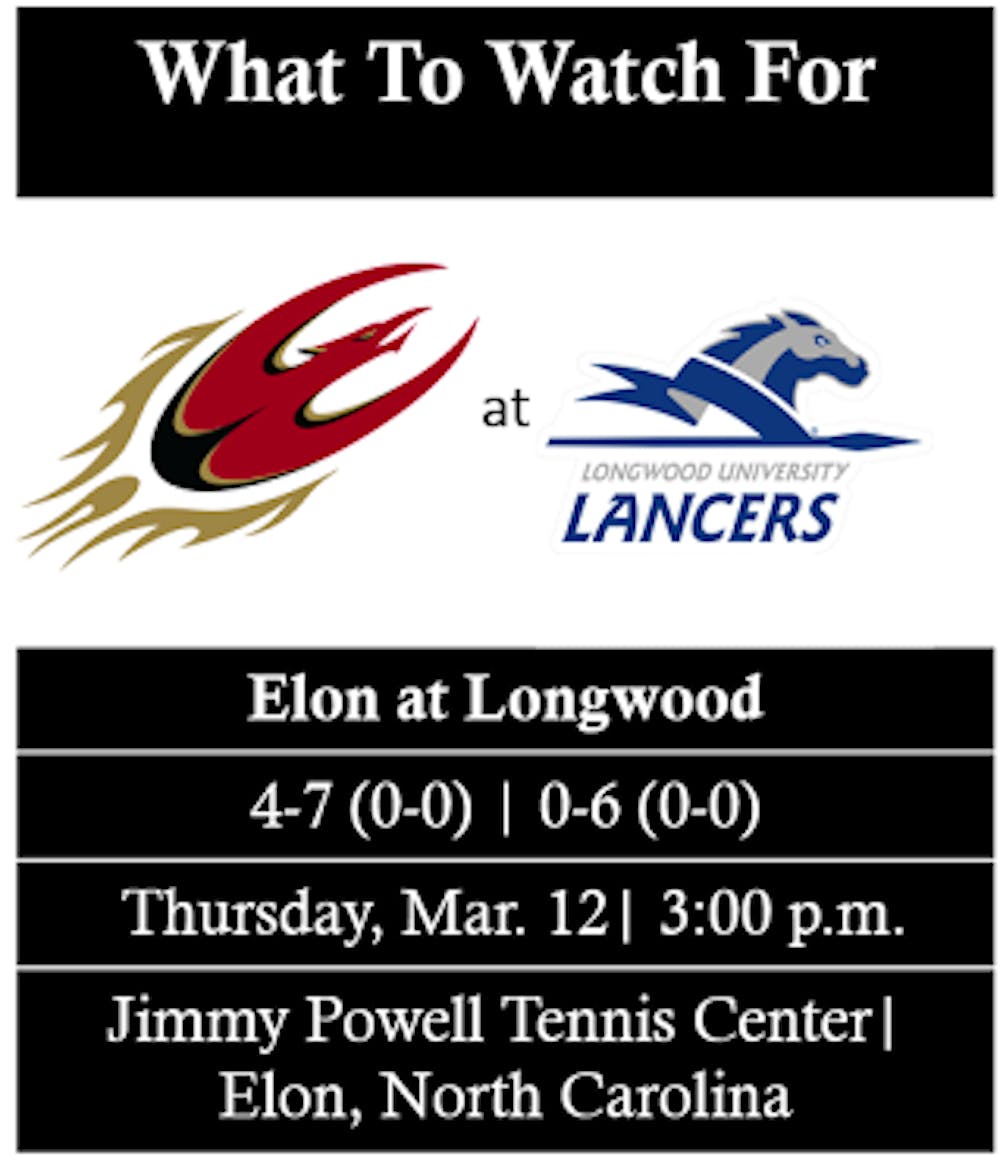 The Phoenix started the day by breezing past NC Central 6-1. Junior Robert Lindgren and senior Juan Madrid defeated junior Thomas Persico and sophomore Will East 6-3 at No. 1 doubles. Soon after, seniors Dan Sablik and Chris Geaslen clinched the doubles point with a 6-4 win over freshman Kert Kilumets and senior Jamal Hoyte at No. 3 doubles.

Elon came out swinging in singles play winning the first five singles matches of the contest. Senior Brian Kowalski didn’t drop a single game in his 6-0, 6-0 straight sets route of senior Fabrice George at No. 4 singles.

Senior Stefan Fortmann clinched the win for the Phoenix with a 6-1, 6-3 straight sets victory over Kilumets at No. 1 singles.

Freshman Josh Luck put Elon further ahead with the match already decided. The South African made quick work of Hoyte at No. 5 singles winning 6-1, 6-3.

Redshirt-freshman Neal Port made it 6-0 Phoenix with a straight sets win of his at No. 6 singles. Port edged past junior Thomas Persico in the first set winning 7-5, but cruised the rest of the way taking the second 6-0.

Senior Jordan Kaufman was the lone Phoenix player to lose his singles match. The Armonk, New York native lost in a super-tiebreaker to senior Daniil Gerasimov at No. 2 singles.

The Phoenix then squared off with former SoCon rivals Georgia Southern. Despite losing 5-2, Fortmann said the match was a lot closer than the score may have shown.

“A lot of the matches were close went three sets,” he said. “I think it could have gone either way, we just fell short.”

But the Eagles came storming back to take the next two matches and the doubles point. First, Christian Kerrigan and Joan Carles Alcala outlasted sophomore Chris Humphreys and Port in a tiebreaker at No. 3 doubles winning 8-7 (7-4). Almost immediately after, senior Albert Codina Sala and junior Ristomatte Manne clinched the point with an 8-6 win over senior Juan Madrid and junior Robert Lindgren.

“The doubles point is a lot more important that people realize,” Fortmann said. “Getting it is something we pride ourselves on, it was just one of those days we couldn’t get over the hump.”

Georgia Southern extended their lead to 2-0 through sophomore Nico de Groof. De Groof eased past Humphreys at No. 6 singles 6-2, 6-1.

The Phoenix answered through Lindgren to finally put Elon on the board with his 6-2, 6-4 straight sets win over Landin at No. 3 singles.

However, that was a close as Elon would come. Despite winning the first set, Luck dropped the next two to lose 2-6, 6-2, 6-2 to Hoffman at No. 4 singles to bring Georgia Southern within a point of winning.

“(Hoffman) stepped up his game,” Luck said. “I dropped off and the next thing I knew it was tied and anything could happen in a third set.”

The Phoenix are now 4-7 on the year while NC Central and Georgia Southern are now 1-4 and 4-6 respectively.

Elon will return to the court Thursday, Mar. 12 when it hosts Longwood University at the Jimmy Powell Tennis Center at 3 p.m.