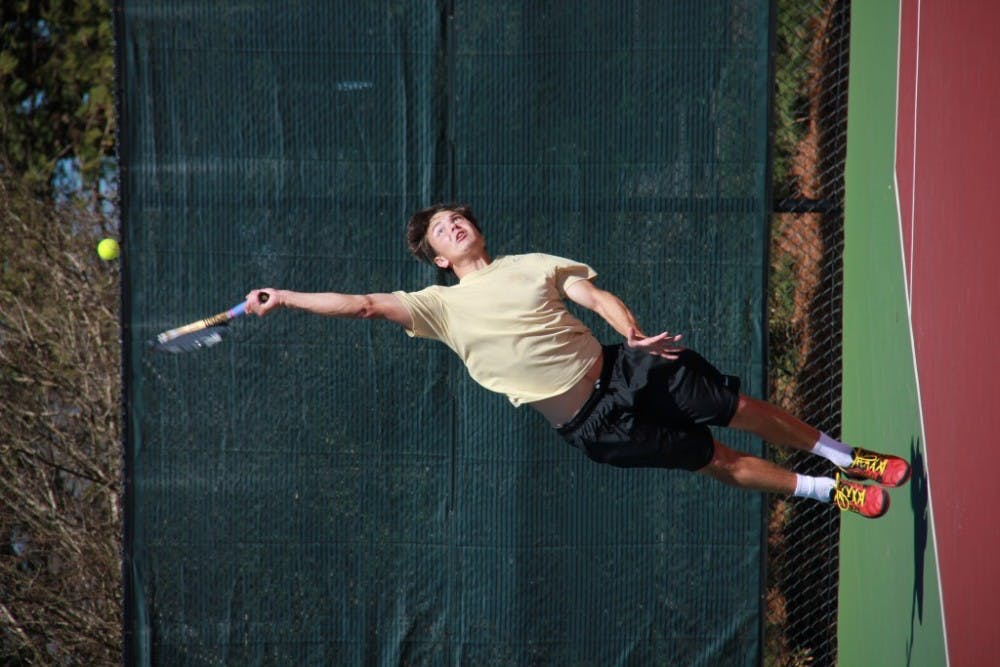 Junior Robert Lindgren became the first player in the history of the Elon University men’s tennis program to take home the Colonial Athletic Association’s singles player of the week. And it didn’t take long.

Just a year into its new conference, the Phoenix is proving to have some of the most talented tennis players in the league.

“[Lindgren] is certainly going in the right direction,” said head coach Michael Leonard. “We knew going into the season that No. 2 and No. 3 [singles] were going to be tough, and we would need guys to step up.”

Although he is the first Elon player to earn the title, Lindgren is the third team member to claim Player of the Week honors.

“He’s been a very good player for us over the years, especially the past few weeks, so he deserves it,” said senior Brian Kowalski.

Lindgren’s most recent defeat was against Longwood University March 12. Battling through a cold, Lindgren fought to win the second set and force a super tiebreaker only to lose in nail-biting fashion 11-9.

Leonard noted Lindgren was unable to finish off points and rallies because of an undisclosed sickness, forcing him to retire.

So the junior answered the call in the next match against George Washington University, cruising past freshman Chris Fletcher 6-2, 6-2.

“I really liked the way he came back,” Leonard said. “He played really well.”

Lindgren said it had more to do with his mentality going into the match, rather than anything physical.

“I came out trying to play aggressively,” Lindgren said. “I got on top of him and tried to play with a lot of energy.”

Lindgren’s name has been penciled in at the top half of the lineup for much of his collegiate career. The Sweden native played much of the last two years from the No. 3 singles spot. He also filled in the No. 2 singles spot on occasion last year when Fortmann dropped lower in the lineup during a brief slump.

After former team star Cameron Silverman graduated last spring, the No. 1 singles spot naturally fell to Fortmann, who solidified himself at No. 2 singles for the majority of the past two years.

The two vacant spots at the top half of the Phoenix lineup allowed Lindgren to step up.

Elon was plagued by low temperatures, rain and snow for much of the early part of the season, forcing the team indoors more often than they would have liked. Lindgren said his style of play is better suited for outdoor tennis.

“It’s a little slower, the ball bounces a little higher, points are longer and it’s easier to play defense,” he said about playing inside.

Like the rest of the team at the beginning of the year, Lindgren struggled, but he expects to heat up with the weather.

“For me, I enjoy playing outdoors again,” Lindgren said.  “I just like the weather getting better.”

Despite inconsistent performances, Lindgren said he senses a shift in the team’s spirit.

“It feels better now. We’re playing better as a team,” he said.