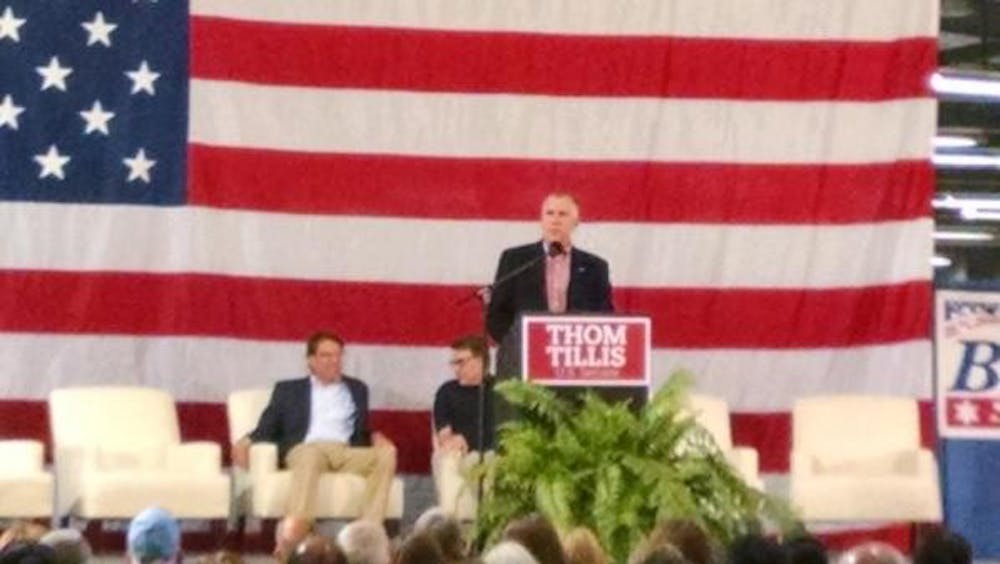 That was the main message from Thom Tillis at the Conservative Rally Friday night in in Smithfield, North Carolina.

From Governor Rick Perry of Texas to North Carolina senior senator Richard Burr, conservatives came out to support the Republican Senate candidate as he aims to defeat Democratic Incumbent Hagan in the upcoming midterm elections.

"Welcome to the Harry Reid retirement party," Burr said to the crowd of more than 3,000 people at the Central Marketing Tobacco Warehouse. "If you want to retire [Senate Majority Leader] Harry Reid, the best way is to retire Kay Hagan this year."

Also featured at the rally was North Carolina Governor Pat McCrory, who alongside Perry ignited the crowd as they introduced Tillis to the tune of "Only in America."

The Republicans also attacked Hagan on the talking points Tillis has been pointing out for for months during his campaign: Hagan has voted with President Obama 96% of the time while in the Senate and she continues to support of the Affordable Care Act.

"In 2008 [Hagan] stood on the debate stage and she said that a senator who votes with the president 92% of the time whether you agree with him or not, doesn't work here in North Carolina," Tillis said. "She was saying that about Elizabeth Dole and that's the last thing Senator Hagan said that I completely agree with. We are going to send Kay Hagan home. We are going to fire Kay Hagan. We're going to fire Harry Reid."

One of Hagan's votes with Obama was her support of the Affordable Care Act, also known as Obamacare. Perry took advantage of this, rallying the crowd around Tillis' promise to work to repeal the law if elected.

"You can't have a bureaucrat in Washington say how to deliver healthcare in this state," Perry said. "Thom Tillis knows that. He will go to Washington, D.C. and do everything he can to dismantle Obamacare."

Tillis suggested his own course of action regarding ISIS, igniting the crowd when he said, "With ISIS there's one thing for sure: We're going to wipe them off the face of the planet. We have to do it because that's what they've sworn to do to us."

At the end of the rally, Perry gave one final push for the audience to vote for Tillis when polls open Tuesday, Nov. 4th.

"This is the single most important thing that you're going to do in the next 11 days," Perry said to the crowd. "Electing this man to the United States Senate and helping make America great again."