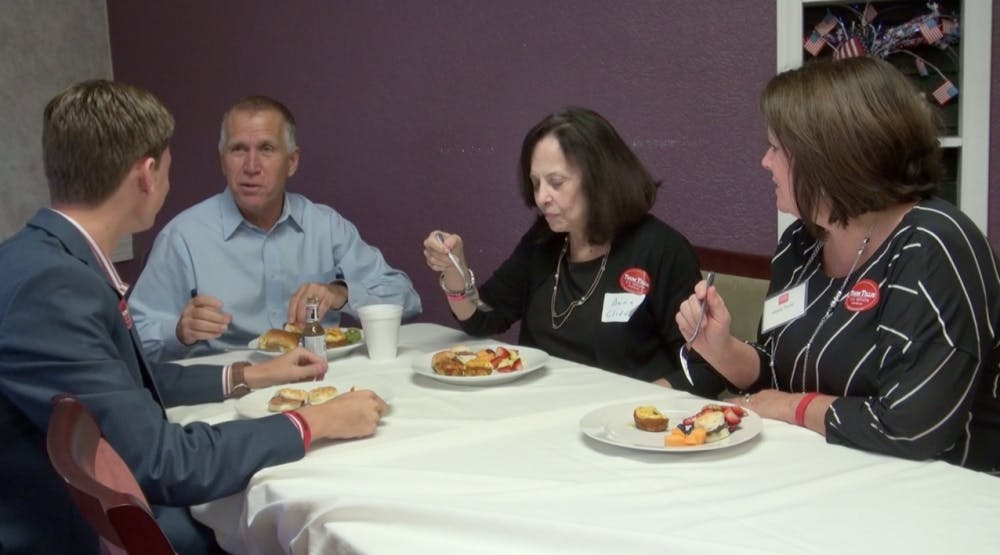 Biscuits and Politics; that was the name of the game on the morning of Sept. 20, as the Alamance County Replublican Headquarters hosted N.C. House Speaker Thom Tillis for a campaign event in Burlington, N.C. Education was on the menu.

Throughout the southern-style breakfast, conversation between Alamance County republicans focused on the ability of North Carolina residents to get a quality education.

While Kay Hagan, his opponent in the race for N.C. Senate, has disagreed with Tillis' idea to overhaul the Department of Education, Tillis said he wants to take measures to improve the futures of graduates from schools within the state.

Members of Elon University's College Republicans organization attended the event, and had non-partisan opinions on the election.

Member Trevor Sham said he enjoys not only talking about this issues, but attending events like the Biscuits and Politics breakfast to meet the candidates face-to-face.

"Do your research," said Mueller, who first got into politics when she attended a CPAC event in 2012. "Know what each person's stance is, and more than anything, if you vote for Hagan [or] if you vote for Tillis, just be active and be aware."

Sham said students need to pop the idea of an "Elon bubble," and pay attention to issues that matter in Alamance County.

"These issues that are being debated in this election- they are affecting all of us," Sham said. "Even though we might not feel the effects as well as the people in the community, as Elon students, it's important to be aware of them because sooner or later, they are going to be affecting us."

These Elon students from across the country are voicing their opinions in an election they may not even be able to vote in.