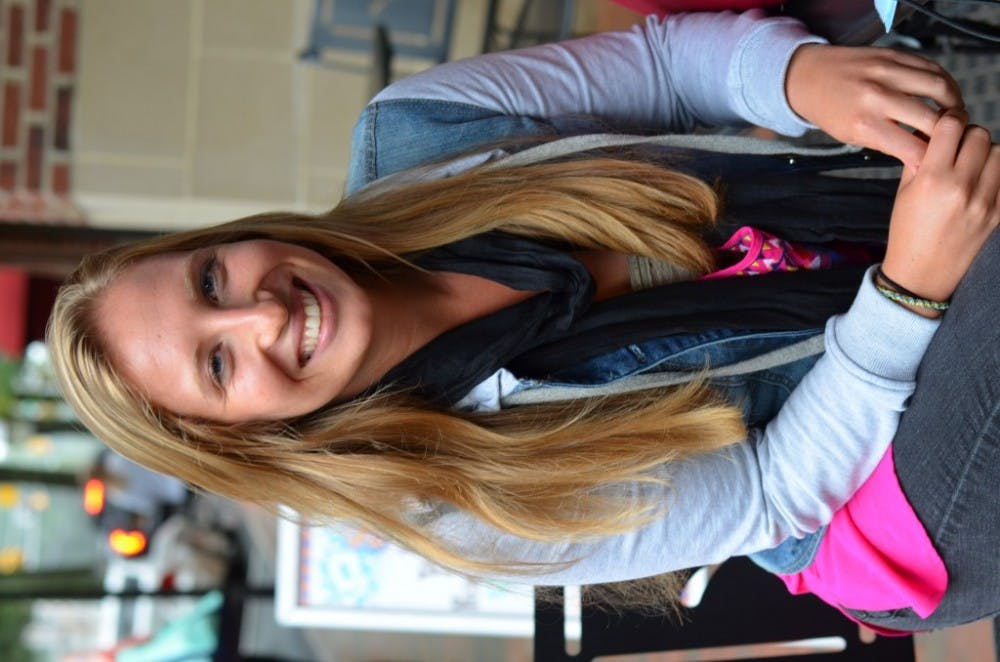 Senior Emilia Azar is smiling more often now, under the spark of an idea that looks to become a reality. Photo by Jane Seidel, photo editor.

Depression claimed her prisoner and made her bed the cell.

She missed countless classes she cared about immensely. She just couldn’t get herself out of bed.

Her friends surrounded her in the hopes that she would pick herself back up.

One year later, senior Emilia Azar is back on her feet, sprinting ahead with an idea to help draw attention to the more than 1,000 student suicides committed on college campuses annually.

Thanks to Azar’s efforts, Elon looks to become the 399th chapter of Active Minds to raise awareness of mental health issues and to erase its surrounding stigmas, pending approval by the Office of Student Activities.

“There’s a need for people to be aware that mental health issues are very real,” said Paul Fromson, professor of psychology.

Active Minds was created in 2002 at the University of Pennsylvania by then-junior Alison Malmon whose brother had suffered from severe schizophrenia and committed suicide. Since her first efforts twelve years ago in Philadelphia, Malmon’s idea has spread to college campuses across the country fostering open discussions of mental health issues.

In July, while reading Cosmopolitan in a nail salon, Azar stumbled across an article about young women starting nonprofits, with one of them being Active Minds.

“As I read through the description … it really spoke to me. I researched it, and I was hooked,” she said.

According to Fromson, whose research focuses on emotional disorders, students need to talk about mental health and to understand that no one is immune to these disorders.

“Throughout the interview process [for the executive board], I was surprised at how many people told me about their issues or past issues,” said senior Emilia Azar, now pending president of Elon’s Active Minds chapter. “[The stigma] is going to be easier to break than we realize.”

During her sophomore year at Elon, Azar was diagnosed with general anxiety disorder, a mental disease that causes people to worry excessively.

The following fall, she decided to study abroad in Costa Rica, in the hope that it would alleviate the anxiety that had taken control of her life.

“I thought by being in this country that is known for being a very relaxed country, it would just change everything,” Azar said. “And I was wrong.”

While abroad, Azar said she experienced symptoms of her anxiety when she had no reason to worry. She longed for peace and relaxation. Instead, she encountered the exact opposite, and her anxiety worsened into something else: depression.

And the whole time, she felt alone.

“It’s hard because you hate hearing that your best friend feels like they’re ashamed to say something,” said senior Kim Owens, who lived with Azar during her battle with depression.

To Azar, Owens and her other roommates were the best support she could have asked for. They would ask to borrow clothes to get her out of bed, and send her inspirations pictures and text messages throughout the day.

“They didn’t pity me; they didn’t try to save me,” Azar said. “They empowered me to save myself.”

Now, she seeks to save others through Active Minds.

When she discovered that Elon did not have a chapter on campus, she reached out to friends, sorority sisters and professors for physical and emotional support. Owens jumped behind Azar 100 percent.

“This [organization] is something different,” she said. “It focuses on a specific need, which is the ability for students to know they are not alone.”

Though the organization is not yet official, the executive board has already started planning for the semester.

The group plans on collaborating with the Global Education Center to create workshops for international students regarding mental health, and to better prepare students when going abroad for culture shock.

Azar stressed that while Active Minds wants to help students, it is not a support group.

“This is not a group where people sit around and talk about their issues,” she said. “We are the proactive side of it.”

Even so, Azar and her team do plan on working with Anita Smith from the Elon counseling department to encourage students who need help to use their services. They are also looking into new ways to market counseling to students, change the stigma of counseling and make students more comfortable with the topic.

“We hope that Active Minds will engage our professional staff in Health Services, Counseling Services and Health Promotion to become aware of professional resources that exist on campus and in our community around mental health issues,” said Jana Lynn Patterson, dean of Student Health and Wellness, in an email.

Theatrical design major Cody Schmidt reached out to Active Minds when he heard about it.

For his capstone project, the senior is putting on the play “Frozen.” The play delves into the topic of mental illness through four characters with varying degrees of mental instability.

Active Minds plans to help market the play for Schmidt through social media. During the show days, Active Minds will distribute information packets about mental health and resources available on campus, with all proceeds benefiting the Elon chapter’s parent organization.

“I want to raise awareness across campus,” Schmidt said. “Theater is meant to reach out to everyone. It does comment on human nature, and that’s what I want to let the campus see.”

But Azar said that she wants this organization to go beyond just mental health.

“I want to make this club not only about mental health, but about holistic health, connecting mind, body and soul,” Azar said. “Because when those three are in balance, that’s the best.”

Fromson, the faculty advisor for Active Minds, said it takes committed leaders like Azar and Owens to make such an organization possible.

“Emilia has been able to put together a group of very committed and talented people who are going to take the reins,” he said.

Azar is determined to change the stigma of the mental health culture at Elon.