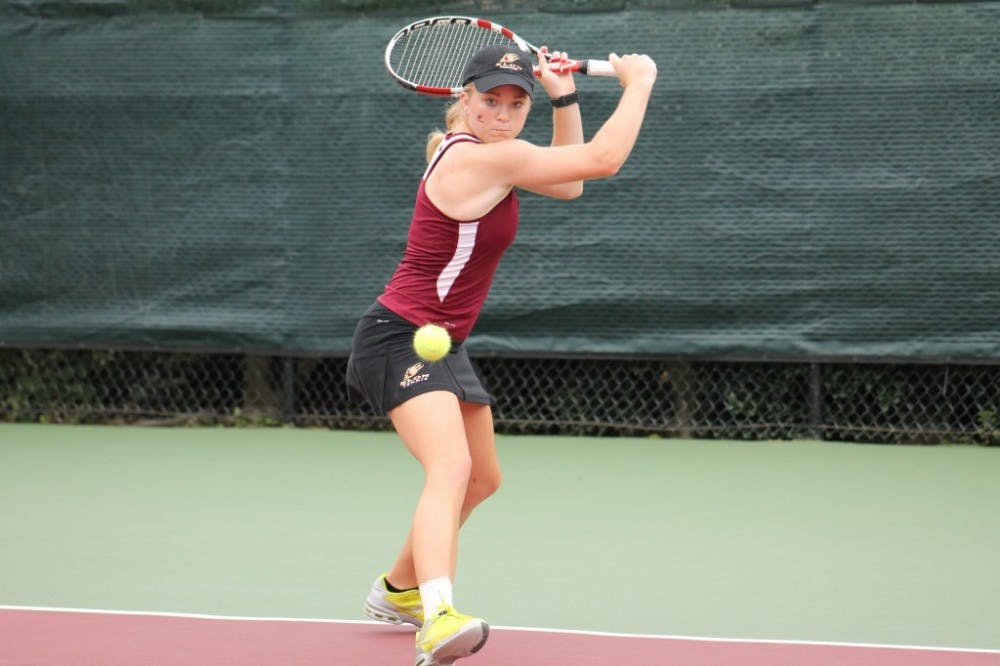 Kirsten Ward was one Elon freshman who showed lots of upside during this past weekend's Elon Invitational. Photo by Nicole Osgood, Staff Photographer.

“I think [our freshmen] look very good,” Anderson said at Elon’s fall tournament Sept. 12-14. “They’re a very talented group and very hard-working. We’ve just got to continue getting them used to college tennis and college in general.”

In an effort to generate team bonding, assistant coach Bob Owens gave the freshmen a nickname: The Fab Five.

“I’ve been looking for a nickname for them, but it didn’t take us long to see that this was an extraordinary group of young ladies,” Owens said. “I’m hoping that [this nickname] helps with the camaraderie of the team and to identify with Elon tennis. They have high tennis IQ and are hard workers.”

Five freshmen, one junior and two seniors currently account for the team’s active roster. During the Elon Invitational, the team shined.

Erica Braschi, who was placed into the A-2 Singles Flight, won her first matches handily. She is from Puerto Rico and entered Elon with a 5-1 record against 4-star opponents, according to the Tennis Recruiting Network. Her one-handed backhand, wicked slice and strategic thinking make her a force to be reckoned with.

“I was very nervous before the first match and before the first doubles, but I think it went pretty well,” Braschi said. “Doing tennis before college is always so individual, and now it’s with a team.”

Freshman Olivia Lucas also asserted her dominance throughout the Elon Invitational in the A-3 Singles Flight. In the first day of the tournament, she outscored her opponents 24-6 in terms of games won. On the second day, she landed a spot in the finals.

“It feels great [to be playing well], and my confidence is getting so much better from this tournament,” Lucas said. “All the freshmen are really good this year, and we gel really well, so I think we’re going to have a great season.”

While the freshmen were impressive, returning players proved themselves capable of competing at a high level as well.

Senior Barbora Lazarova went 2-1 in singles play during the first two days of the tournament. Junior Taylor Casey was victorious in a decisive 6-1, 6-0 victory in the opening round of singles play.

Through three rounds of singles and one round of doubles play, the Phoenix posted a 13-5 overall record.

To improve during the course of the season, Elon will need to build on its success and prepare itself as best it can for conference play.

“We’re used to a lot of the teams [in the CAA] because we’ve played them for the past few years,” Anderson said. “We need to continue working on our strategy and just building points. That comes with experience and time.”

With the foundation laid last year and the freshmen that are making their mark, it’s not out of the realm to consider Elon a contender for the conference title once again.