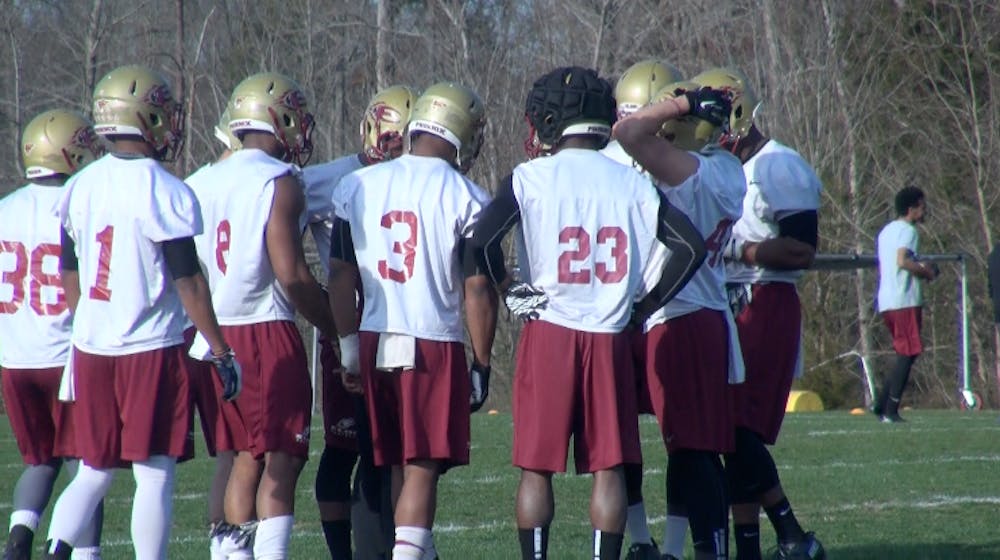 Since taking the job in December 2013, Skrosky made it his mission to rebuild and revitalize a football program that has won a total of 10 games over the last three seasons.

"I think the enthusiasm level and the running around and the effort was pretty good today," Skrosky said.

One of those players who showed a lot of enthusiasm was red-shirt junior quarterback, Mike Quinn.

"With every team comes some jitters you have to get out in the first practice," Quinn said. "But I feel that coach prepared us with a lot of meetings. Overall, we were doing really well."

With Skrosky came the motto, "Embrace the Grind," which quickly caught on with the university and the team. Skrosky said it sparked a change in his players that he's been pleased with.

"It's been interesting to see how guys have embraced the change," Skrosky said. "Some have done it in a 'test in the water' type thing. Others have jumped right in. I think that goes to show all the different personalities."

But a new coach isn't the only thing new to Elon football this year. Beginning this fall, Elon moves to the Colonial Athletic Association after spending the last 11 years in the Southern Conference. However, switching conferences will not play a factor in how Skrosky prepares for the season.

"We really just want to get our base system in on all three sides of the ball," Skrosky said. "When we leave spring, [we want] every player in our system to be comfortable. Whether we are playing in the Southern Conference or the CAA, that really wouldn't have an impact on what we are trying to accomplish."

For Quinn, on the other hand, switching conferences will change how he prepares for the upcoming season.

"For the past four years, I've been watching Southern Conference teams," Quinn said. "I definitely have to get right in the film room, and the coaches have to get us right by the different tempo and different style of offense and defense. We have a big northern staff, so they know what happens up there."

The Elon football team will continue to practice through the month of April and will conclude spring training with the annual maroon and gold scrimmage on April 26 at Rhodes Stadium.