S.E. Cupp says Millennials are the future of politics 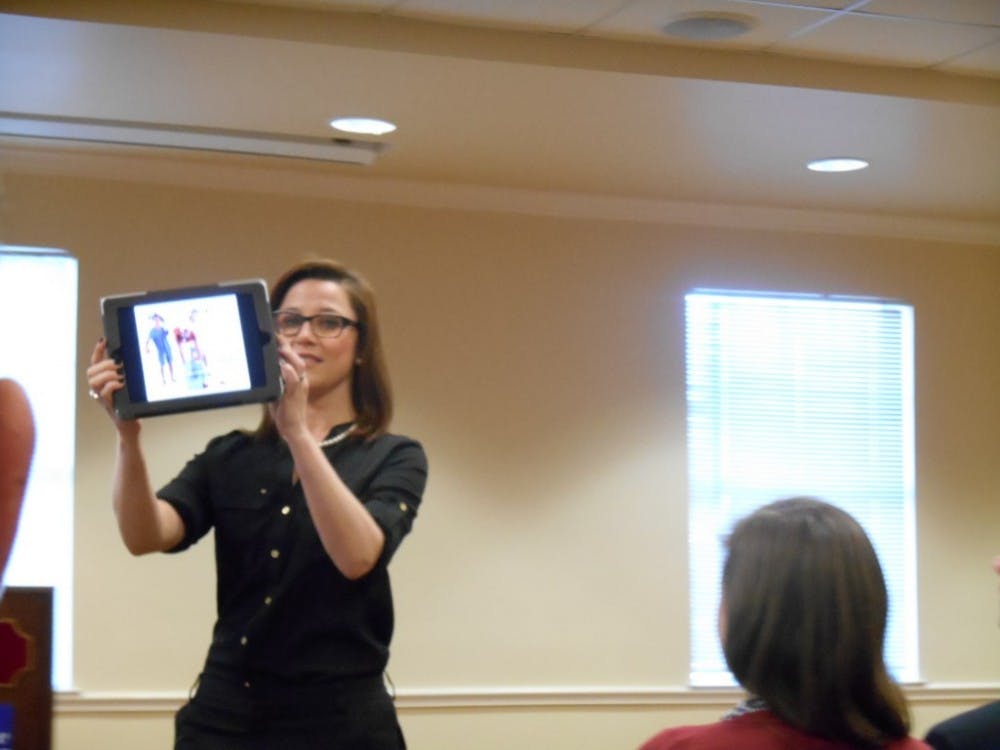 S.E. Cupp waved a tablet in the air, detailing transgressions from both the conservative and liberal sides of the aisle. Photo by Simone Jasper, senior reporter.

Cupp asked the audience, largely students, some adjectives that come to mind when picturing how conservatives view young people. The laundry list, which Cupp wrote down and displayed, included words like lazy, uniformed, selfish and irresponsible.

While some conservatives belittle the Millennial generation, Cupp said, some liberals “pander” to youth. She said both the Democrat and Republican parties need the youth vote, now 80 millions strong and projected to be two-thirds of the population eligible to vote by 2020.

“I’m hoping that you can, over the course of you college careers and your later professional lives, maybe open your minds about some of the preconceived notions you have about the political movements within the two parties,” she said.

The Millennial generation, Cupp’s target audience, is unlike any other in history in its willingness to listen, to everyone from Sen. Rand Paul (R-KY) to President Barack Obama.

But Cupp said she doesn’t blame young people for leaving both parties in droves and registering as independent in larger numbers than any preceding generation.

“I get that impulse,” she said. “I wouldn’t want to be associated with either party right now. Washington is terrible, and both parties have really tarnished their brands over the past few years.”

Senior Natalie Cuzmenco, president of the Elon chapter of the Young Americans for Liberty, a national libertarian organization, spearheaded the effort to bring Cupp to campus by securing funding from the SGA, her own organization, a political foundation and a private donor.

“I’m so glad she came to Elon, and I think she’s different than a lot of the speakers we see her,” Cuzmenco said. “I wanted to come out and show people that there’s more out there than preconceived liberal notions of what a college student should be. I wanted to open their minds some.”

Though Cupp openly identifies as an outspoken conservative, in what she still calls a “largely liberal” media landscape, she said she encourages political dissent and debate that is reasoned and tempered. Her political analysis show, CNN’s “Crossfire,” seeks to host debates with experts from all over.

Past guests have included everyone from Sally Kohn, a liberal political commentator, to Peter Sprigg, with the conservative-minded Family Research Council.

As she has expressed many times on the show, Cupp doesn’t have a whole lot of hope for her own Republican party, calling it “out of touch” and “ill-equipped” to reach women and minorities.

“I don’t have a ton of optimism that the GOP as it currently exists will be able to reach a lot of women and minorities,” she said. “After 2012, liberals hammered the death nail into conservatives when it comes to reaching young voters.”

Not all young voters have thrown in the towel, though, according to freshman Bryan Sullivan, a member of the Elon University chapter of the College Republicans, a national collegiate organization promoting Republican ideals.

“It’s really motivating, in a way, to see a speaker like her here at Elon,” he said. “It’s definitely not something you see everyday.”

Cupp also got more specific, keying in on voter ID laws, the Affordable Care Act and the role of technology in influencing the youth vote.

“This administration does not speak your language,” she said of the Affordable Care Act. “It would have been really easy to hire some teenagers from Silicon Valley to make this work better.”

Cupp is also firmly against the concept of a federal minimum wage, as she said it doesn’t reflect fiscal realities between states. The costs of living in Montana and in New York are two different realities, she said.

“If we are to focus on making minimum wage jobs a long-term employment option, that’s not a fair deal for the people who get stuck in the cycle of working them year after year,” she said. “They’re a great temporary option for college students and others who are willing to work hard and make money.”

To get to the root of issues, Cupp said, people have to become critical news consumers, not trusting what comes just from CNN or Fox News or MSNBC.

“I think we’d all do better, both as news consumers and producers, to challenge what we hear,” she said. “Don’t just sit back and watch. You have to craft the story from a culmination of different sources. You have to find the truth.”