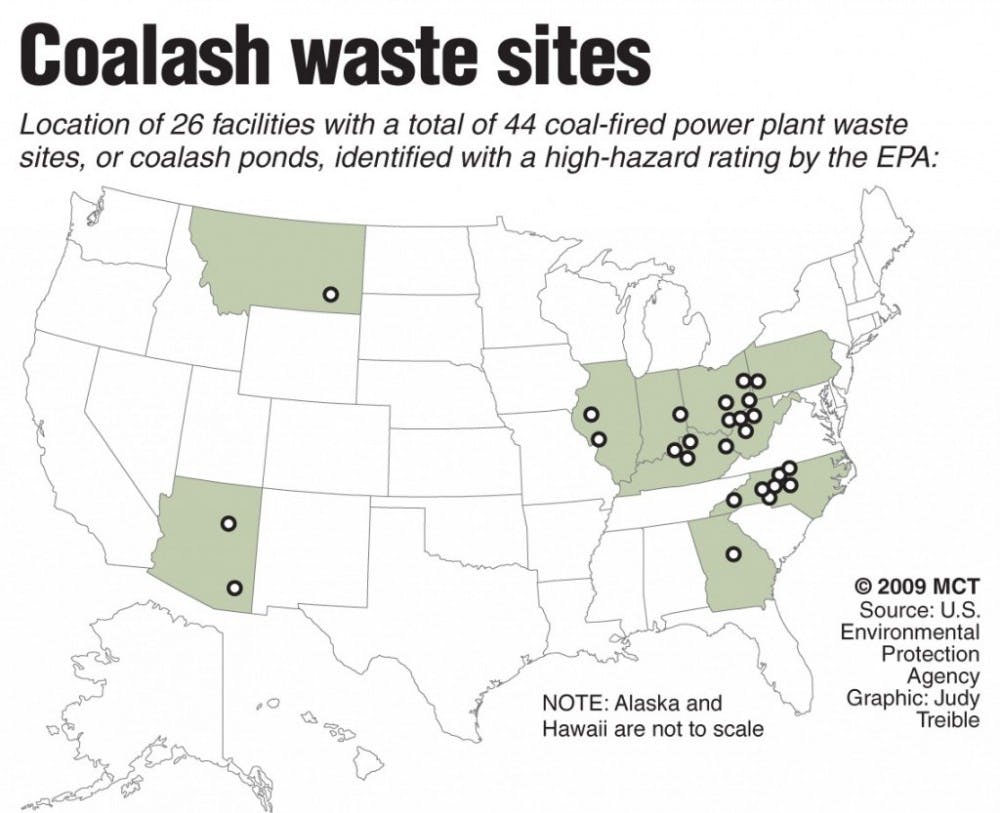 Coal ash, also known as fly ash, is the byproduct of burning coal. It is typically either stored in landfills or wet impoundments like the pond in Eden, N.C. or recycled into concrete. Coal ash contains toxic heavy metals like lead, mercury and arsenic. Image courtesy of MCT Campus

North Carolina is the catalyst for one of the first appeals court hearings on the constitutionality of “speech and display laws.”

Speech and display laws require a patient seeking an abortion to receive an ultrasound beforehand while a doctor gives a medical description of the fetus displayed.

A 2011 law in North Carolina contained a speech and display provision, which was deemed unconstitutional by U.S. district court judge Catherine Eagles Jan. 14. But now, N.C. Attorney General Roy Cooper said he will appeal the ruling to the 4th Circuit Court of Appeals.

“While I oppose laws like this that force the state into women’s medical decisions, the state will appeal this ruling because legitimate constitutional questions remain that should be decided by a higher court.  It is the duty of the Office of Attorney General to defend state laws regardless of whether I agree with them,” Cooper said.

Scott Gaylord, associate professor of law at Elon University, said the outcome of this case will be particularly important because so far, only the 5th Circuit Court of Appeals has ruled on speech and display laws.

In Texas, a similar bill was signed into law, and the 5th Circuit determined whether the information doctors had to provide was truthful and non-misleading.

“The 5th Circuit held that ultrasound images are the epitome of truthful, non-misleading information since it’s an exact image of what’s going on in utero, so they held that this falls within the abilities of the state to regulate,” Gaylord said.

“This law was never about protecting women or advancing women’s health and safety,” Johnson said. “The court found that, in essence, this law would force medical professionals to act as a mouthpiece for the state legislature and for politicians that are hell-bent on making a woman feel judged and ashamed for the decisions she makes with her pregnancy.”

Johnson said she was happy to have one of the few circuit court hearings on speech and display laws come out of North Carolina.

From a legal perspective, the 4th Circuit case is a novel one because it is one of the few cases surrounding abortion that deals with the First Amendment.

“A lot of the time, when we think about abortion-related regulations, we think about due process because of Roe v. Wade, Planned Parenthood v. Casey and other big cases in this area that have been decided on due process grounds,” Gaylord said. “It’s a new twist, a new approach to challenge this type of legislation.”

If the 4th Circuit eventually decides the speech and display provision is unconstitutional, Gaylord said this would make a Supreme Court appeal more likely to succeed.

“It doesn’t guarantee anything, but it increases the chances that the Supreme Court may take up the case to resolve the tension between circuits,” Gaylord said.

While the ultrasound provision is being taken up in the courts, the rest of the 2011 law that included other regulations on abortion are still in effect or set to take effect. Johnson was not put off by this fact and said she believes there will be a gradual process where other abortion regulations Planned Parenthood does not agree with will be challenged in court.

“This is the third case that has been heard, and there will likely be others,” Johnson said.

Politics of the court

While the 4th Circuit is known as one of the more conservative circuits in the country, Gaylord said anyone trying to predict the outcome based on this stereotype alone may not be successful.

“Historically, the 4th Circuit has been known as a conservative court. There have been a lot of appointments during the Obama administration, so that’s less true now, I think, in terms of broad generalizations,” Gaylord said.

Although Cooper said he would defend the provision in court, Gaylord said proponents of the provision may feel uneasy, given that Cooper is a Democrat and his statement includes his personal disapproval for the law.

Gov. Pat McCrory, on the other hand, said he does not think the ruling should be appealed because it will be costly and most of the law is still in place.

“I do not believe costly and drawn out litigation should be continued concerning only one provision that was not upheld by the court,” McCrory said.