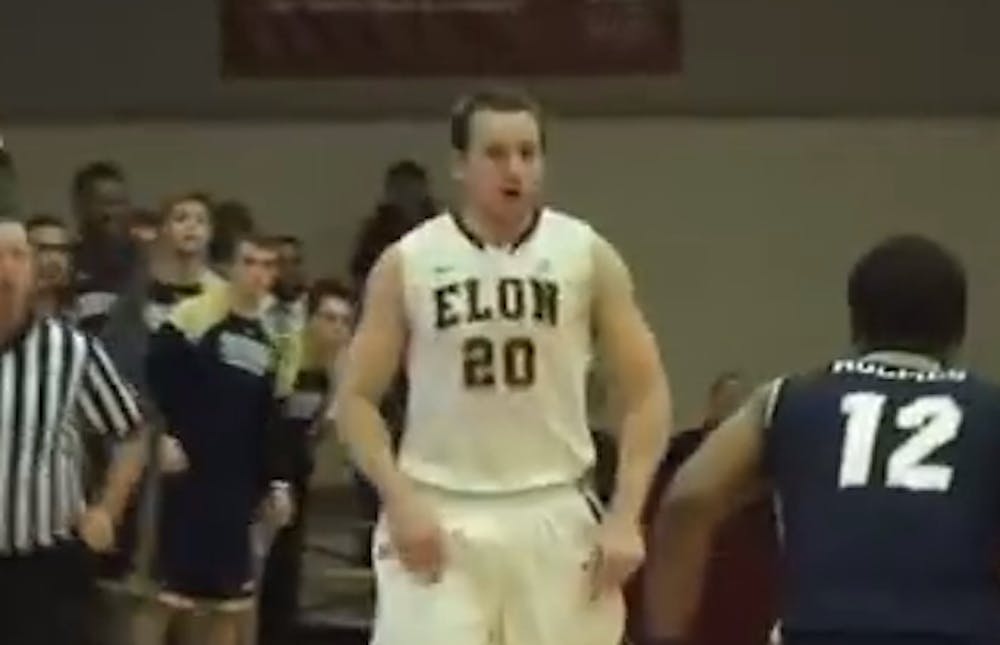 ELON, N.C.-- With its leading scorer out with the flu and an abysmal shooting performance to show for on the night, the Elon University Men's basketball team managed, against all odds, to hang around long enough to set up a game-winning three-pointer by Jack Isenbarger to top Georgia Southern in dramatic fashion, 60-59, on Saturday, Feb 8.

Trailing by two with 9.8 seconds to go and senior forward Ryley Beaumont inbounding the ball for the Phoenix, Isenbarger cut toward the baseline only to become tangled up with his man and go sliding out of bounds.

"I was trying to get open for Ryley and I just took one cut and I think I stepped on my guy's foot and we got tangled up and fell down," Isenbarger said. "I thought they were going to call a foul. By the time I got the ball there was only five or six seconds left."

From there Isenbarger took a few dribbles and proceeded to drain a rainbow from nearly 30 feet out with .7 seconds left and send the Alumni Gym crowd into a frenzy.

"What a tremendous moment," Elon Men's Basketball coach Matt Matheny said. "Our guys didn't panic and Jack made a big shot. He's a gutsy player and a special person."

Going into the final play Isenbarger was just 2-16 from the field and 1-12 from beyond the arc.

Despite Isenbarger's poor shooting night, there was little doubt who would be getting the ball for the final shot.

"We knew they were going to go to him," Georgia Southern Men's Basketball Coach Mark Byington said. "Give him a lot of credit. He had an off night, he was struggling and he a lot of courage to step up and make a big shot."

The final 10 seconds withstanding, very little went right for the Phoenix offensively on the night.

"We got a lot of good looks but they just weren't dropping," Beaumont said. "A lot of in and outs and some off shots, but I guess some nights they just aren't going to fall. I think we were a little bit out of rhythm not having [leading scorer and rebounder Lucas Troutman], our big option inside, but I think by focusing on stops we were able to keep ourselves in the game."

After jumping out to an 8-2 lead and scoring on its first three possessions, Elon missed 16 of its next 19 shots and Georgia Southern pulled ahead by seven several times in the half.

A 10-2 run over the final three minutes of the half helped to give the Phoenix a 35-32 lead at the break.

Coming out of the half Elon seemingly could not buy a shot and suffered through one stretch of nearly 13 minutes with only one made field goal.

But the Phoenix caught fire when it mattered, going on a 9-2 run over the final 2:10 to improve its winning streak to a season-high four games.

"We kind of stayed even-keeled mentally and continued to fight," Isenbarger said, "whereas in years past, I think we would've gotten down on ourselves and kind of almost given in to that frustration."

For the second straight game, Beaumont led Elon with 14 points and added 13 rebounds and Isenbarger added 10.

Guard Jelani Hewitt paced the Eagles with 20 points and Kyle Doyle added 12 in the losing effort.

Elon returns to the court Wednesday, Feb. 12 at 7 p.m., when the team travels to Greenville, S.C. to take on Furman.