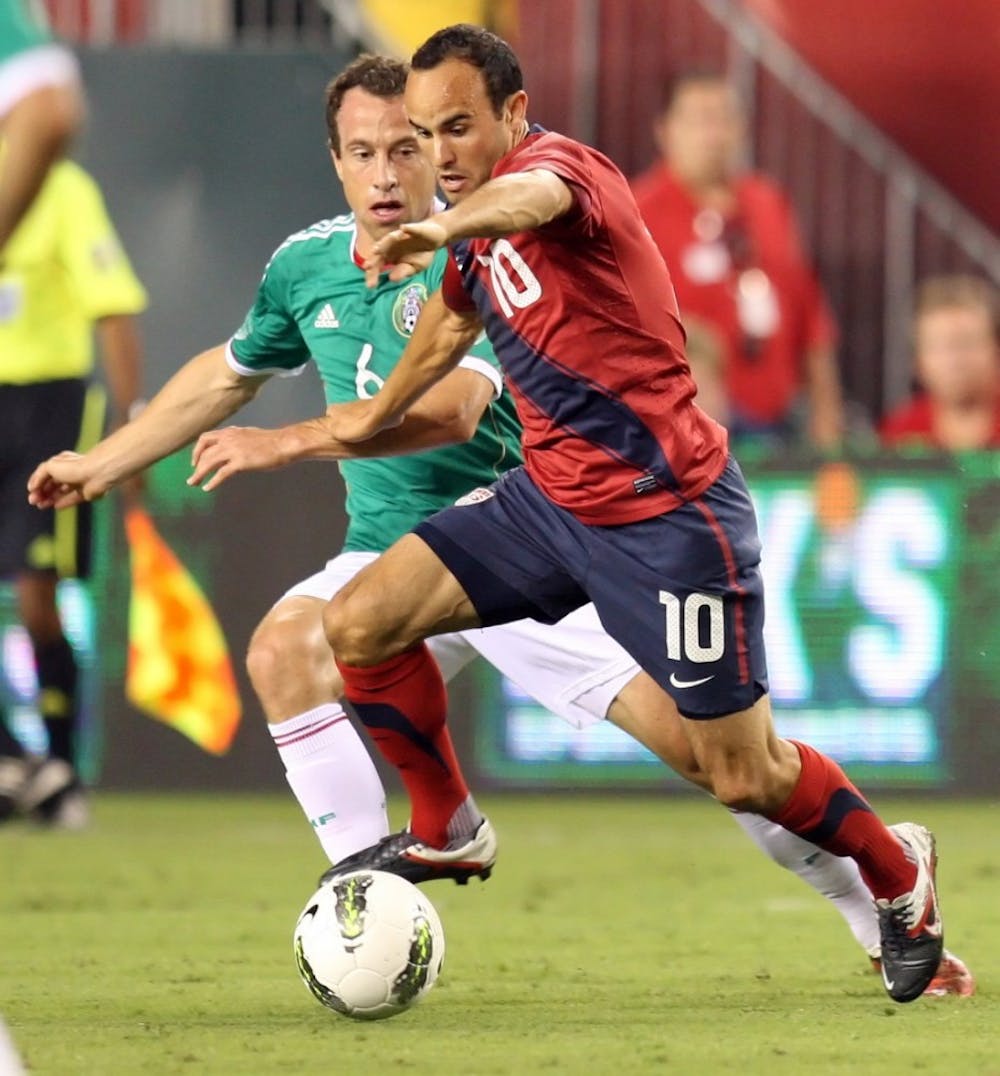 USA's Landon Donovan (10) and Mexico's Gerardo Torrado (6) compete for the ball during the first half of an international friendly at Lincoln Financial Field in Philadelphia, Pennsylvania on Wednesday, August 10, 2011. (Steven M. Falk/Philadelphia Daily News/MCT)

The United States men’s national soccer team appeared to have gotten lucky with an easy draw for the 2010 World Cup in South Africa. Unfortunately, it doesn't seem that will be the case this time around.

With the pots set for Friday’s World Cup draw, the United States is in the position it was in just eight years ago in 2006: bracing for the possibility for a “Group of Death.”

A Group of Death is when there are two strong teams pitted against each other. In the 2010 World Cup, that group included Brazil, Portugal, Ivory Coast and North Korea. In 2006, the Americans were matched up against Italy, Czech Republic and Ghana.

So imagine this group: Brazil, Italy, Netherlands and the United States.

Yeah, that’s a possibility. Granted it’s the worst-case scenario, it’s possible. It would require a lot of bad luck on the American’s side.

Of the four pots, the first pot includes the eight seeded teams — host-Brazil along with Argentina, Colombia, Uruguay, Spain, Germany, Belgium and Switzerland.

The second pot is the unseeded South American countries and the qualifiers from Africa. There are seven teams in the group. They are Algeria, Cameroon, Chile, Ivory Coast, Ecuador, Ghana and Nigeria.

The U.S. sits in the third pot made up of teams from Asia, north and central America. The group also includes Mexico, Honduras, Japan, Korea Republic, Costa Rica, Australia and Iran.

The fourth pot contains nine teams from Europe. Before the draw, one of the nine will be picked from pot four and placed into pot two to make the draw even. That team will be guaranteed to take on one of the seeded South American teams in the opening matchup. The nine teams include Croatia, Bosnia-Herzegovina, England, France, Greece, Italy, Netherlands, Portugal and Russia.

We do have to note that groups of death are not always the worst-case scenario. If a team can survive it, past tournaments have shown the two survivors normally fare well moving forward. In 2006, Italy survived the Group of Death to win the World Cup. Overall, there have been seven winners from a Group of Death and five runners-up.

So, what are the best-case scenarios for drawing teams from each pot? What about worst-case scenarios? Each pot does have a chance at a great storyline, too. Lets take a look.

We’ve already gone over the worst possible scenario above. A group of Brazil, Italy and Netherlands would mark a short stay in South America for the Americans.

Best-case: Switzerland – Lets face it, the seeded teams are daunting. But just about every country is hoping for Switzerland to be in their group. They have the seed, but do they have the team to do anything with it? Stay tuned.

Worst-case: Brazil – It’s a tough task no doubt. But it’s not one that the Americans can really get through. Brazil is the home team and they’re a favorite to win the entire tournament. Avoid at all costs.

Best story: Germany – Head coach Jurgen Klinsmann is German. The U.S. has a few German-born players. That doesn’t factor in the American’s defeat of Germany this past summer. This would be a fun draw.

Best-case: Algeria – Remember when Landon Donovan buried the game-winning goal in stoppage time to save the United States from elimination of the 2010 World Cup. If not, do yourself a favor and check out the video below. Make sure you turn the sound up. The call is just as good as the goal.

Worst-case: Netherlands – Robin Van Persie. Arjen Robben. Enough said. The Netherlands have become a force. It’s not a given they would be drawn from pot two, but because there’s the chance, I’ve put them here. This would be a very hard draw for the United States. Netherlands is also almost a lock to be a part of a group of death, too.

Best-story: Ghana – Remember this team? Who could forget the side that knocked the U.S. out in 2010 and beat the Americans in 2006 on the way to the knockout stage. Revenge is sweet, and this would be the perfect opportunity to serve it up.

Best case: Greece – Greece doesn’t score often, but they give up even less. It could only take one lucky bounce to beat the Greeks, but if that lucky bounce doesn’t come, good luck getting one past them. Greece’s style doesn’t offer much of an attack, which bodes well for the U.S., let alone any team in the World Cup.

Worst-case: Italy – This team is dangerous. They’re not seeded and that’s an issue for a lot of teams. Experience is the name of the game for the Italians, and it’s quite the contrary for the United States. Any group Italy ends up in will probably be in the 2014 Group of Death. Again, avoid at all costs.

Best story: England – The U.S. opened the 2010 World Cup against Fabio Capello’s English side. The Americans got up for the game and battled England to a draw even with an assist from England goalkeeper Robert Green. Regardless, the U.S. is a better team than it was four years ago under Bob Bradley. Both coaches are new this year, as Capello is now the coach of the Russians, but a rematch would be a good stepping stone to see just how far Klinsmann has taken this American team in his few years at the helm.