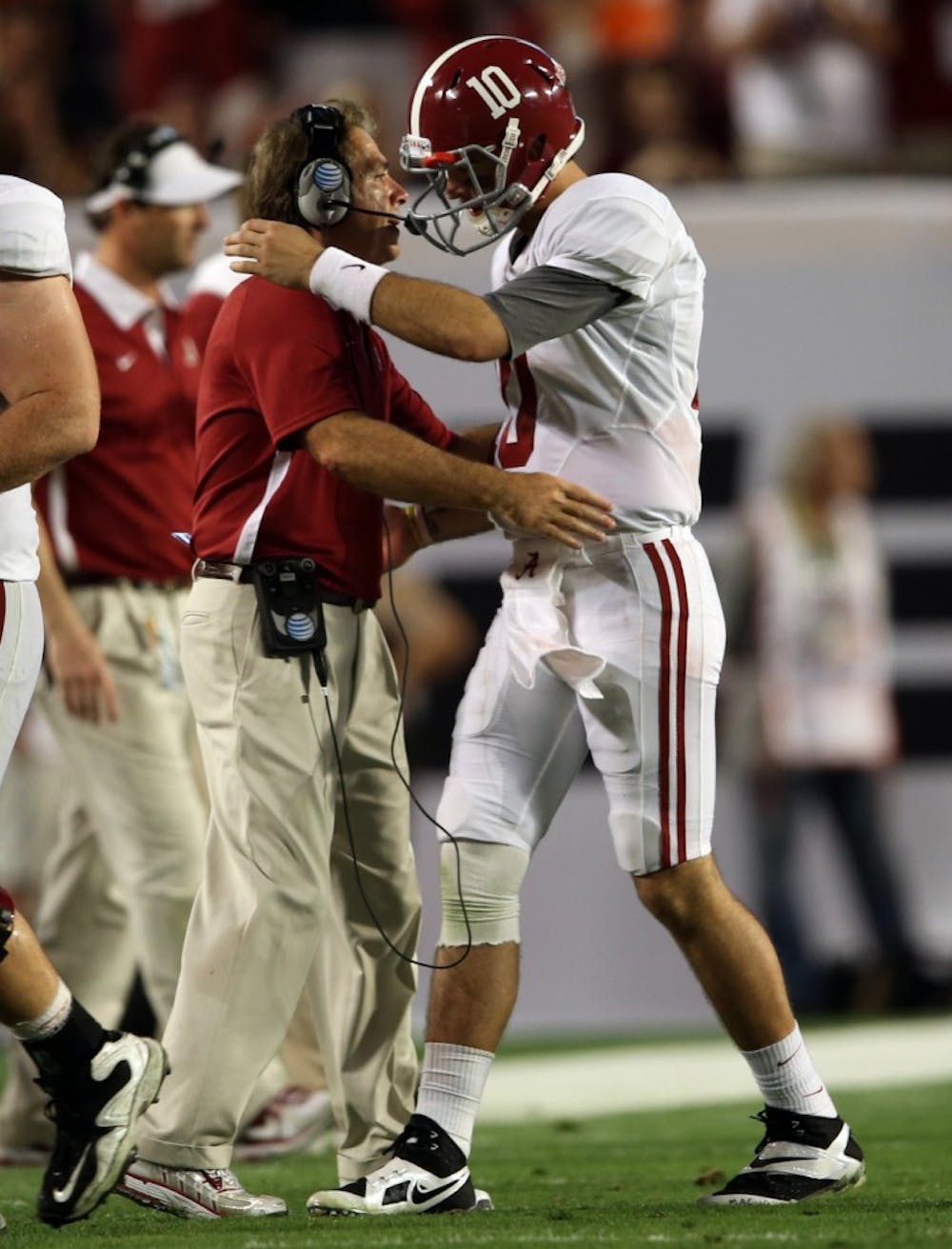 Sure, Winston has been as close to the perfect candidate as one could get on the field. He’s thrown for 3,490 yards and 35 touchdowns with just eight interceptions while leading the Seminoles to a perfect 12-0 record entering the Atlantic Coast Conference championship game against Duke University. His off-the-field integrity is very much in question with the sexual assault allegations coming against him of late. See you later, Jameis.

Manziel’s troubles were well documented throughout the offseason, but his Aggies struggled this season to an 8-4 record. The quarterback earned the trophy last year as a freshman, making him the first freshman to win the award ever. His actions this year off the field in signing illegal autographs and his arrogance on the field offer every reason why freshmen don’t win the award, so Manziel isn’t doing Winston any favors, either. So long, Johnny.

That leaves four legitimate candidates that could win the award. Each has a resume resembling the achievements warranted to win the trophy, but each also has a mark against them in some facet. However, each candidate doesn’t have an integrity asterisk by his name like Winston and Manziel.

University of Oregon senior quarterback Marcus Mariota was rolling along somewhat under the radar until the Ducks lost at Stanford University, then lost again at the University of Arizona two weeks later. Mariota’s stat line is impressive with 30 touchdowns to four interceptions, but Oregon is 2-2 in the last four games and was thumped by the Wildcats. That won’t get Mariota votes.

Jordan Lynch, a senior quarterback from Northern Illinois University, is an interesting case. The Huskies are undefeated at 12-0 this year and Lynch has only gotten better, if that was even possible, as the season has progressed. He’s rushed for 316-plus yards twice this season. Both have come in the last six games in which Lynch has run for 100-plus yards five times. The one time during that stretch he failed to cross the century mark, he ran for 99 yards on 18 carries. What’s holding Lynch back is his arm. The senior has completed 64.4 percent of his passes this year for 2,457 yards with 22 touchdowns and five interceptions. Even less underwhelming, Lynch went 5 of 17 for 39 yards last time out in Northern Illinois’ regular season finale. That’s not going to cut it this late in the season with voters watching and deciding.

Boston College senior running back Andre Williams leads the nation with 2,102 yards on the ground and 17 touchdowns this season. His mark is 327 yards more than second-place Bishop Sankey, a junior out of the University of Washington. Williams ran for an ACC-record 339 yards on 42 carries in a game against North Carolina State this season and he’s run for 200-plus yards in five of Boston College’s 12 games this season. His problem is the Eagles finished 7-5 this year with a 4-4 conference mark. It’s solid numbers that will bode well for Williams’ future, but BC’s overall record won’t help his case.

Then there’s AJ McCarron, a senior quarterback from the University of Alabama. Prior to falling 34-28 to Auburn University in the final week of the regular season, McCarron had won as many national championships as he’d lost games (2) throughout his career at Alabama.

The senior has been nothing but consistent this season for the team that was ranked No. 1 week-in and week-out until the loss this week. McCarron has thrown five interceptions this season. Three of them came in the first four games of the year. His 67.6 completion percentage sits behind Manziel and Winston, but McCarron doesn’t have the legal battles like those two have battled. McCarron has also thrown for 26 touchdowns on the year, three of which came in the losing effort to Auburn where he threw for 277 yards.

Every Heisman winner has his Heisman moment at some point throughout the year. While being consistent in his first two years as the Crimson Tide’s starter, McCarron didn’t have a Heisman moment until the final regular season game of his career in the loss to Auburn when he threw a 99-yard touchdown pass to break a 21-all tie and put the Crimson Tide up by a touchdown in the fourth quarter. It was a point in time Auburn had momentum in the game after scoring 14 straight points to answer Alabama’s 21 straight.

McCarron didn’t lose the Iron Bowl for the Crimson Tide. Four missed field goals was the difference. It wasn’t turnovers, as Alabama didn’t have any. It wasn’t mental mistakes. It was the kicking game. Last time we checked, McCarron drives senior kicker Cade Foster and the field goal unit into field goal range. That’s on top of engineering four more touchdown drives. So while McCarron and the Crimson Tide have a loss to their name, this one wasn’t on McCarron.

The Heisman Trophy is not a career achievement award. If it was, McCarron would win hands down with a 75:13 touchdown to interception ratio and two national championships to his name as the starting quarterback of the Crimson Tide. With the Heisman committee probably looking to make a choice that won’t get criticism down the road, McCarron wins hands down. After all, he seems to be the epitome of integrity and he’s proved his value week after week this season.