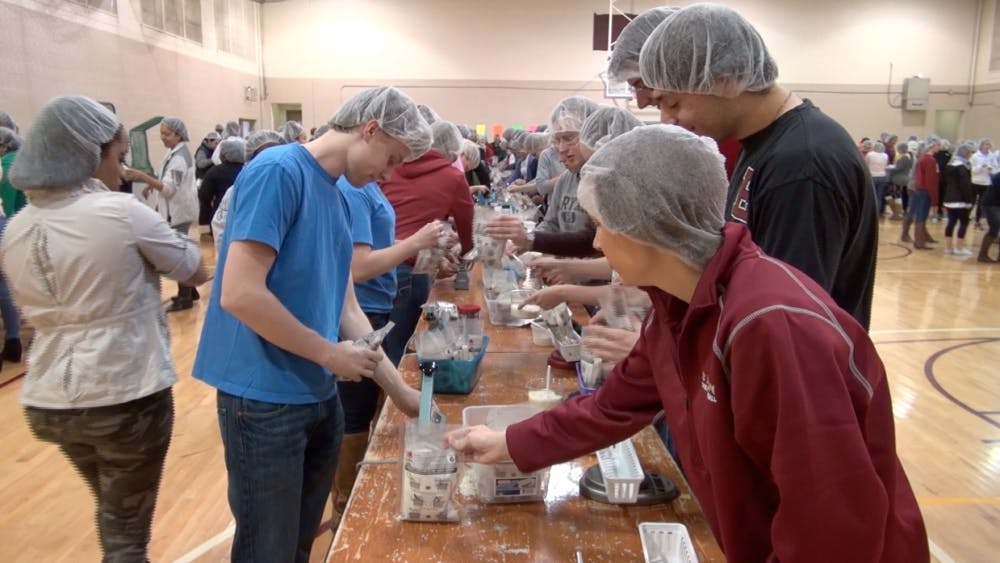 More than 250 students, alumni, and families, spent the Saturday morning of Homecoming Weekend in a gym: but they weren't playing basketball.

On homecoming weekend, volunteers could have slept or tailgated, but they instead chose to feed the hungry.

Stop Hunger Now's Assistant Program Manager, Ryan Howefor, said, "It's awesome to see that they woke up early and are willing to give two hours of their time to package meals and feed those less fortunate."

Volunteers filled bags with dried vegetables, soy, and rice. Campus Kitchen Coordinator, Steven Caldwell, was one of them.

"It's not much, but it's enough to keep children and their parents going in some of the hardest of times," said Caldwell.

And the process was simple. All the meals were funneled, carried, weighed, sealed, and later delivered to a truck on its way to a developing country.

Organizers aren't exactly aware of where this food will go. But they do know it will go to children in need across the globe.

"They're hungry. They need food," said Howe. "They have weak bodies. They need a nutritious meal. [By] getting these people together to package [and] getting the community together, we can end world hunger."

Stop Hunger Now has donated over 100 million meals to people across the world. This is the fourth annual event at Elon, and volunteers say it won't be the last.