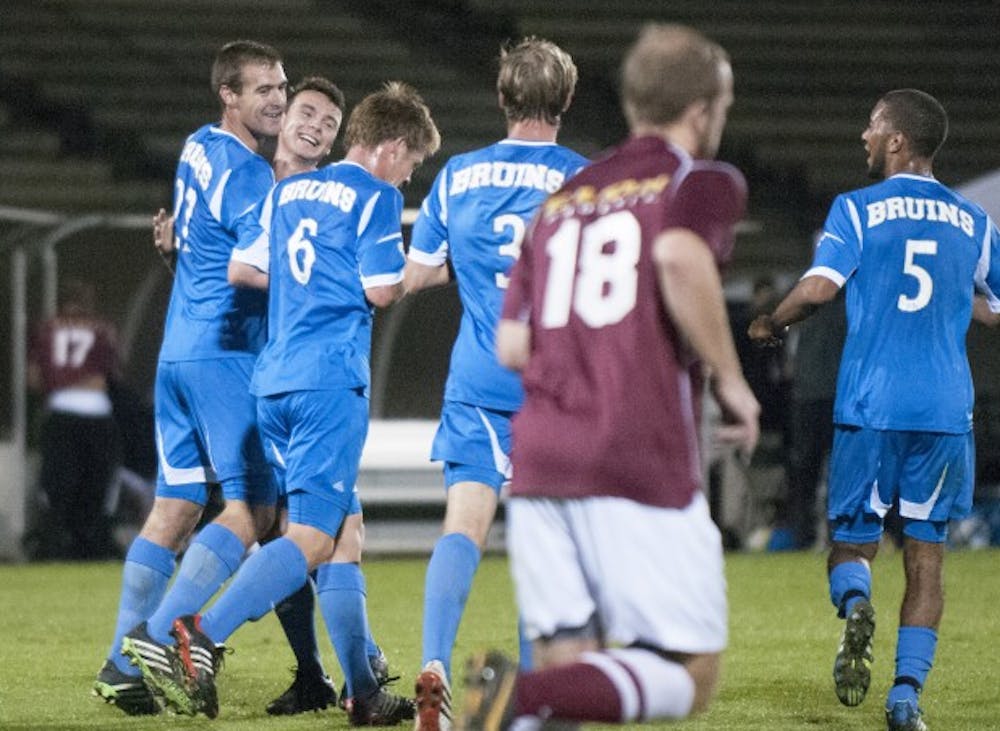 Photo courtesy of The Daily Bruin.

The Elon University Men's Soccer Team's historic season came to a sudden end as UCLA defeated the Phoenix 4-0 in the tournament's second round on Sunday, Nov. 24 at Drake Stadium in Los Angeles.

This loss concludes Elon's record breaking season. Throughout it, the Phoenix won its third straight Southern Conference Championship, got its first ever NCAA Tournament win, and tied the school record for Division I wins with 15.

Their remarkable season also consisted of Head Coach Darren Powell receiving the most wins in the program's history. Elon finished the year with a 15-5-3 record.

With the victory, the UCLA Bruins, the tournament's top overall seed, moved on to the third round where they will meet the UConn Huskies.

"UCLA is a very talented team, but I felt we had big spells in the game where, if we'd have just gotten a goal in one of those spells, it might have been slightly different," Coach Powell said. "I'm a little disappointed with the result, but I couldn't be more proud of the guys and what they've achieved this year."

Despite being more than two-thousand miles from campus, Elon's fan support was incredible, drawing even a remark from UCLA's radio crew during broadcast.

"The fan base has been terrific," Powell said. "Tonight was great, [Thursday against Clemson] was great. The messages of support: we feel we're not playing for only Elon Men's Soccer, we're playing for the whole Elon community."

UCLA was in control from the game's first kick, putting Elon onto its heels with an unrelenting style of attack that rewarded the Bruins with three goals in the first period.

In the 12th minute, UCLA midfielder Grady Howe found a wide-open Victor Chavez in the box where he scored his first of two goals, netting a back heel past Elon keeper Nathan Dean. The Bruins scored again ten minutes later when Joe Sofia received a corner kick from Pac-12 Player of the Year, Leo Stolz, and slotted the ball just inside the near post to boost the lead 2-0. In the 31st minute, Aaron Simmons made it a three-goal game when he headed in a free kick from Stolz, the second of Stolz's game-high three assists.

Elon came out much stronger in the second half, pressing forward and getting several shots on net. The additional pressure did not translate to goals though.

"We couldn't get enough momentum," SoCon Player of the Year, Daniel Lovitz, said. "We had our chances and it really didn't fall for us and they just finished theirs and that's the game."

Chavez scored his second goal of the game in the 54th minute, giving UCLA their fourth and final goal.

The game ended with a 4-0 score line in UCLA's favor, despite Elon holding an edge in both shots and corner kicks with 12-9 and 6-2 advantages.

"Its been great all year; it was a lot of fun," Howard said. "It was unfortunate that we couldn't come out with the win, but its been a great season. We had a good run and it's something we're really proud of."

Looking forward, the Phoenix will be moving to the Colonial Athletic Association for the 2014-2015 season.

"Moving leagues will present us with some interesting and different scenarios," Coach Powell said. "The goals will be the same. We want to get back to this stage and create more history for the university."