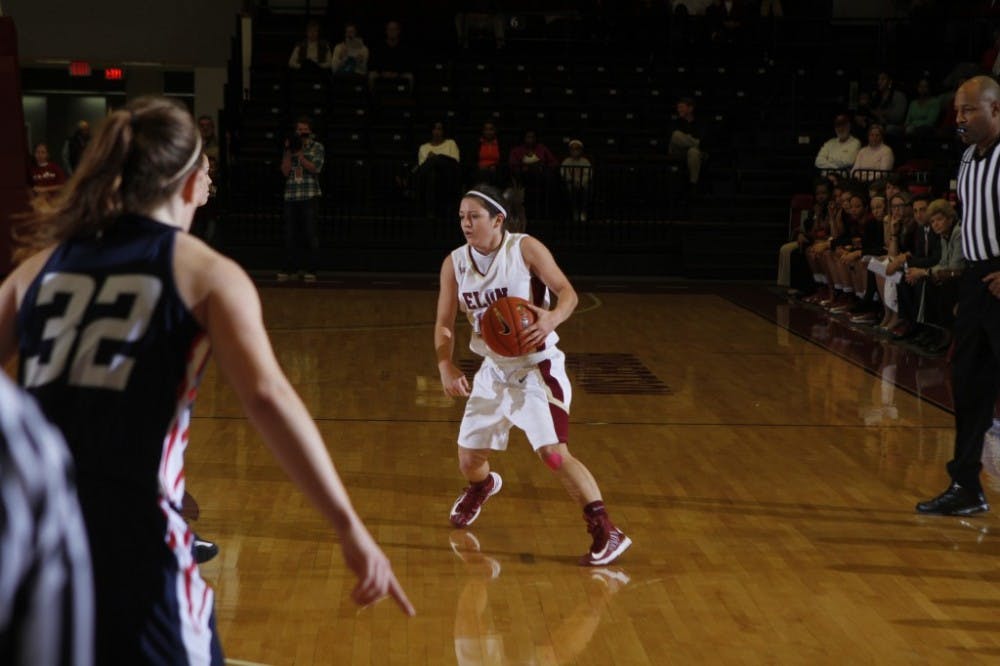 Collegiate sports teams across the country have to cope with the loss of seniors on a yearly basis, and the Elon University women’s basketball team is no different. This year, the Phoenix will be without arguably two of the best players the program has ever seen: forward Kelsey Evans and guard Ali Ford.

“Ali and Kelsey definitely brought a great dynamic for us,” said Elon head coach Charlotte Smith. “This year is just a challenge for other players to step up and take up that slack.”

Both Ford and Evans started in all 33 games for the Phoenix last year, but the two had been making an impact during each of their four years. Ford ended up being both Elon’s and the Southern Conference’s all-time leader in three-pointers made. She finished second in Elon’s record books for career points scored. Evans holds the program records for career blocks and rebounds. She is also the only Elon player to score 1,000 points and grab 1,000 rebounds in her career.

“They were obviously a huge part of our team last year, so we are trying to fill those gaps,” said junior forward Sam Coffer.

With sophomore Nicole Razor sidelined with a hip injury until December, freshman Lauren Brown will be running the point for the Phoenix. The Alpharetta, Ga., native will be faced with the tough challenge of not only running the Elon offense as a true freshman, but replacing a program great like Ford.

“I think Lauren Brown is going to do a great job for us because she’s committed to being the very best she can be,” Smith said.

When Razor does return, she will look to contribute with her defense.

“I’m not a big scorer, but I love to play defense,” Razor said. “I think my defense is what’s going to help make this team successful.”

Lenaira Ruffin is the other freshman who will look to add much-needed depth to the Phoenix backcourt. Ruffin provides a bit of local flair for the Phoenix, as she attended River Mill High School in Graham, N.C.

Ruffin and Brown will provide perimeter shooting to the Phoenix offense. The two freshmen will join Coffer, senior guard Kelsey Harris and junior guard Zora Stephenson as the threats from beyond the arc.

“It’s going to take some time, but [the freshmen] are starting to get comfortable with the game,” Razor said. “There is no replacing an Ali Ford. All we can do is bring that intensity and passion she brought every game.”

Even without Evans, the Phoenix offense will run through the post players.

“It’s not so much about threes,” Razor said. “It’s all about our inside game. Our inside game has been very dominant. We have to keep pounding it inside, and that’s going to be our game this year.”

Coffer and fellow junior Shannen Cochraham as well as freshman Jenifer Rhodes will be the major contributors in the Phoenix frontcourt.

“We all spent time over the summer and in the preseason working hard, gaining and developing our skills,” Cochraham said. “So we can be a presence just like Kelsey was.”

Arguably the biggest buzz out of the team’s preseason is the emergence of Rhodes. Her athleticism and size have captivated players and coaches alike.

“[Rhodes] is definitely going to contribute right off the bat,” Coffer said. “She’s really great at finishing around the basket and she’s a pure post player.”

Smith realizes the downside of starting two freshmen: mistakes. But Smith said she is simply asking the freshmen to give a great effort whenever they are on the court.

Even with capable bodies lined up to replace the departed Ford and Evans, the production also has to be replaced. Ford averaged 15.8 points per game, while Evans averaged 15.5 per game as well as 8.3 rebounds.

“I think we’ll get our scoring done by committee,” Smith said. “I’m not concerned about where the points are coming from. The players know there are a lot of question marks with the void of Ali and Kelsey, but everybody’s ready to step up for the challenge.”

Evans and Ford will be remembered for their accomplishments in Elon uniforms, but for the rest of the Phoenix, there’s no time to look back.

Elodia Castillo visited Elon University Feb. 25 for her speaker tour La Lucha Sigue, or “The Struggle Continues,”  to talk about the struggles of indigenous Mayan communities being erased in Guatemala, and their efforts to reclaim the land and ancestral practices that were once theirs.

With student government elections fast approaching, candidates are gearing up for the campaign. The race for executive vice president will be between juniors Jonathan Stettler and Robert Cain.

Casting your vote for the SGA elections

Presidential candidates battle for the top spot in Elon's SGA

BEHRENS & SHOLAR: Leave your mark, fill out the 2020 Census

Which area grocery store has the cheapest items for college students?