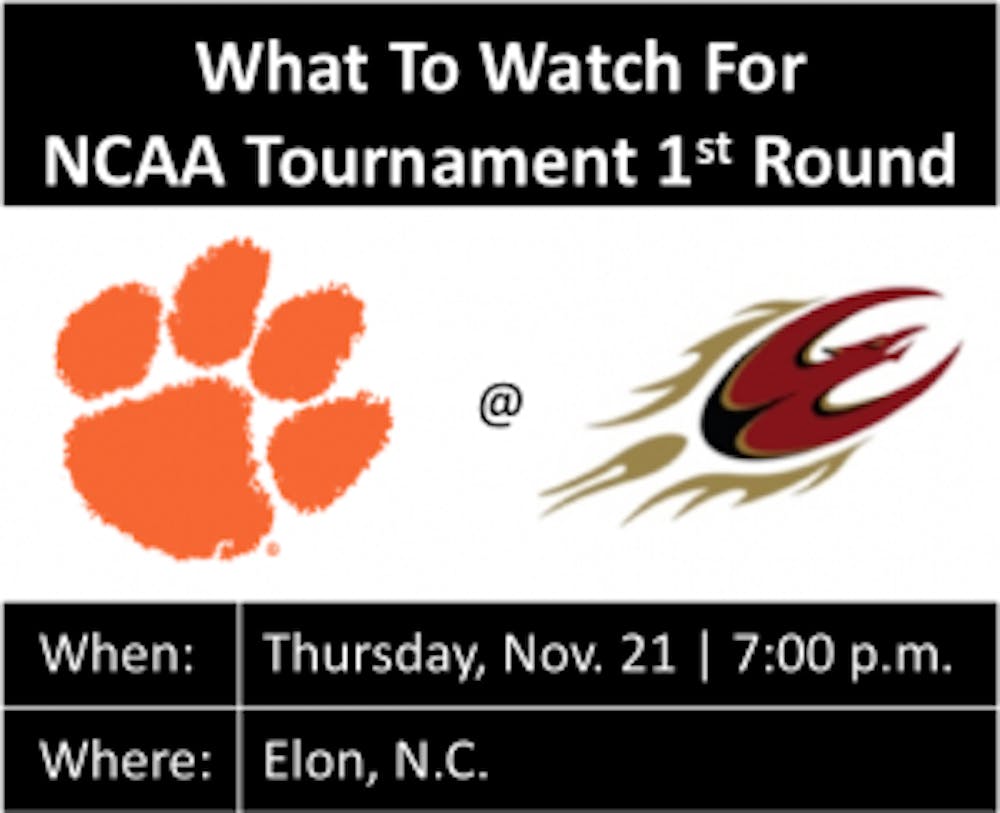 After winning the Southern Conference Tournament on a goal in double overtime from junior forward Jason Waterman on Sunday against Wofford College, the Elon University men’s soccer team will host Clemson University of the Atlantic Coast Conference Nov. 21, in the first round of the NCAA Tournament.

The match between the Phoenix and the Tigers is set for 7 p.m. on Rudd Field. It’s the first time Elon has hosted a first round matchup.

“We’ve seen Clemson a couple times this year, but we haven’t watched them in detail,” said Elon head coach Darren Powell. “We’ll prepare the team like we would for any other game. We are very fortunate that we can sleep in our own beds so we can prepare ourselves at home for Thursday night.”

Elon has never won a NCAA Tournament game. The team’s first two appearances in the tournament have come in each of the last two years. Both times, Elon has traveled to Myrtle Beach, S.C., for first round matchups with Coastal Carolina University.

“It’s nice to see our name not next to theirs and knowing we don’t have to go back to Myrtle Beach,” said senior midfielder Daniel Lovitz.

"I'll have to cancel those hotel reservations," Powell joked.

Dating back to 1998, Elon and Clemson have matched up six times with the Phoenix leading the series 3-2-1. Overall, Elon has won the last three contests in the series. Most recently, Elon topped the Tigers in 2011 by a score of 1-0 in Rhodes Stadium.

This season, Elon finished with a mark of 15-4-2. The Phoenix defeated Wofford in Greenville, S.C., Sunday to earn the Southern Conference’s automatic bid to the NCAA Tournament.

“When your name is on that board, it’s special,” Powell said. “It’s such a difficult task to make the event, so to see our name on there fills you with pride. I’m just so happy for these guys. They’ve worked so hard every day for that moment and you go back to the winning goal in the SoCon Tournament and you know what it means. You see all those guys chasing each other, it’s just a great feeling of pride for these boys and what they do. Now to have a home game as well, they should be very proud.”

Clemson finished with a record of 11-7-2, 5-4-2 in ACC play. The Tigers fell to eventual ACC champion University of Maryland in the semifinals of the ACC Tournament.

In two games this year against ACC teams, Elon went 1-1 with a win at home against then-No. 9 Wake Forest University and a loss on the road against Duke University. The Phoenix was shut out 3-0 at Duke Oct. 22, marking  the last time the Phoenix has lost a match.

The Tigers played two games this season against SoCon teams. With both contests at home, Clemson beat the UNCG Spartans 2-0, but fell to Furman, 2-1, Oct. 15.

Elon is the only SoCon team to make the tournament field of 48 while Clemson is one of six ACC teams in the field. The winner of the contest earns a trip to Los Angeles to take on the top seed in the tournament, UCLA.