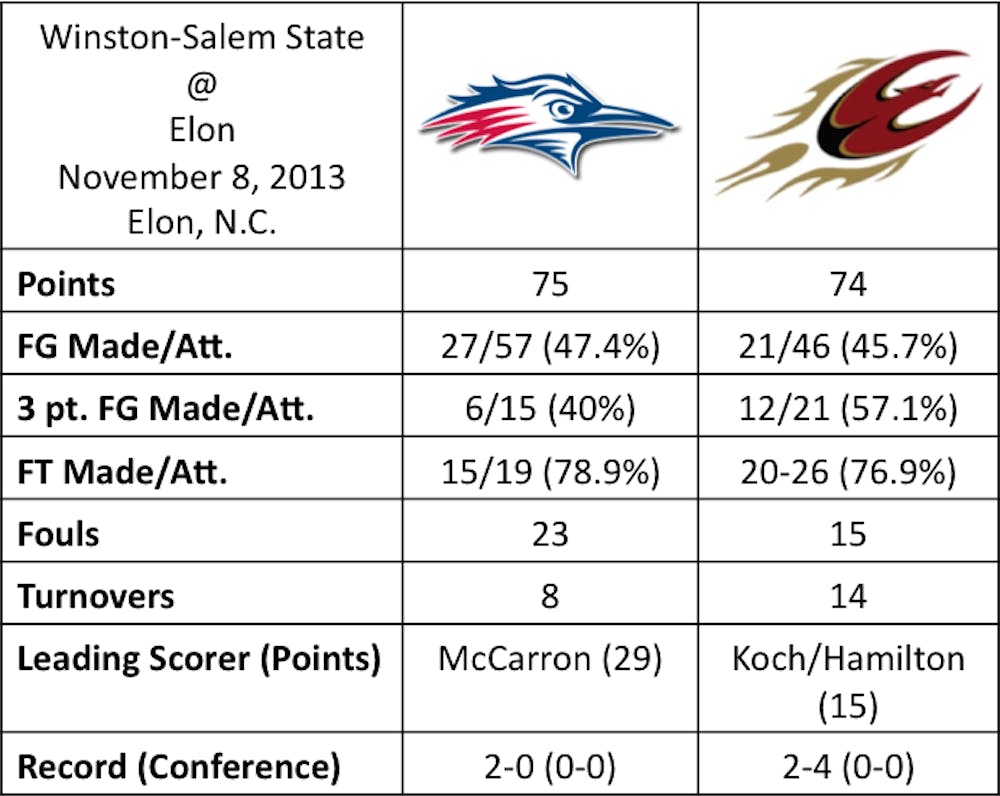 Up by one point with 13.7 seconds to go, Metro State University went to the free throw line shooting a 1-and-1 with a chance to go up three one the Elon University men’s basketball team. Junior guard Mitch McCarron missed the front end of his opportunity and the Phoenix came down with the rebound.

Elon had three looks at the basket in the final seconds, including a shot at the buzzer in which senior guard Sebastian Koch looked to be fouled. Elon head coach Matt Matheny argued briefly but to no avail as the Roadrunners, the No. 1 Div. II program in the country, escaped a hard-charge from the Phoenix in the second half to hold onto a 75-74 victory in Alumni Gym Monday, Nov. 25, in the NIT Season Tip-Off.

It’s the fourth straight loss for Elon after starting the year 2-0. Because Metro State is a Div. II program, the game is considered an exhibition for them. Their record remains at 2-0.

Elon trailed 40-29 at the half and the Roadrunners stuck around the 10-point margin throughout the first 10 minutes of the second half until the Phoenix started to make a run keyed by multiple three-pointers from Koch, senior guard Jack Isenbarger and sophomore guard Tanner Samson.

Isenbarger hit three three-pointers in a span of two minutes to get the Phoenix within six at 62-56 with 8:07 to play.

Elon kept close to the Roadrunners throughout the remainder of the game and pulled within one point with 1:24 to play after Samson knocked down a three that sent the Alumni Gym crowd into a frenzy.

Halfway through the second half, the Phoenix’s defense clamped down on the Roadrunners’ offense, which helped key the Elon run. While it didn’t shut Metro State down completely, the Roadrunners were forced to settle for long-range jumpers that weren’t going down as much as the short-range shots.

McCarron finished with a game-high 29 points on 11 of 16 shooting. Senior guards Raul Delgado and Brandon Jefferson each finished with 11 points in the contest for the Roadrunners.

Metro State at times played a full court press that forced the Phoenix into 14 turnovers. The Roadrunners scored 15 points on those miscues while Elon scored 12 points off eight turnovers from Metro State.

Elon was outrebounded 32-28 in the contest and Metro State pulled down nine offensive rebounds.

Elon finishes the NIT Season Tip-Off Tuesday, Nov. 26, when the Phoenix take on Georgia State University at 7:30 p.m. The tip will come after Canisius College takes on Metro State at 5 p.m.