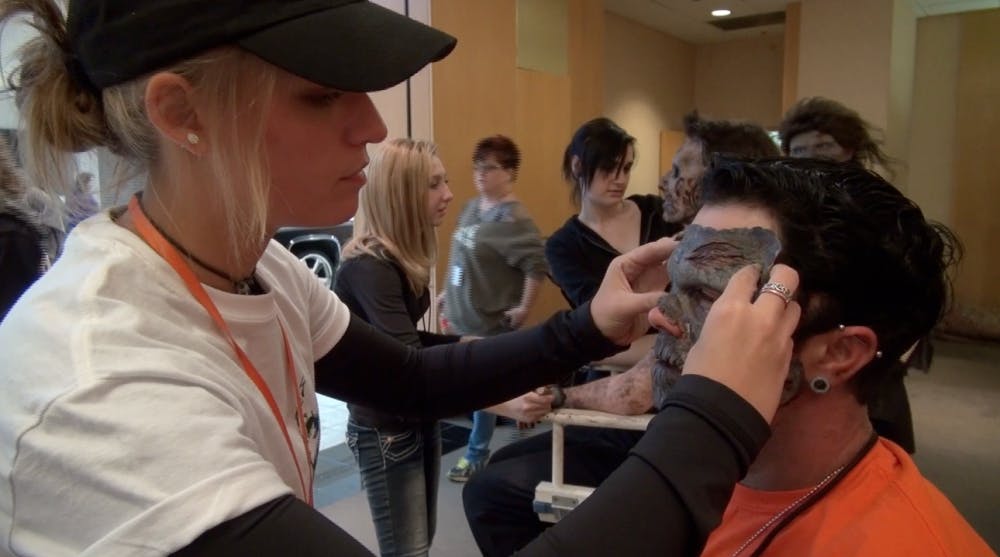 Actors, make up and a crowd are just some of the ingredients for putting on a good show. But this Saturday the performers at an annual production at the Holly Hill Mall weren't as lively as usual. They looked like Zombies - with rotting flesh, a slow walk and a hunger for humans - and it was all part of the Annual Zombie Walk at the Holly HIll Mall.

The goal: raise money for the Alamance County Humane Society, a local non-profit. But without the work of one high school senior, Christine Perry, none of this would have been possible.

"I feel like being young doesn't have anything to do with it," Perry said. "It's just going out there and saying 'Hey, this is what I'm doing, can you help me out?'"

Perry is one of the many brains behind the Hollywood Horror Show and Zombie Walk. This is her third year involved with this event and she said it came with more responsibilities.

"I had to organize getting the Humane Society here, and the sponsors for my shirt and for the event," Perry said. "Businesses are always all for charities. I found out this year the humane society is the biggest charity we have in this town so I was like sweet!"

While Perry played a big role in setting up the show, her true passion lies in the make-up.

"I love to play with the colors and play with the different materials we have to make sure the character looks not human," Perry said. "That's our goal here, to make everything seem surreal."

Perry did the makeup for most of the characters in the show, including Brandon Wagner, a Zombie-makeup veteran. He's been doing makeup for 17 years and says Perry is talented.

"She's great I mean she learns things pretty fast," Wagner said. "She does an amazing job. I learn stuff from her now."

Perry said one of the hardest parts about zombie make-up is continuity: making her characters look the same year after year. She and the other talented artists base their Zombie characters from famous movies and shows. This way each character is unique and specific.

"It's always a challenge for me because to be able to do something exactly how I did it before is basically impossible," Perry said. "I want to get it as close as I can."

Perry said she wants to work with theater or movie makeup after she graduates, but for now her time is focused on what she calls "her creations".

If you want to see more of Perry's work, check out the Original Hollywood Horror Show. It's located on 6333 Bass Mountain Road, in South Carolina and runs until Nov. 2nd from 8 to 11 p.m. during the week, and 8 p.m. to midnight on weekends.

Tickets are 20 dollars per person and can be purchased online or at the door.