Elon’s take on BuzzFeed: the new news or new distraction? 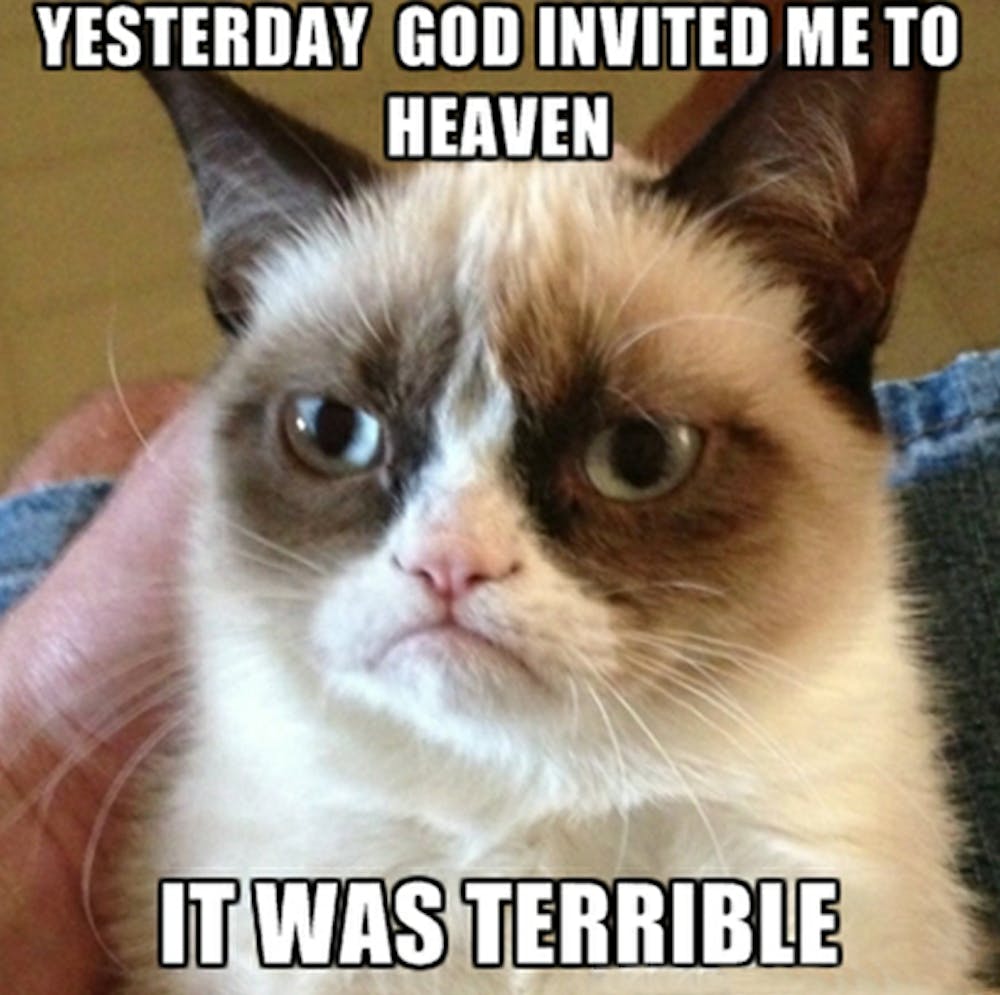 “Grumpy Cat” is well-known on BuzzFeed for his frown and, with the help of text, negative outlook on everyday life. Photo courtesy of BuzzFeed.

It’s the bane of every teacher’s existence. It clutters Facebook homepages. It draws people of all lifestyles in with articles like “10 Peculiar Works of Art Featuring Donald Trump” and “23 Moments of Beyonce Realness.”

At Elon University, students appear split on BuzzFeed’s attraction. The site reels in more than 80 million monthly visitors, and, since the site expanded to Twitter and Facebook, the media network reaches about 300 million additional people.

BuzzFeed is the new source of all things viral. This media platform features articles, pictures, GIFS,  videos and posts topics examining everything from “twerking” to the suspected chemical warfare in Syria.

BuzzFeed also allows users to upload their own content for visitors to view. Elon Tonight, Elon’s sketch comedy show, has posted a couple videos to their BuzzFeed channel and recieved thousands of views.

As part of a major upheaval in the world of advertising, BuzzFeed leans away from the traditional idea of marketing. Instead, the site focuses on “social advertising” to encourage visitors to share across multiple social media platforms.

But the social aspect of BuzzFeed has some students questioning its influence on college life, when many students try to avoid procrastination and distracting websites.

“I think BuzzFeed is an incredible way to waste time,” said senior Kevin Ridge. “It’s the new StumbleUpon or the new Cracked.com. It’s a fun way to sit down and do nothing. It’s a more effective waste of time than Facebook.”

“I actually rarely use BuzzFeed, except for when people post links to it on Facebook,” she said. “I probably see at least one a day.”

BuzzFeed fits in with other web outlets like Twitter and Vine, which encourage shorter content for faster consumption. With so much constant action in the world of entertainment and news, BuzzFeed adds another dimension for Elon students to easily consume information.

Gailey said she generally goes right to the “What’s Hot on the Web” section so she can streamline her already tailored content. This way, she can also see what other users are viewing.

BuzzFeed’s sole focus is finding what is viral and trending on the Web, and then reposting it to its readers in the form of lists with catchy and intriguing headlines, which students struggling with procrastination or boredom in classes often find satisfying.

BuzzFeed has been used by brands such as General Electric and Coca-Cola to extend the reach of their advertising over the vastness of the Internet. BuzzFeed’s unique setup allows advertisers to showcase their products in advertisements that millions, including students, will read and scroll through.

Some Elon students have joined the fad and fallen under the spell of catchy titles and easy-to-read lists.

Many students said they are drawn to headlines involving celebrities, their favorite shows or a humorous photograph. In an age of social entertainment, BuzzFeed curates not only topics, but mediums as well.

“BuzzFeed always keeps me updated on what is trending in pop culture,” said junior Emma Kwiatkowski. “It helps me relate to others through funny video clips and photos.”

While there are many critics out there who don’t like the idea of news being condensed down to its simplest form or do not approve of BuzzFeed’s sometimes empty content, junior Katie Maraghy sees a more positive aspect of BuzzFeed’s content.

“While it isn’t a conventional venue for news, it may educate a percentage of those clicking on the site without them realizing, not unlike ‘The Colbert Report,’ where many tune in for comedy and absorb some national news along the way,” Maraghy said.