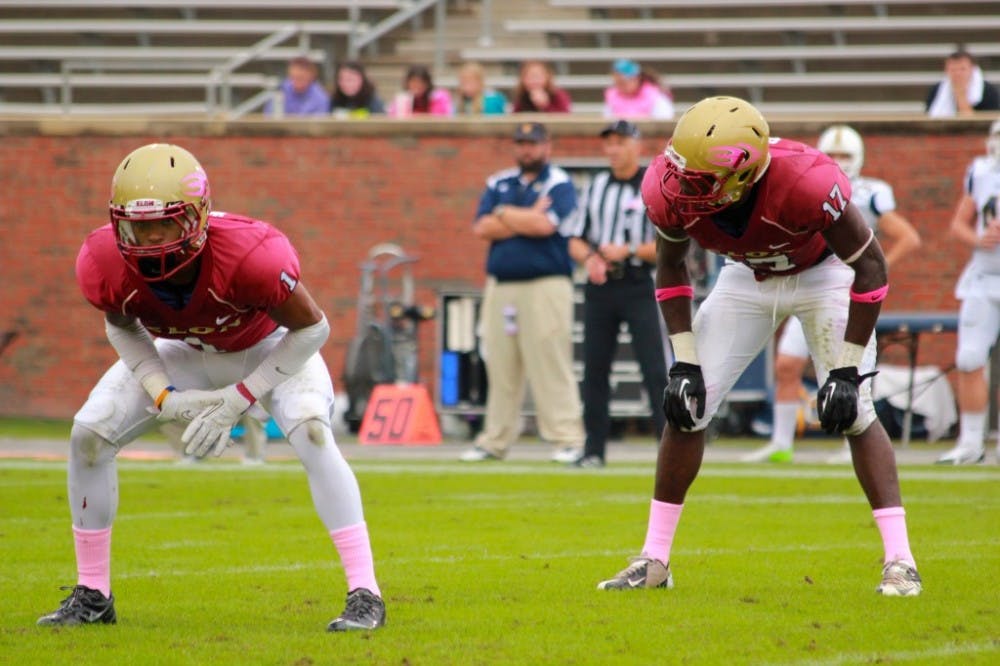 The Elon special teams unit scored all of the Phoenix's points against Chattanooga, as kicker John Gallagher went 3 for 3 on field goal attempts in the game. (Photo by Ashley King, staff photographer)

Billy Bob Thorton’s character Gary Gaines said in the movie Friday Night Lights, “There ain’t much different between winning and losing.” In Elon’s 20-9 loss to the University of Tennessee at Chattanooga Saturday, Oct. 19, there certainly wasn’t a whole lot between the two teams. Elon’s youth was defiantly magnified as the Phoenix struggled in big situations throughout the game.

The most glaring of Elon’s troubles was their red zone struggles. The Phoenix made three trips to the red zone and failed to get into the end zone once. The Elon offense has now failed to score a touchdown in their past six quarters of play.

The red zone troubles started in the first quarter against the Mocs as Elon had to settle for a field goal, which gave the Phoenix a 3-0 lead.

Swepson remains confident in the play calling, but did admit that he and the rest of the coaching staff may need to reevaluate the play selections in the red zone.

The one player who benefitted from the offensive struggles was freshman kicker John Gallagher.  The Caldwell, N.J. native had struggled through the first half of the 2013 season. The true freshman started out just 1 of 8 on field goals, but has not now converted his last five attempts.

“The confidence is definitely back,” Gallagher said.

The freshman was always backed by Swepson, calling his 3 for 3 game, “a positive note,”  and did not let the offensive struggles affect his kicking.

“They ask me to go out there and kick and I kick the ball, that’s what I do,” Gallagher said. “That’s all I can do.”

The rest of the offense was equally disappointed with their inefficient red zone trips. Junior wide receiver Kierre Brown caught seven passes for 74 yards including a 37-yard reception, but was unable to catch a touchdown pass.

“Being on offense it’s definitely frustrating not getting in the end zone,” he said. “It comes down to just an extra effort and that goes a long way.”

Junior quarterback Mike Quinn led the offense down the field throughout the game, but he and the rest of the offense were unable to reach the end zone throughout.

“We did a good job getting over the midfield line, but you got to capitalize in the red zone,” Quinn said.

Quinn said he believed the offense looked good against the Mocs, but pointed out that finishing off drives is what hurt them the most. On one occasion, Quinn threw incomplete to senior wide receiver Rasaun Rorie, which would have been a touchdown. The Phoenix offense was then unable to convert on third down and was forced to punt in plus territory.

Elon was forced to punt twice in opposition territory. Both times with the down and distance of 4th and short. Swepson’s conservative decisions to punt was due to his faith in freshman punter David Petroni and the situation in the game.

“I was playing the percentages that we were going to put the ball inside the 10,” Swepson said. “I didn’t want to give that offense a short field.”

The offense stood behind Swepson’s decision to punt, but the players were certainly frustrated about not converting on third downs and being unable to go for it on fourth down.

“It’s tough because I think we had some time left,” Quinn said. “But not a whole lot of time.”

While special teams did excel for the Phoenix, it did also prove costly on the other side of the ball.

To start the second half, Brown returned a kickoff near midfield. However, a holding penalty brought the ball back to a less favorable spot. The Mocs also pulled off a fake punt on the Phoenix which turned the game on its head. Junior fullback Taharin Tyson took the direct snap and rushed 24 yards to the Elon 42-yard line. The Mocs would go on to take a 7-3 lead — a lead they would not relinquish. Swepson described the call as “gutsy.”

The losses are not getting any easier for the Phoenix to take. With six losses on the year, there is little hope for anything other than moral victories.

“We have to just keep growing as a team,” Swepson said.