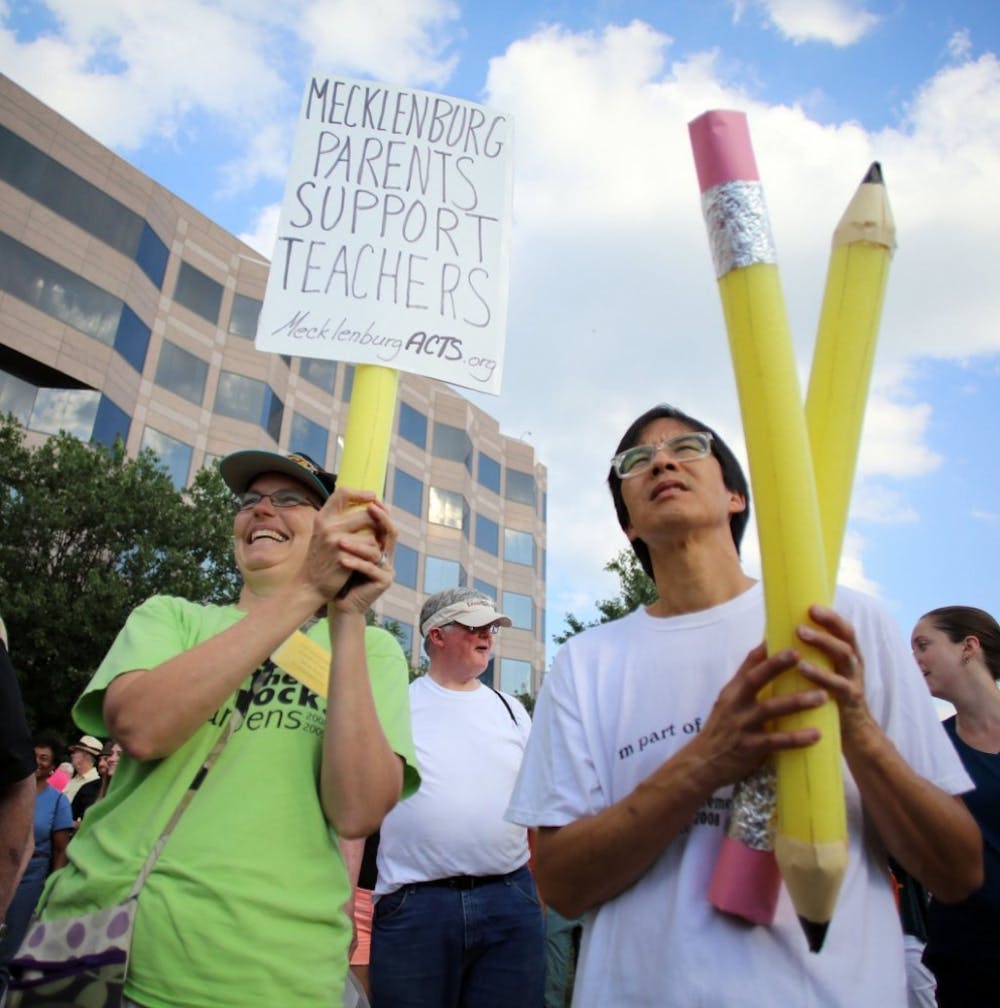 This December will be the last chance for North Carolina teachers pursuing master’s degrees to earn a pay increase for earning one. As a result of legislation passed in the North Carolina state budget in July, pay for teachers with advanced degrees next year will match their colleagues who have bachelor’s degrees.

A master’s degree or higher used to earn its owner a 10 percent yearly increase in pay. This year, teachers with two or less years of experience and a bachelor’s degree bring home $30,800 a year, according to the North Carolina Public School system.

“I’m concerned about the school system as a whole right now,” said Joe Ferrell, principal of Walter M. Williams High School in Burlington. “Why would teachers seeking master’s degrees come to North Carolina, where they’re now not rewarded for their work in furthering their own education?”

Led by Gov. Pat McCrory, the budget for the 2014 fiscal year removes upwards of half a billion dollars from an inflation adjusted high in pre-recession 2008, when North Carolina was among the nation’s leading states in educational funding.

[quote] Why would teachers seeking master’s degrees come to North Carolina, where they’re now not rewarded for their work in furthering their own education?" - Joe Ferrell, principal of Walter M. Williams High School [/quote]

The new budget, along with legislation passed last April, repeals current legislation that capped class size ratios at 21 for kindergarten through third grade classes throughout the school system. Grades 4-12 likewise no longer have limits on class sizes.

According to Angela Owusu Ansah, associate dean of Elon's school of education, the elimination of class caps will negatively affect student learning.

“[It will lead to] crowded classrooms, none or fewer teacher assistants, fewer teachers, no support personnel, little or reduced educational supplies,” Owusu Ansah said. “Teachers will be forced to work in worse conditions, and students will have less instructional support.”

Owusu-Ansah said she expects the slide to continue.

“We may slip lower,” she said. “The exodus to neighboring states is imminent.”

The decrease in average teacher salary means nothing good for students in the North Carolina public school system, but teachers will adapt, according to Owusu-Ansah.

“The high quality of education North Carolina boasted in the ‘80s will be inclined to reverse,” Owusu Ansah said. “But we have resilient teachers and they will heighten their resourcefulness and creativity.”

The Alamance-Burlington School System expects to be affected by the new legislation as soon as it goes into effect in 2014, according to Jenny Faulkner, public information officer for the school system.

“Like all school districts across the state, Alamance-Burlington Schools is very concerned about recent legislation eliminating the pay differential for our teaching professionals currently pursuing advanced degrees and for those who have plans to advance their educations,” Faulkner said.

Other professions in North Carolina still pay those with advanced degrees more money, Ferrell said, so why doesn’t the education profession do the same?

“You’ve got people who get a masters degree in business administration and we don’t cut those,” Ferrell said. “We’re talking about eliminating additional pay for teachers but we don’t talk about eliminating pay for others with advanced degrees.”

At Elon, the graduate program for a master’s degree in education has accelerated its program so those scheduled to graduate in July and August of 2014 will instead complete the master’s program by the end of Winter Term 2014, in time to receive the 10 percent supplement by April, according to Owusu-Ansah.

Originally, the N.C. legislature had said master’s degree candidates had to graduate by this December in order to qualify for the pay raise. But on Sept. 5, after public outcry, the legislature publicly changed the deadline to May 2014.

Tenure will also be eliminated for teachers who do not have it by 2013-14, as part of a long term goal to shift all teachers to one, two or four year contracts by 2018, effectively eliminating the tenure system.

Losing tenure itself may not be so bad for teachers, Ferrell said, but the foil is the timing, given all the other funding cuts to the public educational system. Even as an administrator, Ferrell does not have tenure.

“I’ve heard many teachers say that not having tenure will not necessarily impact those people who are working really hard for kids and doing things right and doing their jobs well,” Ferrell said. “I just think it’s really bad timing on top of the cutting off of master’s pay.”

Aspiring teachers who are now undergraduates may already be shying away from teaching in North Carolina because of the legislation.

“I think the information one learns in grad school is very valuable and helps produce better teachers,” said sophomore education major Tabitha Core. “However, a master’s is also expensive to get, and without higher salaries associated with the degree, I might have to avoid teaching in North Carolina altogether.”