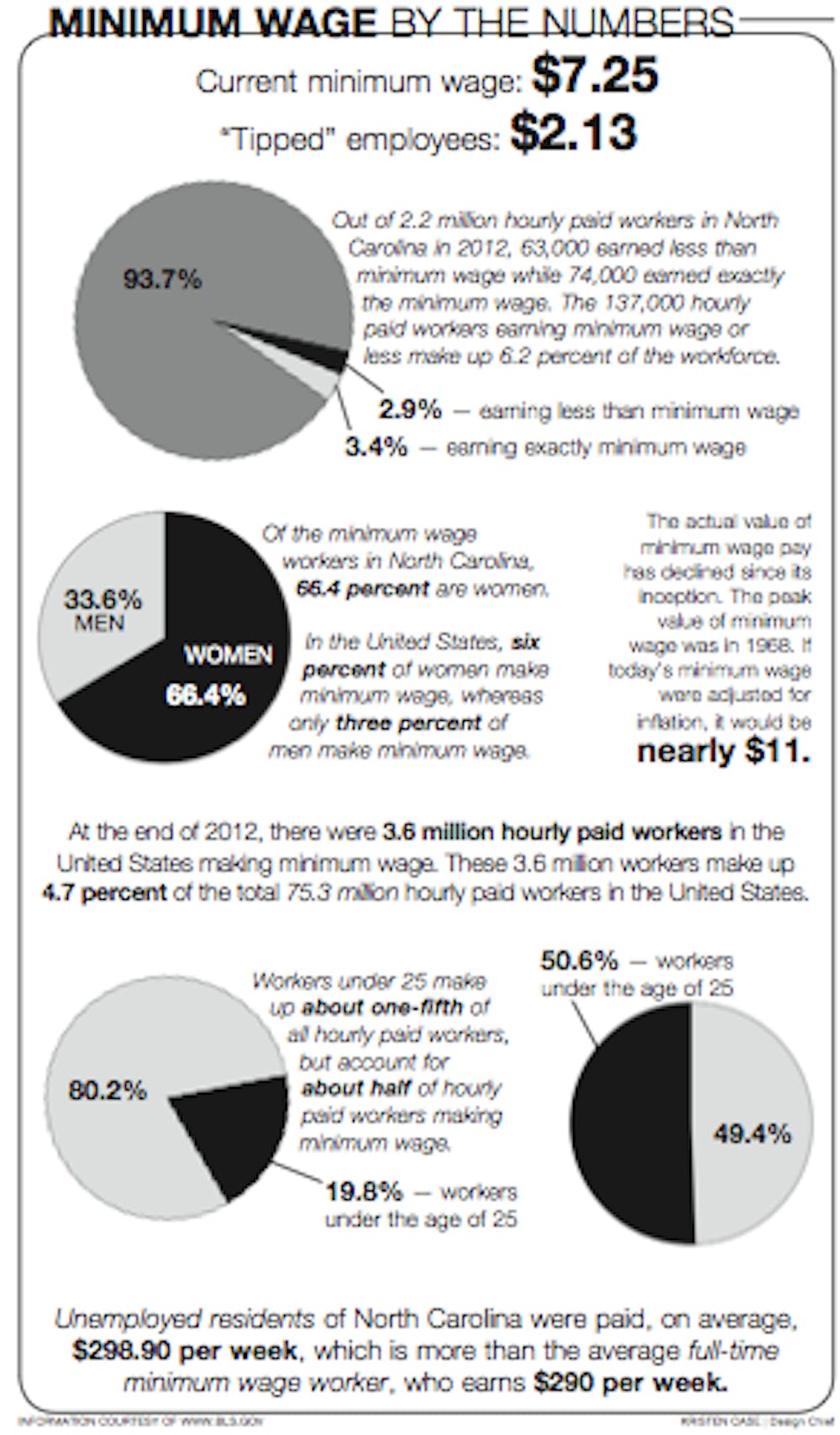 It’s no secret that the dollar has been losing value — but for minimum wage workers, this has especially dire consequences. Adjusted for inflation, minimum wage is now worth less than it was in the 1960s and ‘70s.

The minimum wage in 1968 was $1.60, which would be $10.69 today if wage had kept up with inflation, according to the Bureau of Labor Statistics’ Consumer Price Index inflation calculator.

According to Arindrajit Dube, assistant professor of economics at the University of Massachussetts Amherst, the purchasing power of minimum wage has fallen and minimum wage workers are currently earning 37 percent of what the median worker earns when it should be near 50 percent, he said.

Dube’s 2010 study on minimum wage and employment was cited during President Obama’s State of the Union address as the president called for a raise in the minimum wage. The study showed raising minimum wage would not result in unemployment. Prior to the recession, approximately 1.7 million workers earned minimum wage or below in 2007, but that total surged to 3.6 million in 2012. Low-wage jobs have expanded since the recession and have replaced middle-class jobs during the recovery. The District of Columbia and 18 states have raised minimum wage above the federal level of $7.25, and 10 states raise it annually so it rises with the cost of living. But workers who earn tips have a federal minimum wage of $2.13 an hour.

“An argument to raise the minimum wage stems from the fact that many people would argue that anyone working full-time shouldn’t be living so close to the poverty threshold,” said Steven Bednar, assistant professor of economics at Elon University. “One reason the minimum wage is not higher is because those affected by it cannot collectively demand more. Turnover is high in minimum wage, which decreases the collective bargaining power and certainly the bargaining power of any single worker.”

Bednar believes political pressure has much to do with the stagnation of minimum wage increases.

“One reason the minimum wage has not increased much is due to political pressure,” Bednar said. “There is an argument that increasing minimum wage would hurt businesses and job growth. Empirical evidence is not conclusive on this topic. Individuals making minimum wage are likely to spend a greater fraction of their income from companies that hire minimum wage workers, so this may hurt those who it intends to help.”

Paul Sonn, legal co-director of the National Employment Law Project, said the issue of raising minimum wage has become a political football that gets tossed around and ends up gridlocked in Washington, D.C. During the recession, one in five jobs lost were low-wage jobs, and three in five jobs created after the recession were low-wage jobs. The effect of continuing this trend is staggering, he said.

“The impact would be deepening poverty across the country and an overall weaker economy,” Sonn said. “If low wage workers don’t have the money to spend, businesses won’t have consumer spending that allows the business to make money.”

Workers under 25 make up approximately one-fifth of hourly paid workers but account for about half of all workers making minimum wage or less nationwide. In the first quarter of 2013, the average unemployment check in North Carolina paid $298.90 per week. Working a minimum wage job for 40 hours per week equates to an income of $290 per week — less than someone who is unemployed.

Since the minimum wage program started in 1938, its overall decline in real value is 20 percent since its all-time high in 1968. It declined in real value 34 percent from 1978 to 1989, and 19 percent from 1998 to 2006. Raising the minimum wage, Sonn said, helps stimulate the economy by increasing purchasing power and allowing workers to stay in steady employment instead of circulating through low wage employers, which costs each company thousands of dollars to train and hire new employees.

Dube said it would be best to phase in indexation policies over a number of years instead of all at once. It would take a couple of years of sharper increases to get minimum wage indexed to match the cost of living, and implementing these policies gradually would not result in unemployment, he said.

While minimum wage sits at one of its lowest points in history, profitability for U.S. companies is high.

“U.S. corporate profits have completely recovered and are at an all-time high,” Dube said. This inequality in profits exacerbates existing inequities in the wage earning system. “It’s a problem when policies tend to amplify certain problems they’re supposed to emolliate,” Dube said.