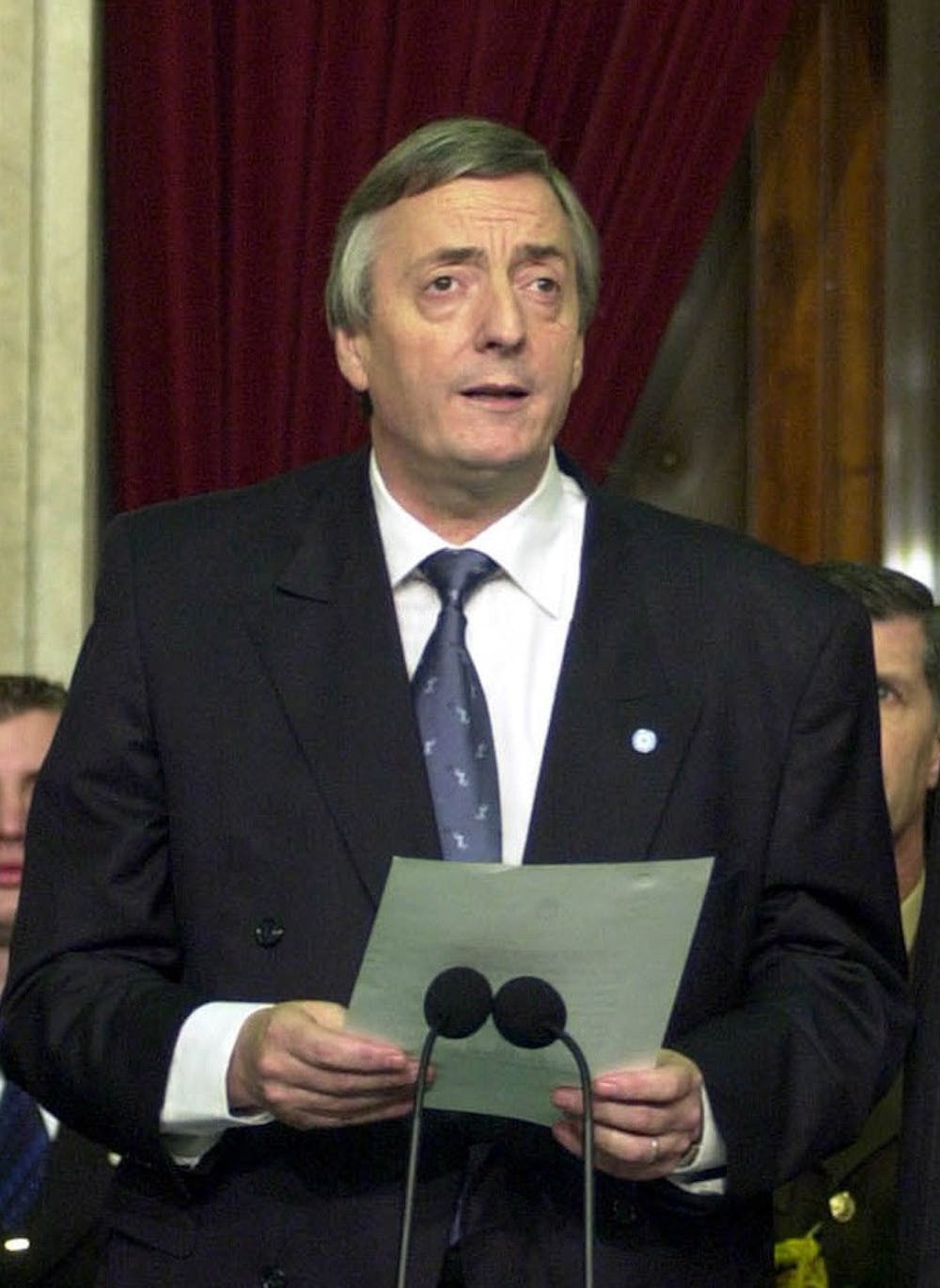 Argentina President Nestor Kirchner addresses the nation after his swearing-in ceremony at the Argentine congress on Sunday, May 25, 2003. Kirchner, 60, - the husband of current leader Cristina Fernandez- died suddenly Wednesday, October 27, 2010 after suffering from severe heart trouble, the presidency said. (Archivolatino/MCT)

In 1976, a military junta, or military run government, seized power in Argentina and for the next seven years carried out the National Reorganization Process, a period of state terrorism against left-wing guerrillas, political activists and anyone believed to be associated with socialism. The oppressive regime instilled fear among its people through extreme acts of violence, including kidnapping, torturing and murdering young people, the elderly and pregnant women.

The number of people killed or who simply disappeared during this time ranges anywhere from 10,000 to 30,000 civilians.

ESMA was the deadliest of the regime’s secret detention camps. The officers allegedly burned victims while others were drugged and thrown out of planes flying over the Atlantic Ocean.

An estimated 100 babies were born to detained mothers in ESMA. They were often given away to military families, which only added to the growing demographic of people with lost identities known as the “living disappeared.”

The Mothers of the Plaza de Mayo is an organization that constantly fought for justice against the past regime for the memory of their vanished children. When the women questioned the whereabouts of their children, the government could never offer a legitimate response with concrete answers. Today, many of these women tell their stories time and time again, yet are still pained by their tragic pasts.

Ilda I. de Micucci lost her two children, Victoria and Daniel, in 1977.

“We are fighting for justice, memory and an end to the violence,”  Micucci said. “It’s been many years, but it still brings me pain to tell my story, to talk about my children. But it’s important to our mission of their memory.”

Legal action against the crimes committed and officials associated with the military dictatorship began in 1983 once democracy was restored. President Raul Alfonsin brought an end to the trials in 1986, arguing the country needed to look toward the future rather than dwell on the past.

Eight years ago, then-President Nestor Kirchner reopened the cases, overturning the existing amnesty laws. In October 2011, the biggest trial against the military dictatorship occurred, sentencing 19 military officials from ESMA for crimes against humanity. There are 70 more accused of crimes committed at the ESMA trial against 900 victims.

The trials occur under the titles ESMA I, II, III and so forth. They will include more than 800 testimonies of witnesses, including family members of the disappeared as well as survivors. The trials are expected to last up to 24 months.

William Janover, an international student from Brown University, attended a hearing this past week with two male witnesses who were detained in the ESMA at ages 11 and 14.

“It was strange to hear how calmly and bluntly the witnesses were able to describe the horrible things that happened to them and their family,”  Janover said. “When I spoke to my host parents about the hearings, they said they had heard of them but had no plans to go. They brought back too many bad memories.”

During the National Reorganization Process, military officers created a frightening atmosphere that kept Argentines quiet during the disappearances. Following the fall of the junta, many Argentines sought answers from the government in order to learn the truth about los desaparecidos — the disappeared.

On Sept. 5, a woman offered her testimony regarding the disappearances of her two older sisters. She was only 14 years old when her eldest sister, Claudia, was taken Oct. 4, 1978. Her sister, Andrea, was three months pregnant when she was kidnapped outside the front door of her home. Despite neighborhood witnesses when the disappearances occurred, it proved difficult for people to recall what they may or may not have seen.

Clara Franchini is the student coordinator at the CIEE Buenos Aires Study Center.  She explained the ESMA trials are about restoring justice for both the victims and their surviving families.

“The trials for the memory, justice and truth are the beginning of a long road that seeks to recover the social ties the dictatorship wanted to destroy,” Franchini said. “The recovery of memory, learning about our history and realizing the process of social reorganization attempted on the entire society are just the start to recover social solidarity, empathy and political participation.”