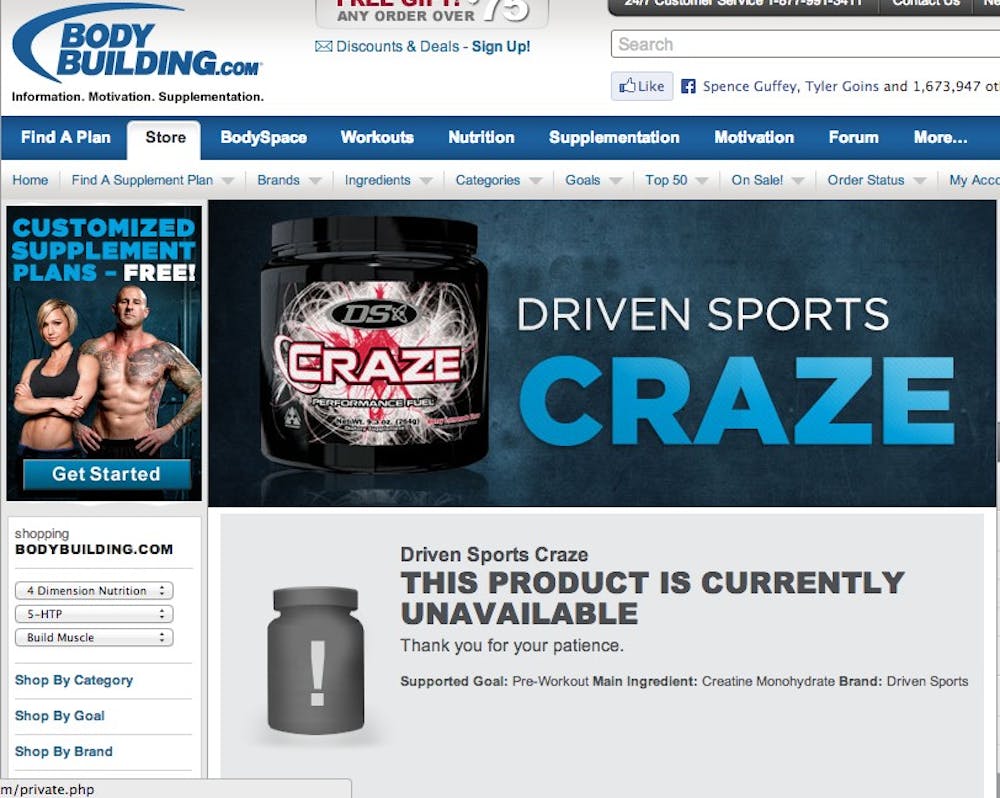 A screenshot of Bodybuilding.com shows that Craze is no longer for sale on the site following recent controversy. Photo by Ethan Smith.

Put down the pre-workout — that is, if you’re using Craze.

Will Steele, a sophomore at Elon University who has been working out since seventh grade, accidentally took triple the recommended dosage the first time he took pre-workout.

“I felt as though I could walk through a brick wall, throw a car across a state with my bare hands and still have plenty of energy to run a marathon,” Steele said. “My heart was racing and I felt zero fatigue.”

Bodybuilding.com, an online supplement retailer, has pulled Craze from the site after the product’s manufacturer asked the site to remove the product. A representative for the site said the company provided no specific reason for the removal request. While this concerned some college weightlifters, others remained undeterred.

“The term ‘illegal substances’ means nothing to me,” said senior Dallas Reynolds. “I am a believer that I choose what I ingest and not the government. If something became illegal, I would absolutely still take it. I already do with Jack3d.”

Pre-workouts are categorized as dietary supplements and aren’t regulated by the Food and Drug Administration under the Dietary Supplement Health and Education Act of 1994, leaving the product manufacturers to regulate supplements.

Craze is not the first pre-workout to come under fire. Jack3d, a now banned pre-workout, was pulled from the shelves after the FDA received 86 reports of illnesses and death related to DMAA — the main stimulant in Jack3d.

“If there are not many cases [of adverse side effects], I would likely continue using assuming it won’t happen to me,” Reynolds said. “Unfortunately, the things that work best are often the worst for you.”

Reynolds said he disregards most of what’s on supplement labels, often reading the label once before he buys a product and never again. He said he has exceeded the recommended dosage on product labels many times after building up a tolerance to the stimulants in pre-workouts.

He stopped using pre-workout at the beginning of the summer after experiencing chest pains, temporarily replacing it with a homemade concoction of “Hyphy Mud,” a combination of soda and instant coffee popularized by Kali Muscle of  YouTube stardom. But he has since switched back to using pre-workout — continuing to take Craze, despite the controversy surrounding the product, along with leftover bottles of Jack3d he bought before the product was banned.

Steele said he proceeds with caution when exceeding the recommended dosage of a pre-workout.

“With C4 (a pre-workout), I built up a tolerance to the product within the first two weeks of it,” Steele said. “So I exceeded the dosage by a fraction of a scoop and monitored its effects to see if I should proceed with the slightly upped dosage or go back to the fractionally smaller recommended dosage. If a supplement reports adverse side effects like dizziness or increased heart rate, then I would absolutely discontinue using the product. ”

Tim Pruitt, a sales associate at General Nutrition Center, said it’s important to research what’s in a product before using it, and that he will reread the label several times after purchasing the product.

“Before I decide to try something new I’ll write down the active ingredients and find as much information as possible on using each ingredient,” Pruitt said.

But even Pruitt has tried some diabolical concoctions.

“Worst and craziest thing I’ve done was one scoop of Dr. Jekyll, Mr. Hyde, Pump-HD and MRI Black Powder,” Pruitt said — a total of 919 milligrams of caffeine, or nine cups of coffee.