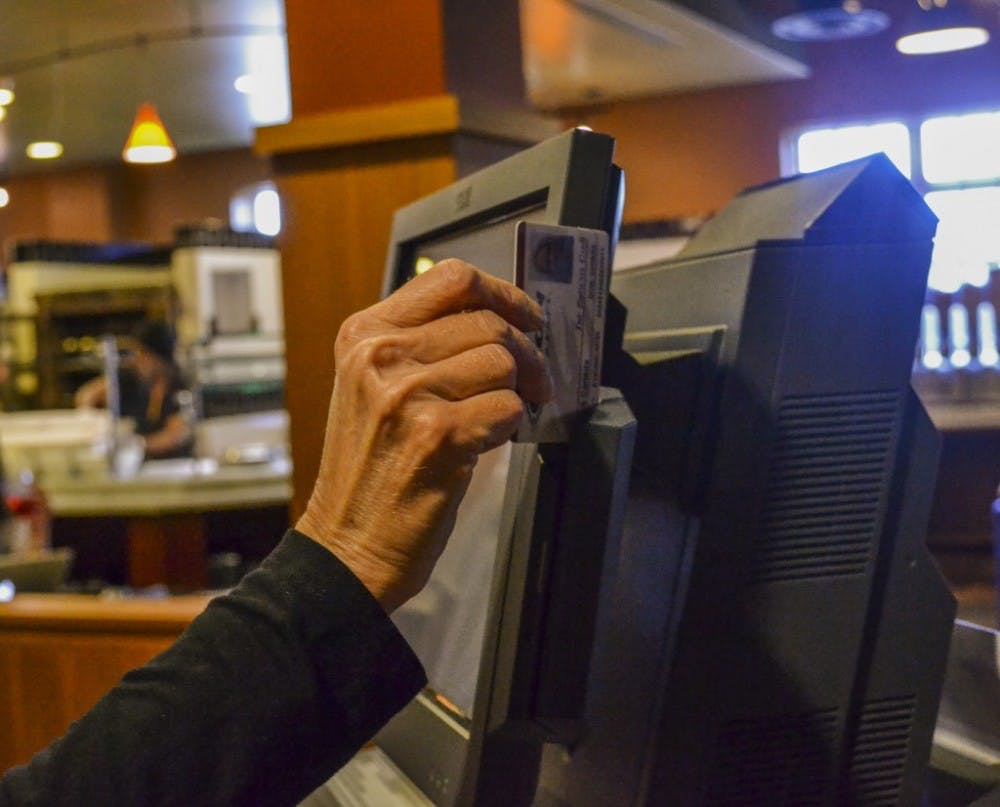 The tax overhaul legislation passed at the end of July requires Elon and other North Carolina universities to levy a tax on meal purchases. The meal plan system is complex, and it is unclear how this tax will be levied. Photo by Katy Canada.

Though Elon University and other nonprofits effectively retained their sales and property tax exemptions following North Carolina’s tax code overhaul, some institutions must now determine how to levy sales taxes on food and event tickets.

Beginning Jan. 1, 2014, universities must collect tax on sales of student meals and tickets to events such as sporting games or theater performances. The sales tax rate in North Carolina is 4.75 percent, and local rates vary by county. Alamance County levies an additional 2 percent sales tax on purchases, raising the total rate to 6.75 percent.

It is unclear how the new sales taxes will be applied and collected, for a number of factors may complicate the tax collection process, especially for universities. Gerald Whittington, vice president for business, finance and technology at Elon, said university officials are grappling with several complex questions: Should they tax meal purchases individually, or simply collect sales tax on an entire meal plan? How do meal dollars factor into the equation? If the university sells season passes for basketball games, for example, should it collect taxes on tickets to games played before Jan. 1?

Whittington will join representatives from other universities and nonprofits Aug. 29 to discuss the new taxes with the N.C. Department of Revenue.

“It’s clear no one understands how to apply this,” Whittington said. “Most of us would argue that there shouldn’t be some arcane collection system that would cost a lot to develop. We need to figure out how to apply these taxes in an easy way.”

Elon’s meal plans cost between $2,500-$6,274, and freshmen and sophomores are required to purchase them. Sophomore Chris Battaglia said he might not purchase a meal plan next year if the plans are taxed in their entirety.

“If you purchase the least expensive plan for about $2,000, that $140 tax could buy you a lot of groceries at Wal-Mart,” he said. “It seems like it could be more useful not to have one.”

Though the new tax requirements could potentially frustrate students and event-goers, the restructuring isn’t as impactful as some initially expected. It came to light late last year that certain reform proposals would prevent many nonprofit institutions from receiving refunds on sales and property taxes, a change that would cost private universities millions of dollars. Elon receives about $3.5 million in refunds annually, Whittington said, and Elon and other private universities in the state raised their tuition rates at the end of spring to offset the potential loss of refunds.

But representatives from universities, churches and other nonprofits lobbied against the proposed changes regarding sales and property taxes. Legislators left property tax refunds unchanged and ultimately decided to cap sales tax refunds at $45 million annually per institution, an amount generally exceeded only by nonprofit hospitals. On average, Elon receives $1.75 million in sales tax refunds each year.

“The problem is that if you have a cap, it could be lowered,” Whittington said. “It’s not over. It is in the immediate, but we have to stay vigilant and point out what this means going forward.”