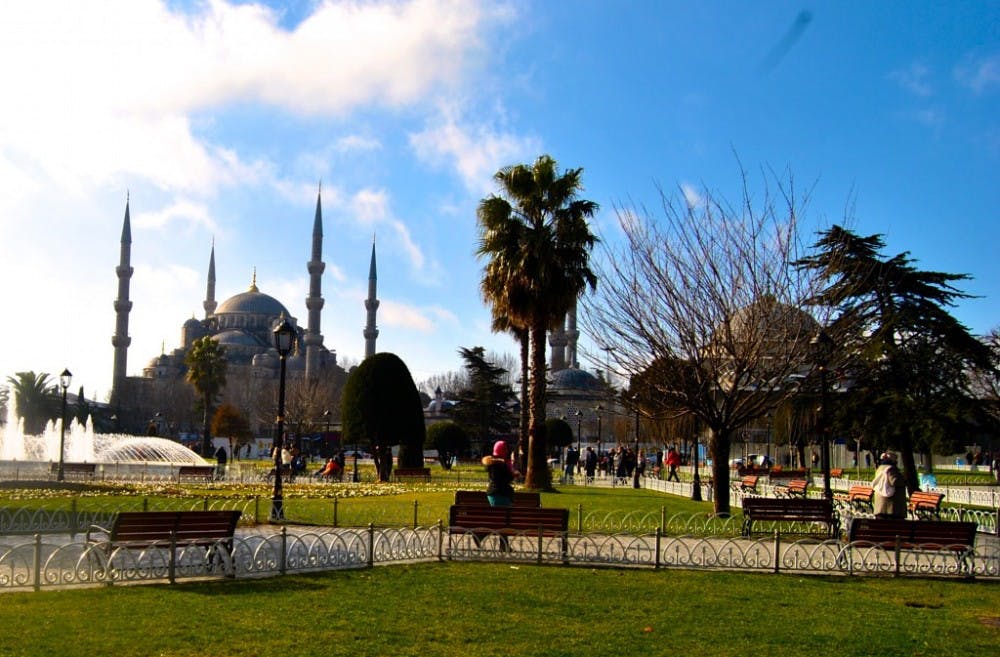 A leisurely park in Istanbul overlooks the Blue Mosque, a historic site where Turkish sultans once lived.

ISTANBUL — Despite major education initiatives and social reformations since the time of Ataturk, many girls in Turkey still do not receive an education.

Mustafa Kemal, now better known as Ataturk, or “Father of Turks,” is credited with founding the modern Republic of Turkey and was the first president of Turkey. Ataturk’s many social, political and economic reforms were embedded in the six fundamental principles of what is now known as “Kemalism.”

These six principles include Republicanism, Nationalism, Populism, Statism, Secularism and Revolution. The latter two were vital in the emerging role education has played in Turkey throughout the past decades.

“Kemalism was one of the main reasons that education and literacy increased and spread around girls and boys ‘equally’ after the establishment of the Republic,” said Nesrin Ersoy McMeekin, an instructor at Koc University, a private university in Istanbul.

“Still, it was and is a slow process, but since man and woman are considered equal by law, it became the government’s duty to provide equal education for both sexes,” McMeekin said.

“Principles of Kemalism were very strongly — and unfortunately sometimes wrongly — used in education in different periods of the Republican era. Right now there is a big battle of keeping some of them and/or destroying them.”

As a professor of higher education, as well as someone who grew up in the Turkish education system, McMeekin has experienced challenges due to lack of funding for public education in Turkey, much like the monetary problems faced in the United States. She also sees how familial relations play a major role in the education of both young girls and boys, whether positively or negatively.

Although primary school is mandatory just as it is in the United States, many children, particularly girls, are not enrolled due to “traditional values” sought by parents, according to the United Nations Girls’ Education Initiative (UNGEI). This problem occurs primarily in the eastern parts of the country, which are considerably more rural and conservative.

Tolga Tan is a second-year Koc student who grew up in Kadikoy, Istanbul and is passionate about his own education. Tan has seen the impact families seem to have in various parts of the country.

“In rural areas, getting some sort of education has traditionally been a challenge,” Tan said. “Most people in the eastern part of Turkey usually complete only primary education. The gender role in rural parts is more pronounced than it is in urban parts. Many girls don’t receive any education although it is unconstitutional, and this is mainly due to the parents and what they call ‘traditional.’”

According to the UNGEI and the United States Embassy in Turkey, the main obstacles to school attendance for girls in Turkey include a lack of school facilities, gender discrimination, low expectations from education, low quality of education and the cost associated with families sending their children to school.

[quote]Many children, particularly girls, are not enrolled due to 'traditional values'”[/quote]

UNGEI exemplifies the problem by outlining Van, a small town in eastern Turkey that demonstrates how poverty and cultural traditions have historically kept girls at home. Many families are worried an education could “spoil their daughters for marriage,” according to the report. But through the efforts of the UNGEI, more and more of these families have altered their opinions in order to change their family’s educational legacy.

“It is true that if the parents have higher education it is more likely that their kids will have one as well,” McMeekin said. “But there is also a significant number of parents who would do everything to have their kids go to university just because they themselves didn’t have the chance.”

Both Tan and McMeekin believe the amount of money pumped into education from the government could be increased, which might financially encourage families to make more of an effort in regards to their children’s education.

According to the United States Embassy in Turkey and the UNGEI, part of the problem lies in the cost of transporting a child to school and buying supplies. This could be solved with the creation of scholarships to improve attendance rates in public primary, secondary and higher education in the eastern parts of Turkey.

Public universities in Turkey generally cost about 400 Turkish Lira per semester, which is equal to about $222.60 in the United States, or they are free of charge. But students must go to primary school and follow the system in order to eventually take the university entrance exam during their final year of high school. At this point, there are a number of scholarships given if needed, McMeekin said.

But the campaign “Hey Girls, Let’s Go to School” has seen challenges that inhibit some children from eventually reaching these upper levels of education. Although the UNGEI has seen persistent poverty and a lack of resources in rural Turkish areas that continue to harm the potential of the nation’s education system, it has also seen increased media visibility and support from prominent politicians including the Prime Minister and the first lady of Turkey since its 2003 inception.

“In the last 15 to 20 years, emphasis on education and campaigns to support girls and kids from rural areas in getting education have increased significantly,” McMeekin said. “But is it enough? Not yet. There is still a huge prejudice against girls’ education in Turkey, especially in eastern Turkey.”