Cuba emerges as a sustainable leader with development of organic farms 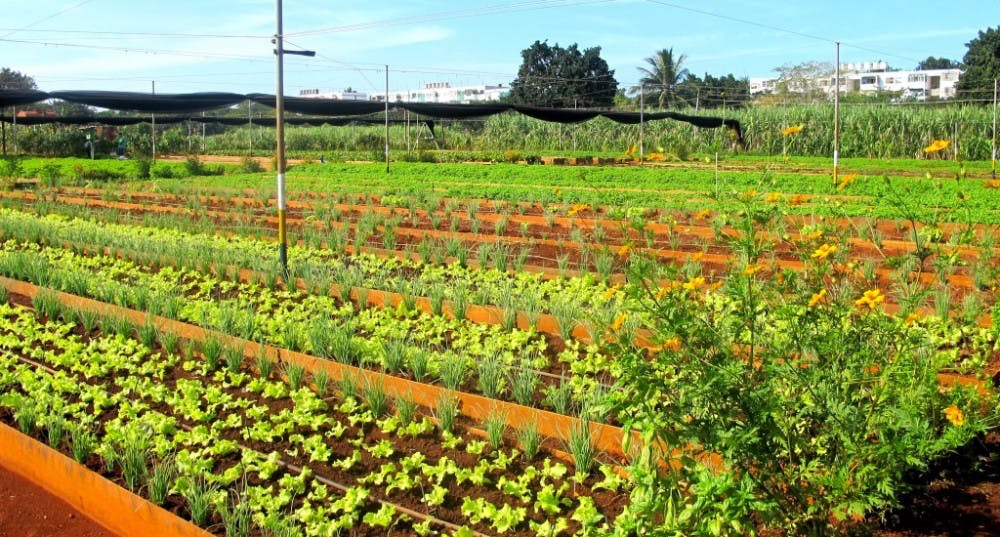 Lettuce is one of the largest cash crops at Vivero Alamar, an organic farm on the outskirts of Havana.

HAVANA – Vivero Alamar hums with productivity. Bordered by greens so vibrant and striking, it’s hard to believe they aren’t spray-painted. The majority of these greens are mounds and mounds of lettuce, the organopónico’s cash crop. The farm is located in a suburb outside of Havana and sells about 400 batches a day at its market. Many customers visit on a daily basis.

Cuba’s food culture was never one to focus on vegetables. Yet in the last twenty years, as organopónicos – organic urban farms – have sprouted up and the price of meat has skyrocketed, Cubans have been turning to new food sources.

“There’s a saying that 25 percent of the food we eat is to live and the other 75 percent is for doctors to cure diseases that food produces,” said Miguel Salcines, the president and founder of Vivero Alamar.

Like many Western countries, Cubans were dependent on industrial agriculture and ate a diet heavy in meat, fat and sugar.  This lifestyle was “producing an epidemic of cancer and cardiovascular disease,” Salcines said.

Created in 1993 as a result of government policies responding to a severe food crisis, Cuba is now among the top countries in sustainable development. After the Soviet Union dissolved, Cuba lost its main provider for nearly everything – imports, food, crops, fertilizer and oil. The country spiraled into what became known as “The Special Period.” The timing was special because Cubans were on lockdown because of starvation. The government began to reorder its agricultural industry, and anyone with an interest in farming could get land.

Sustaining these small farms was the difficult part. Those with an agricultural background had been trained in only industrial methods, so farmers recruited old-timers with knowledge in traditional farming. When Cuba didn’t have the supplies or the money to get new tools, they got thrifty.

Like many other organopónicos, Vivero Alamar became organic by default. With no chemical fertilizers, they had to create their own using biopesticides like neem tree seeds, earthworms and manure harvested from animals raised in Cuba.

Nearly everything is part of a cycle, from the animals to the herbs that grow in the raised beds littering the farm’s 25-acre property. The farm uses oxen to transport feed to the animals, banana peels as biodegradable bags filled with seeds to provide nutrients to plants and water purified by magnets. 90 percent of their plants start out in greenhouses, which saves space and time.

With only two machines, the farm’s 180 employees do most of the work. In keeping with the changing culture and spirit of necessity, Vivero Alamar strove to hire women and the elderly, two populations that had previously not been welcomed in farming. The farm is a co-op with members who have a stake in its development and receive higher wages than the average Cuban.

Cubans still live under the ration system  where they get a certain amount of rice, oil and other foodstuffs per person. But it is not enough. Many Cubans work two jobs because fixed state salaries cannot sustain a living. The best jobs are those that involve foreigners, often in the service sector.

It is Vivero Alamar’s employee-focused policies and commitment to growing food sustainably that bind it to the community. Thriving organopónicos are changing the way Cubans live and their attitude toward work, farming and food.  They have introduced unfamiliar produce like broccoli and cauliflower, stocked an ever-replenished supply of fresh produce, herbs and spices and provided a new style of management.

It’s possible that once the regime falls, Cuba will be a vacuum for capitalism and modernity. In many ways Cubans are clamoring for it, and with the right infrastructure and support, the country could be a thriving new market. But the organopónicos and the ethos behind them are here to stay. Cuba is rightfully proud of its sustainable efforts and its revolution in farming, turning a nation from the brink of starvation into one that can feed itself organically, sustainably and nutritiously.

When asked if Cuban agriculture would go back to industrial production if the means were available, Isis Salcines, the outreach director of Vivero Alamar, shook her head as if she was confused by the question.

“I think now people have another mentality,” she said.

Stephanie Schwartz, a former journalist, is part of the interactive media master’s program and was a member of the Cuba fly-in group. The project she worked on can be viewed at farmcuba.org. She can be reached at sschwartz6@elon.edu.