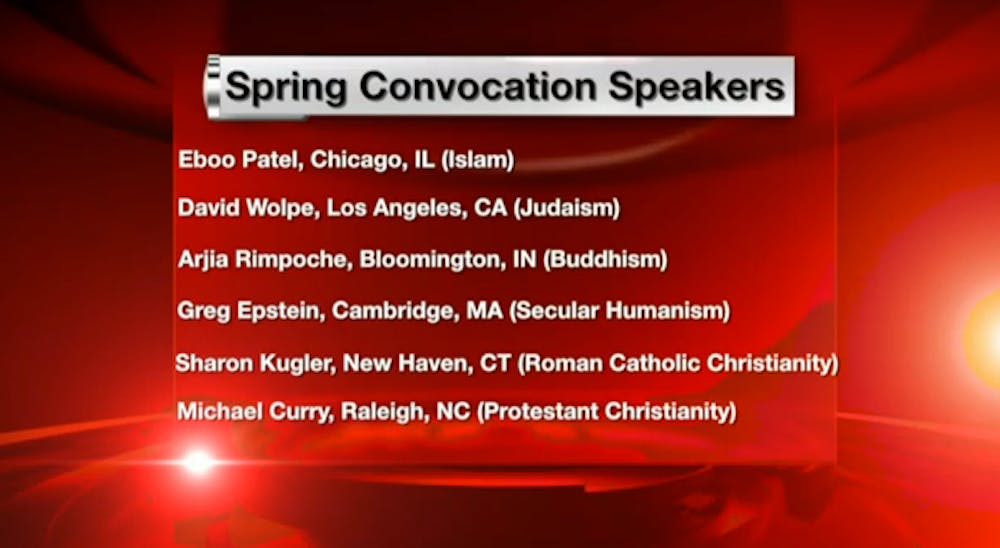 Elon Local News has learned that along with founder and Executive Director of Interfaith Youth Core Eboo Patel, several other notable religious and spiritual figures will be attending the Convocation for Honors on April 30.

Along with starting the interfaith movement in Chicago, Eboo Patel also wrote the book, Acts of Faith: The Story of an American Muslim. Patel was a member of President Obama's Advisory Council of the White House Office of Faith Based and Neighborhood Partnerships from 2009 to 2010.

David Wolpe is the Rabbi of Sinai Temple in Los Angeles, California. Wolpe has been featured on several television news programs including the TODAY show and Face the Nation. In 2012, Newsweek listed Wolpe as the most influential Rabbi in America.

Arjia Rimpoche is one of the most prominent Buddhist leaders in the United States. In 2005, the Dalai Lama selected Arjia Rimpoche to be the Director of the Tibetan Cultural Center in Bloomington, Indiana.

Greg Epstein has been the Humanist Chaplain at Harvard University since 2005. Epstein has a Bachelors of Arts degree in Religion and Chinese, a Masters of Arts degree in Judaic Studies both from the University of Michigan, Ann Arbor and a Masters of Theological Studies from the Harvard Divinity School. He is a New York Times bestselling author of the book, Good Without God: What a Billion Nonreligious People Do Believe.

These additional speakers will be present in honor of the Numen Lumen Pavilion.