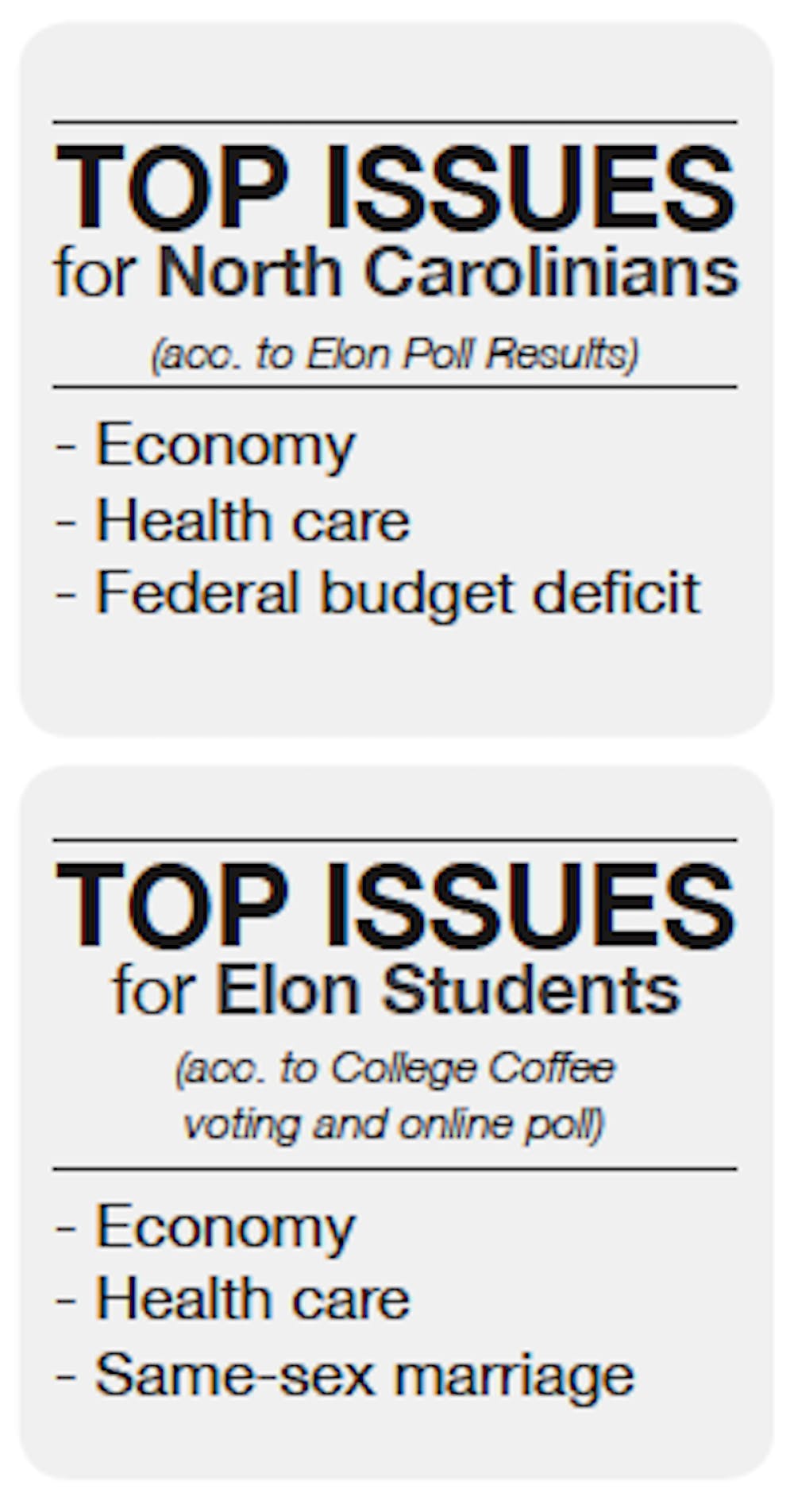 With Election Day approaching, the Elon University’s campus is getting into the swing of debate season, most notably with a student debate scheduled for Oct. 25. Prior to the debate, students indicated the topics most important to them during this campaign season.

Of the 600 students who voted, the majority ranked the economy, health care and same-sex marriage as the three most important topics to address at the debate.

The debate committee and Jana Lynn Patterson, assistant vice president for Student Life, reached out to the Elon community to select the three topics of the student debate. Voting for the topics occurred during College Coffee on Sept. 18 and online.

Senior Jess-Mara Jordan did not vote, but said student loans would be her biggest topic of interest.

“I feel like all the other stuff that’s on the bigger platforms don’t really apply to us,” she said, referring to health care and the economy, two major issues on which both Republican Mitt Romney and Democrat Barack Obama are basing their campaigns.

Patterson said loans were the fourth most popular topic. She explained that students are probably concerned about health care and the economy because they’re such hot topics in the actual Democratic and Republican Party platforms. She attributed the popularity of the same sex marriage topic to the current controversy surrounding Chick-l-A’s presence on campus.

Despite the popular support for discussions concerning the issue, senior Avery McGaha said same-sex marriage is not something people should really argue about, because he believes it should not be restricted by the government.

“For me, at least, there should be no debate,” he said.

McGaha participated in the voting. He said the topic that concerns him the most is the environment, but that it does not make for an engaging debate topic.

Earlier last week, an email was sent out to the student body searching for applicants to participate in the four-person debate teams.

“We want everyone to participate,” Patterson said.

She said the ideal makeup of the teams will be two students, one faculty member and one staff member. Additionally, political organizations and action groups will be permitted to have tables to engage students who attend the debates, which will also be televised by Elon Local News, air on WSOE and covered live by e Pendulum.

Patteron said political engagement on Elon’s campus is high relative to that of other schools and that she hopes the debate includes civil discourse about the three student-selected topics, which, she said, are clearly of importance to the campus community.

“The goal is to really get the university engaged,” Patterson said.

The last time the school held a debate of this magnitude was in 2004.