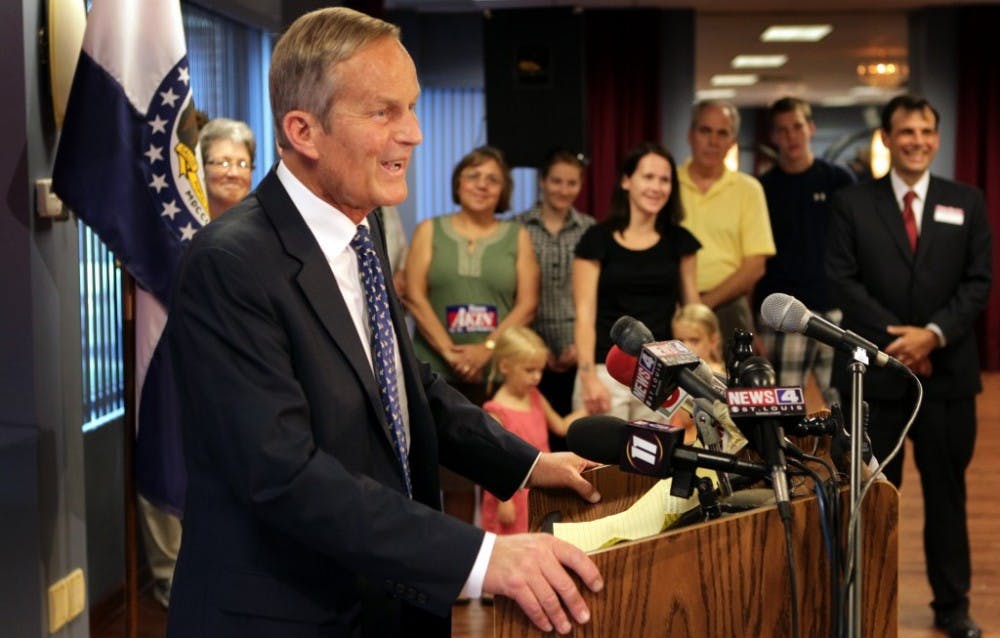 U.S. Rep. Todd Akin (R-MO) speaks at a news conference in Chesterfield, Missouri, where he announced his plans to stay in the race for the U.S. Senate, Friday, August 24, 2012. (Robert Cohen/St. Louis Post-Dispatch/MCT)

Four years ago, I don’t know that anyone could have predicted that women’s reproductive health would be one of the most hotly-debated topics heading into the pinnacle of the presidential election season. The economy, sure, but a reignited social divide on issues of rape and abortion? But that’s where we are, forced to confront the ugly reality that many people in America, including many women, don’t see women’s bodies as their own.

This particular point has been shoved to the forefront of people’s minds in the last few weeks as numerous political candidates in the Republican Party made comments about women that were both insensitive and simply ignorant.

The most talked about instance was Missouri Rep. Todd Akin, who said the following during an interview: “It seems to me, first of all, from what I understand from doctors that’s really rare. If it’s a legitimate rape, the female body has ways to try to shut that whole thing down.”

Let’s begin by just considering the complete lack of factual basis these statements have. The Center s for Disease Control and Prevention recently reported around 32,000 women conceive as a result of rape every year, or five percent of all rape victims. So, according to Akin, those 32,000 women weren’t “legitimately” raped.

Either that, or women's bodies have these supposed ways of shutting that down. What does that mean anyway? Sperm killing secretion? A magical ovary that sucks the egg waiting to be fertilized back out of the fallopian tube? Anyone who took a basic anatomy course could tell you that Akin's remarks are ludicrous.

For women, the minute, and I mean the minute, we start adding words to the concept of rape like “legitimate” or “forcible,” we imply that rape can be viewed as "legitimate” or “non-forcible.” We take away from the power that rape has and the atrocity that it is and we make it something small and something to be embarrassed about. This is simply not acceptable.

I wonder what Smith’s daughter felt when she heard that, for her father, her baby’s appearance in the world might as well have come from an attacker as it did a consensual sexual act.

Maybe it’s a generational thing. Maybe it can be argued that men like Smith and Akin grew up in an age where sex was still a taboo subject and rape wasn’t something that was ever discussed.

But as a woman of the next generation, the one that’s supposedly inheriting the world, I hope from the bottom of my heart that the young men that share this campus and this planet with me know better than Akin and Smith.

I hope they have an awareness of how the female reproductive system works, what a pregnancy means for a woman of any age in any situation and how, if men don’t step up and fight for them, it will be a losing battle, because 50 percent of the audience is lost. We all need to be on the same side and recognize that rape is rape and it can’t be compared to anything else and certainly can’t be hijacked to make a point that getting pregnant is somehow a woman’s fault, because she certainly didn’t do it alone.

So educate yourselves, young men of today. And young women: Don’t let men get away with ignorance.

Gone are the days where we can’t talk about these issues, and the more we can get them out there, the better off our entire society can be.