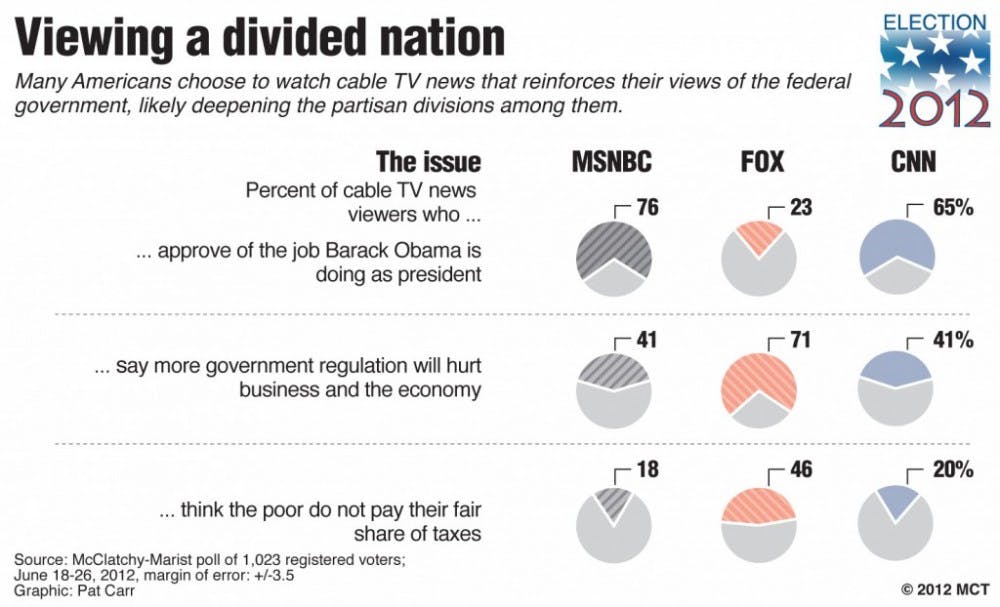 Charts showing percent of cable TV news viewers who approve of President Barack Obama, say regulation hurts business and think the poor do not pay their fair share of taxes, according to the news network they watch; results from a new McClatchy-Marist poll. MCT 2012

On Tues., Nov. 6, Americans will take to the polls to decide if President Barack Obama, the Democratic incumbent, will get to keep his spot in the White House or if another candidate will unseat him. Former Massachusetts Governor Mitt Romney is the presumptive candidate for the Republican Party, although this won’t be official until the Republican National Convention in Tampa Bay, Fla. at the end of August. Even Obama isn’t officially the candidate until the Democratic Party confirms him at their convention in Charlotte during the first week of September.

But as apparent candidates, both Obama and Romney have been busy on the campaign trail, with private fundraisers, rallies and appearances taking up a good deal of their time. As of July 24, Obama and Romney were nearly neck and neck in a Gallup poll, with 46 and 45 percent of the vote, respectively.

Obama will most likely be running with current vice-president, Joe Biden, while Romney has yet to announce his vice-presidential candidate. Political pundits have suggested names as diverse as former Secretary of State Condoleezza Rice to Tim Pawlenty, former Minnesota Governor and former GOP presidential candidate. No date for has been set for the announcement of Romney’s running mate and in 2008, then-candidate John McCain (R-Ariz.) didn’t announce he would be running with Sarah Palin, the former governor of Alaska, until just two days before the convention convened.

As the incumbent, Obama is facing a 46.8 percent approval rating (Gallup, week of July 16-22), an 8.2 percent unemployment rate (U.S. Bureau of Labor Statistics, May 2012) and dissatisfaction among many for failing to obtain rapid economic growth promised during his 2008 campaign. Obama is also facing dissent in Congress over his health care plan, the budget deficit and other issues. The most dramatic step Obama has made in the last few months is announcing his support of same-sex marriage.

Mitt Romney is a businessman and served as governor of Massachusetts from 2002 until 2006. He also ran for president in 2008 but lost in the primary race to McCain. Romney’s platform isn’t entirely clear and he has yet to take a clear stand on immigration or foreign policy, but he is against Obama’s health care law, a curiosity, since it is modeled off Romney’s very similar health care law passed during his time as governor. Romney has very recently come under fire for his financial status. There is some discrepancy about when he left his former position at the company Bain Capital and he so far has refused to disclose more than the last two years of his tax returns.

This fall, after both Romney and Obama are confirmed as candidates in their respective parties, there will be presidential debates. The first is set for Oct. 3. Both Obama and Romney have had strong debate performances in the past although they’ve never faced each other. Currently, the New York Times reports Obama is carrying 217 of the necessary 270 electoral votes, Romney has 206 and 115 are “toss-ups,” meaning they could go either way. North Carolina finds itself in the “toss-up” category, but is leaning more towards Romney.

[box] Throughout the fall, stay with The Pendulum for updated information on elections at all levels, in-depth profiles of candidates and the most up-to-date polling information. In the meantime, if you’re not already registered to vote and you call North Carolina your permanent home, visit http://www.ncsbe.gov to register to vote or visit your home state’s board of elections website to learn how to register. If you are registered to vote where you’re from and need to fill out an absentee ballot, make sure to check your board of elections website for information about how to obtain the proper documents. [/box]