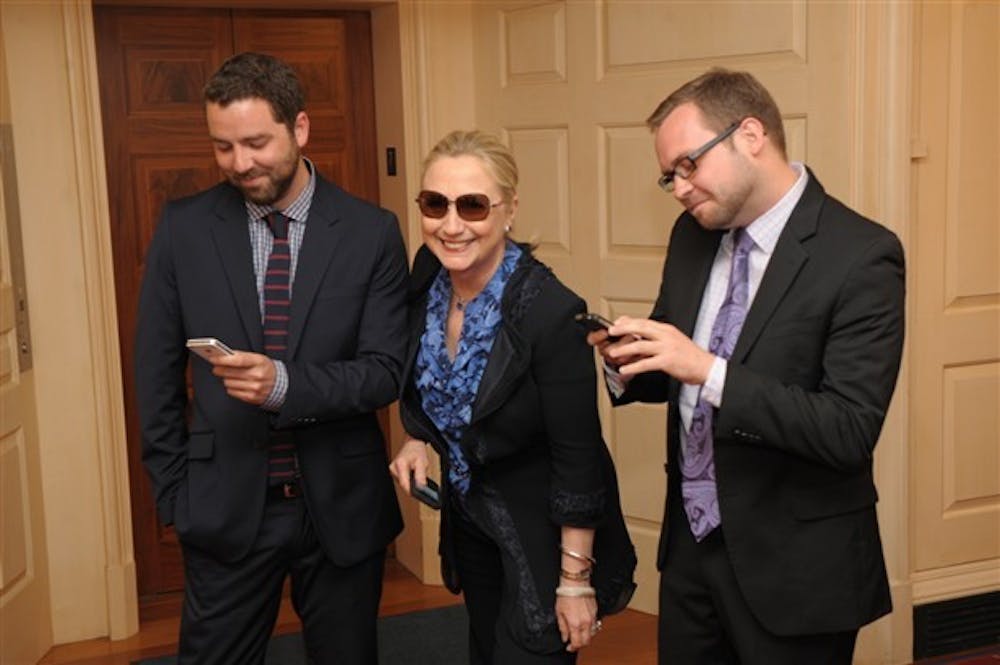 After a long day at Public Campaign, the Washington non-profit organization where the Elon University alumnus works, Smith met up with his friend Stacy Lambe at Nellie’s Sports Bar.

In addition to typical bar fodder, Hillary Clinton somehow became a topic of conversation. Specifically on Smith’s mind was a black and white photo of the Secretary of State wearing a stern image while texting meticulously on her cell phone. The two thought some serious humor could be made from that and before the night was over, the groundwork was put in for the Tumblr site TextsfromHillaryClinton.

The first image posted on the site was an image divided into two, with Clinton on the bottom and President Barack Obama on top. The commander-in-chief is pictured asking, via text, what the secretary was doing. Clinton’s response: Running the world.

Smith and Lambe, two minds in tune with politics, watched the news and then went online to find material.

“We would just go to Google images and search the names of people we thought would have pictures of cell phones or were in the news,” Smith said.

The popularity of political humor, in addition to Smith’s social media prowess, helped Texts from Hillary go viral. In its week of operation, the site’s 32 posts generated 83,000 likes on Facebook, 8,400 Twitter followers and more than 45,000 Tumblr subscribers.

The contagiousness of the site wasn’t a surprise to Brook Barnett, Smith’s favorite professor while at Elon.

“I shared it with so many colleagues who already knew about it but did not know of the Elon connection,” Barnett said.  “So many people had followed and enjoyed this. Great fun.”

Eventually, news of the site reached its subject. Clinton, who declined to comment for this story, set aside five minutes or so to meet with Smith and Lambe after the secretary finished a meeting with the Japanese prime minister. For Smith, the moment was surreal.

“We only had a few minutes with her because she’s the Secretary of State and we’re just some guys from the Internet, but she was very nice,” Smith said. “She shook our hands and told us how much she liked our site, how funny she thought it was, how everybody was talking about it.”

Like a gambler riding a hot streak on a Vegas blackjack table, sometimes creators of Internet memes need to know when to keep playing and when to move on. For Texts from Hillary, that moment came after one week.

“We got to meet the subject of our meme and she submitted her own post and we sort of thought that that was the peak of what we could do,” Smith said.

Smith said the work the website required was beginning to interfere with his actual job at Public Campaign. Instead of risking a life in the unemployment line, Smith decided to hang up his tumblr while on top of the Internet world.