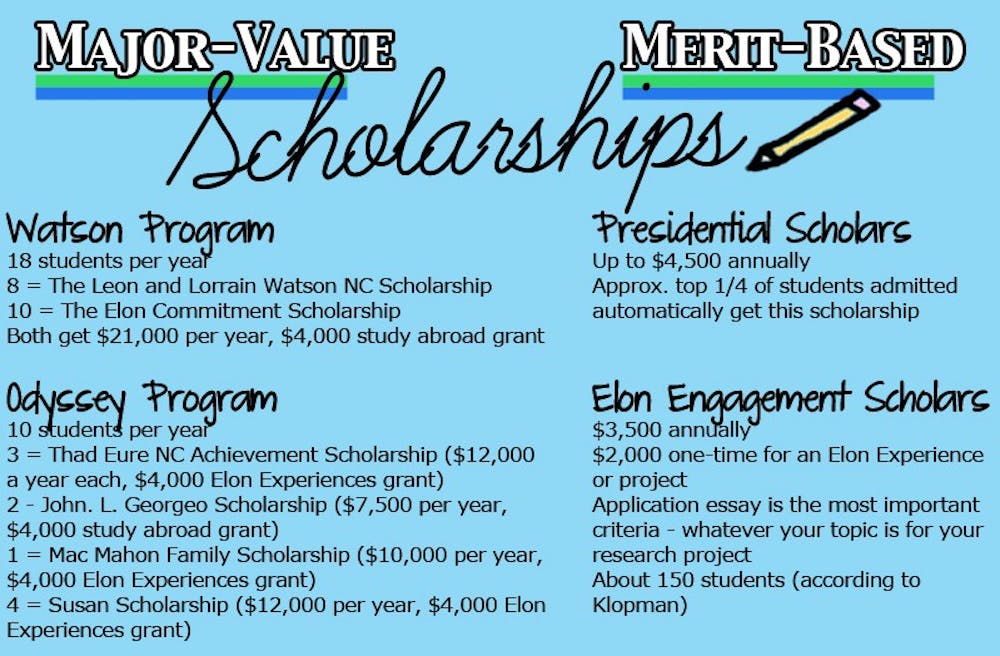 $38,460 is an ominous number. This is the total amount, including tuition, fees, room and board for an undergraduate to attend Elon University in the 2012-2013 school year.

About 70 percent of Elon students receive some kind of scholarship, whether merit-based, need-based, talent-based or other, according to Patrick Murphy, director of financial planning.

Both Murphy and Susan Klopman, vice president of admissions and financial planning, said the reason prices of scholarships aren’t as high is because the cost of tuition at Elon is lower than other similar private institutions. In comparison, Wake Forest University in Winston-Salem costs $54,860 for tuition, room and board and Davidson College in Davidson, costs $52,155 for tuition, room and board.

“I have parents email me all the time that say ‘this university is giving me $25,000 a year and you’re only giving me $7,000,’” Murphy said. “But you look at the price of the school and it’s $15,000 more per year. We are just very careful with how we spend so we can keep the tuition dollars down.”

Sophomore Brennan McDavid also likes the idea of keeping tuition costs low because if it costs more but had more scholarship, it would really cost about the same amount, she said. But, McDavid said she is trying to look for Elon scholarships right now and is having trouble finding any at all.

Though families recognize that Elon does not award students as much in scholarship as other schools, Klopman points to the university’s finances to explain the difference.

“The majority of our financial aid had to be generated by our annual operational funds,” Klopman said. “Our endowment doesn’t even begin to compare to most of our competitors. We simply can’t afford to hand out the high scholarships that many of our competitors do. That’s really more what students mean. It’s not that they didn’t get some support, in many cases. It’s that they didn’t get high-ticket support.”

Murphy said the school tries to spread the money that is brought in by the scholarship funds to as many students as possible to try and allow students more opportunity to come to Elon. He also said he recognizes that the school does need financial aid to support its students.

Freshman Omolayo Ojo, an honors fellow at Elon, receives $10,000 in scholarships annually from the Honors Program. But, the Kenan Scholar - Elon’s top award for incoming students that covers full tuition for four years- further alleviates the student’s financial concern. Without the Kenan Scholarship, Ojo said, she wouldn’t have attended Elon.

“Even if I would have had just the $10,000, I wouldn’t have been able to come to Elon because in-state schools for me, like University of Maryland, are much cheaper," she said.

Although the Kenan Scholarship has one of the biggest dollar values offered annually by the university, the university does have a wide variety of scholarships available, according to the financial planning staff. But a lot of smaller scholarships are shown in the fellows programs, which in some cases offer $3,500 annually to only a select number of students each year out of the fellows class. Although these scholarships do exist, the amount concerns students and parents when planning for college, financially.

“If I were an in-state student in North Carolina, I might have looked elsewhere because Elon was more expensive than those schools,” Ojo said.

Nevertheless, students' concerns regarding the discrepancy in prices continue to echo those parents express. Students think there are not a lot of scholarships offered by the university, according to Klopman.

“I’ve gone to the financial aid office and have not received very much help,” McDavid said. “They’ve given me paperwork for FAFSA but I’ve found that it’s really a lot of outside research. I feel like there isn’t a lot that I can get from the school.”

McDavid said she supports the initiative to distribute financial aid.

“I think that spreading out scholarships is a great idea,” she said. “There are so many people that I think have equal qualifications that deserve scholarships. It would be unfair if just one person got it when a lot of people deserve it.”

But both McDavid and Murphy can agree on this: Students and parents both want more scholarships. The school is working to meet that need, Murphy said.

“Our goal by 2020 is to double the money for need-based aid, because we historically have not had as much financial aid as a lot of schools comparable to us because our focus was using tuition revenue for professors, facilities and education programs, not necessarily for financial aid,” he said.