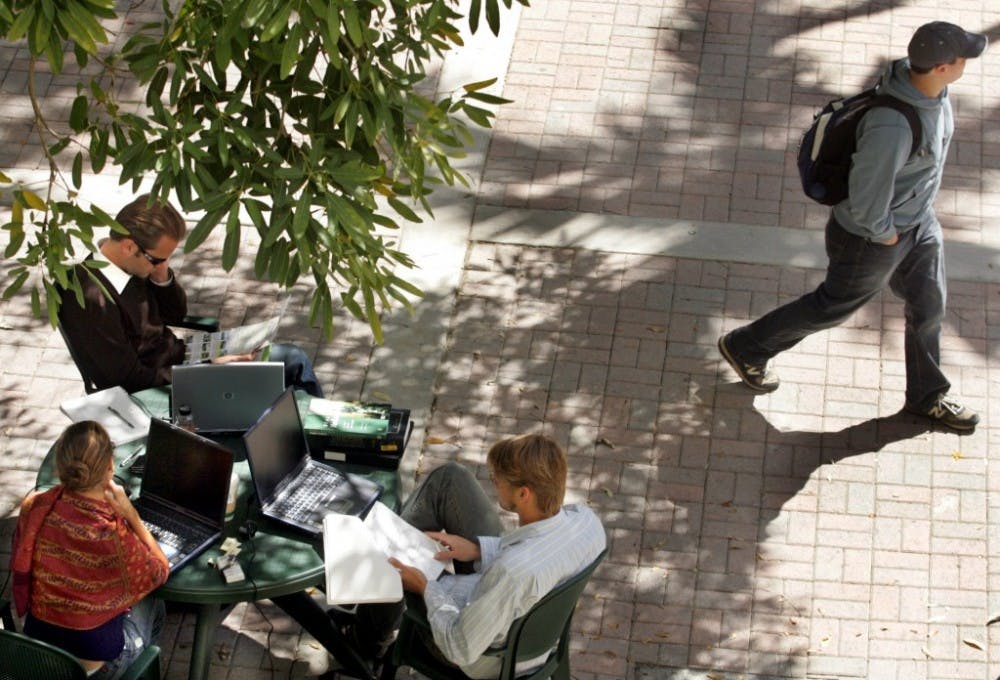 KRT LIFESTYLE STORY SLUGGED: CMP-WIRELESSCAMPUS KRT PHOTOGRAPH BY RAUL RUBIERA/MIAMI HERALD (SOUTH FLORIDA SUN-SENTINEL AND ORLANDO SENTINEL OUT) (March 13) The University of Miami has wireless computer internet connection around campus that allows students take advantage of it - inside and outside of the classroom. Students (left to right) Matthias Schlveter, Tamy Gloobe and Jens Bopp, call this outdoors table their office because they spend time here working on their laptop computers. (cdm) 2005 (Diversity)

I love my laptop. I remember the day I got in at the end of my senior year of high school, ready to bring it to college. And I use it constantly every day.

MacBook Pros (and the occasional Windows PC, ha!) can be seen everywhere on college campuses. We use Blackboard and Moodle to get our assignments for class, email to keep in constant contact with our professors and our bosses, and the Internet to look up the latest statistics for our paper for class. So I ask this in the most meaningful way possible: What in the world did we do before technology came into the classroom?

OK, that might be a bit extreme. But think about it — your life at Elon right now as a student. When was the last time you went to a class without your computer (if your professor didn’t specifically prohibit them)?

According to TechVert.com, 85 percent of U.S. schools have multimedia computers for student use and 64 percent of U.S. schools have Internet access. And check it out — according to the same information, the Kindle has been tested at seven universities as a textbook replacement. Mashable reported that while 27 percent of students say their laptop is the most important thing in their backpack, only 10 percent of students say their textbooks are the most important thing.

The access to Internet and online reading is a quicker, more effective way to give out information to large groups of people, such as a class. The Internet in schools also allows students to familiarize themselves with topics more easily, and let them connect with the university community better.

But the technology world in schools is not perfect. Digg.com reports that 64 percent of teenage students used emoticons at some point in schoolwork and that two-thirds use informal abbreviations, such as Internet shortcuts. These could be found in actual formal writing pieces. Now, that’s where I think there is a downfall. We are so used to letting the Internet do the work for us that we don’t take the time to research and investigate a topic to a point where we can elaborate about it intelligently.

Yeah, there are mixed reviews about this subject and definitely mixed opinions. As a communications student, of course I love the Internet. I take the majority of notes in class on my laptop and use my phone to look up information. I am definitely an avid technology user both in and outside of the classroom. But I think it’s important to remember that there are actual people behind those emails, text messages and Blackboard updates and we should all try to talk to them once in a while.