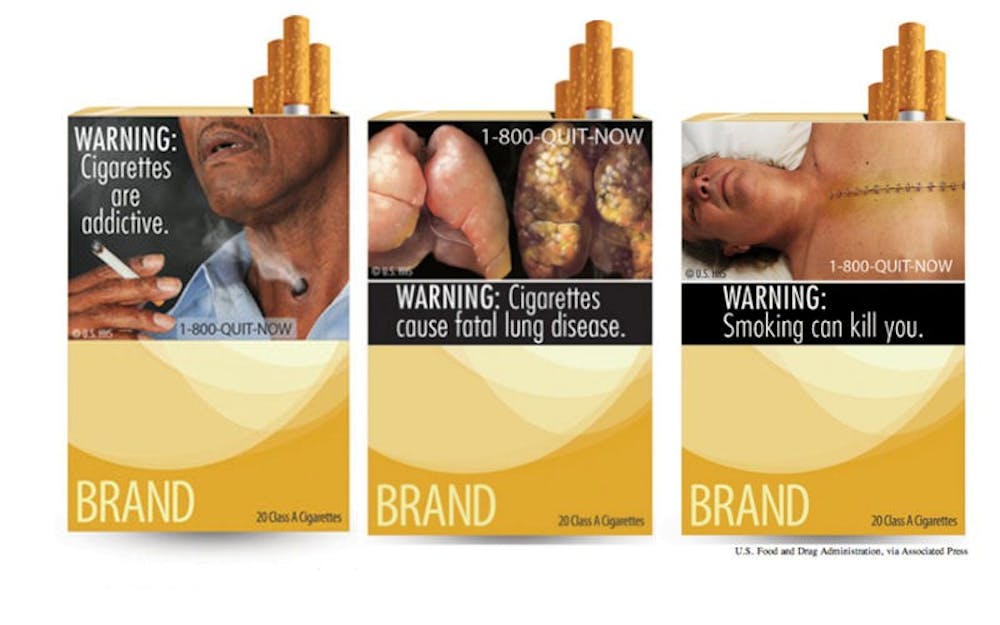 A U.S. district judge ruled this month that a law that would put new graphic warning labels on cigarette packs by September 2012 was unconstitutional. The decison sparked discussion on Elon's campus concerning the effects the proposed graphics would have had and whether the ruling was justified.

The nine new warning labels, first unveiled by the Food and Drug Administration in June 2011, were part of the 2009 Family Smoking Prevention and Tobacco Control Act. The new labels would take up 50 percent of cigarette packs and include detailed examples of the effects of smoking, along with messages such as “Warning: Cigarettes cause fatal lung disease.”

On Elon’s campus, smokers and non-smokers have varying thoughts about the effects these graphic labels would have if they did end up on American packs.

“I feel like if people are going to buy a box of cigarettes with this picture on them, they know what they’re getting into,” said freshman Emily Haring, a non-smoker.

Those who do smoke said they doubt the effectiveness of the proposed labels. Yoram Lubling, professor of philosophy and a smoker, said he feels the labels represent unequal attention given to preventing smoking in society.

“I think that if those that are so concerned about others, (they) should be consistent about it,” Lubling said. “There should also be the same pictures on hamburgers to show you people with diabetes or overweight (people). The preoccupation with smoking is simply a fashion that fits into all sorts of paternalistic practices when people don’t have better things to do.”

But sophomore Dave Stone, who is not a smoker, thinks the labels could have real value.

“I think at a young age, people don’t realize the long-term effects of smoking,” Stone said. “If you can throw it on the packet, then every time they go in for a drag, they can see what they could be getting themselves into.”

Other countries have cigarette warning labels larger than those in the United States, and some also have graphical depictions.

“They’ve done that in Canada for a while — for about 15 years— really graphic warnings really similar to these," said junior David Carol.

In the recent court decision, Judge Richard Leon said the new labels did not meet the legal precedent of being factual and uncontroversial, and that Congress gave no thought to the First Amendment implications associated with the mandated labels.

Lubling agrees with the message of Leon’s ruling.

“I’m not a lawyer, but it sounds right to me,” Lubling said. “People who sell products have the right to sell the products the way they perceive. I’m not suggesting that we’re ignorant about the consequences of smoking, but imagine that the government would force automakers to have posters in car dealerships of the worst accidents associated with a particular car.”

Even those who believe the labels could do good, such as Stone, agreed with Leon’s ruling on the constitutionality of the new packaging.

“I don’t think the government has the right to just throw whatever they want onto a packet and bash this industry,” Stone said.