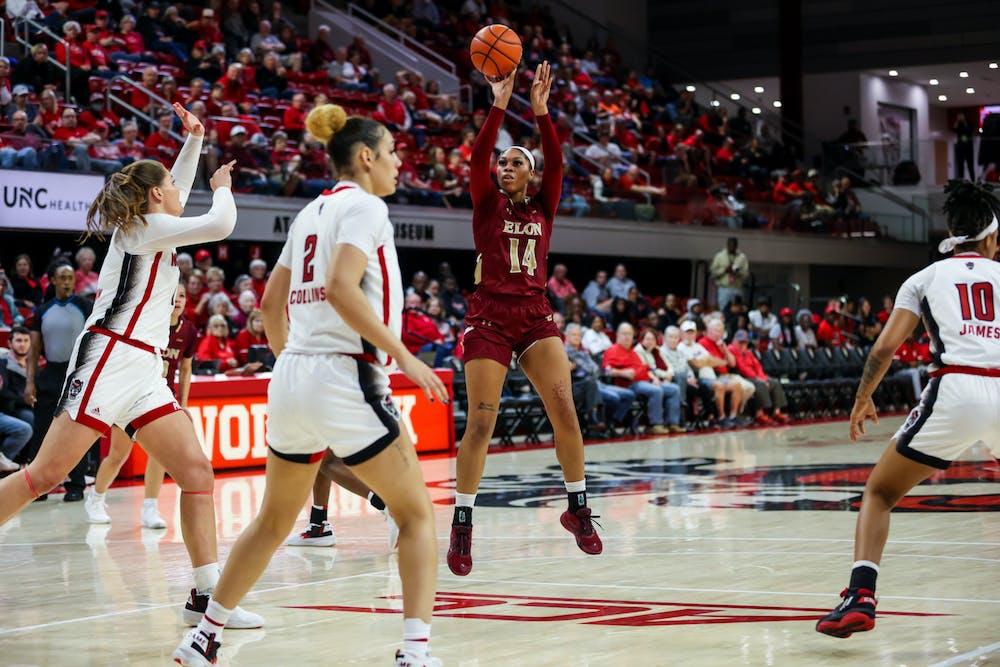 With her final season on Elon’s women’s basketball team underway, graduate student Evonna McGill continues to be a leader on the court, even as she prepares for her future off of it. But McGill said she has come a long way with Elon since transferring from University of North Carolina Asheville and meeting Elon women’s basketball head coach Charlotte Smith.

“Ever since I’ve been here, Coach Smith and her staff have just given me so much room and instill so much confidence in me to grow in ways I never even knew I could grow,” McGill said. “They have taught me so many things; they taught me patience, they taught me to get out of my shell, they taught me that I’m more than just a big in the post, I’m somebody who can contribute in many different ways.”

McGill has stepped up as a leader this year, as the team has six new freshmen and two red-shirt freshmen. She said it’s a challenge at times to go through practices with patience but remembers she’s there to set an example.

“Definitely a challenge being that they are young, so they’re fresh out of high school, but at the same time, they are so ready, they’re hungry, they’re motivated, they’re not set in their own ways. So it makes it easier for me to have patience and makes it easy on them to be open,” McGill said.

Smith said she is trying to teach McGill to become a leader, as there are big expectations with the amount of young girls on the team.

“There’s the saying, ‘Heavy is the head that wears the crown.’ And right now she’s wearing the crown because she’s captain of the team. And so that’s been a transition for her and a growing and a growth process for her,” Smith said.

Smith said that she is trying to teach McGill how to communicate and hold the younger girls accountable.

“They say that leaders emulate the behaviors that they desire. And so it’s my job to emulate being a great leader so she has something to watch. But it’s also my job to teach her how to lead and have those conversations. ‘This is where you could be a little bit better in terms of communication. This is where you hold people accountable,’” Smith said.

Smith said that McGill has done a great job helping lead the team so far and that she has seen McGill be tough on the team in practice but also be caring throughout.

“She’s not afraid to hold people accountable. That’s the one thing that I can depend on to be vocal in terms of when things are not going right. And then she’s also nurturing and loving as a leader in being patient with the younger players, especially when it comes to potential position breakdown, which we do every day. So she’s the leader of the post,” Smith said.

Freshmen Raven Preston and Chloe Williams said McGill’s leadership style has helped them settle in with the team. Preston said that having McGill on the team gives her someone to look for on and off the court for guidance.

“Just having a good mentor and somebody we can look up to helps a lot, and being a friend on and off the court helps too, because this is sometimes hard. So having somebody that’s been through it, and has been through the system and program before just makes life a whole lot easier,” Preston said.

“Evonna is that tough-love sister, she’s going to give it to you real,” Williams said. “She’s going to tell you how you get to here, but I feel like it’s the best type of love because she’s only looking out for you, but she wants what’s best for you and the whole team.”

As for McGill, she said that her final year came fast, but having a fifth year of eligibility due to the pandemic has allowed her to play out one more season with the team. She said playing her final first game of the season at home was a great moment to look back on her years here.

“Honestly, it is very sweet. Like, people say all the time, ‘the time goes by so quick.’ It really did,” McGill said. “COVID was — I’m not going to say it was a blessing because it took away a lot — but COVID gave me the opportunity to not only transfer from my old school but also gave me an extra year to really take in everything I was taking for granted and just be able to go hard this year.”

Regarding her future, McGill said she has many different things on her mind, but right now, she is focused on this season.

“I have thought about that for a long time, and it’s still up in the air whether I want to be a graduate assistant or I want to go out into the work field. Whether I want to not get my master’s. I’m just focusing on a season and not really stressing myself out too much about what’s next,” McGill said.

McGill said she hopes the finale of her five-year career will be a championship win, and she thinks this team can do it.

“We may be young, but our team has so much potential,” McGill said. “If anybody comes out to the games they will see our team is different, they’re hungry. We work together. I have a lot of high hopes for this team.”