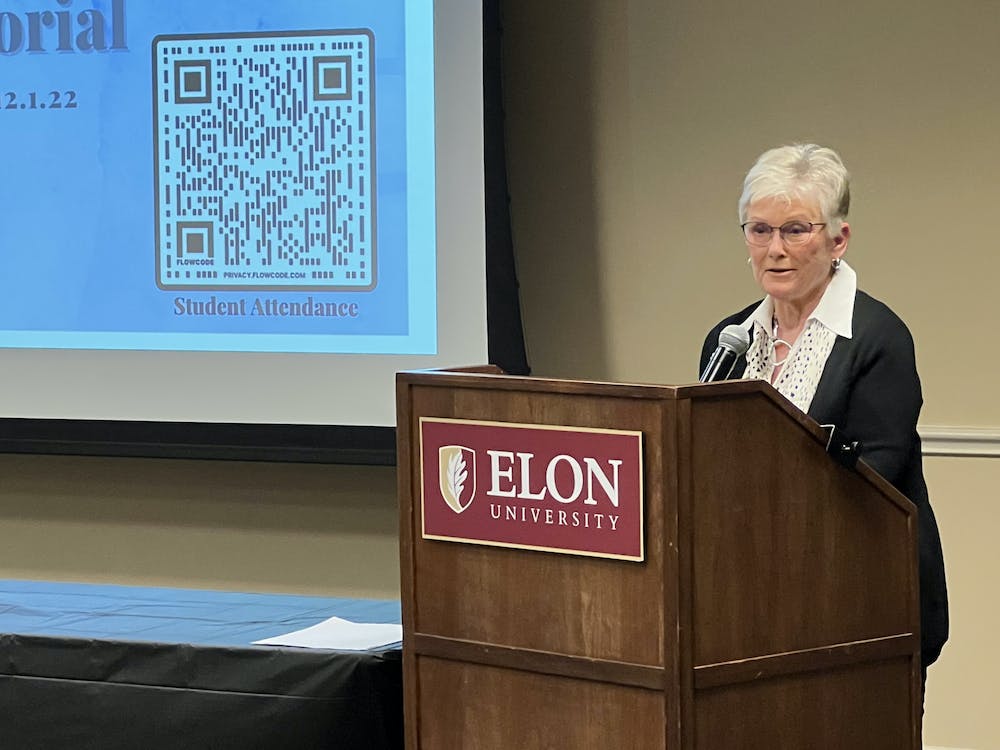 Photo by Ryan Kupperman | Elon News Network
Former Elon University Dean of Admissions Susan Klopman speaks as a guest speaker at the fall 2022 Human Donor Memorial on Thursday, Dec. 1 in upstairs McCoy Commons. “We believe that the gift of life we have been given can also be a gift to others. To you. To the Anatomical Gift Program. You have no idea how much peace that belief, and the ability to make this choice, had for me. And I suspect for all donors,” Klopman said.

Elon University’s former Dean of Admissions Susan Klopman served at Elon for 27 years and got the idea to sign up for Elon’s Anatomical Gift Program as an anatomical donor in the produce section of Harris Teeter — making her the first person to sign up.

“I promise you that before I even knew it, I was saying, sign me up. I'll be your first donor. I have no idea where that transformational life choice came from. But it did. And I followed through — never doubting the choice. Hopefully, it will align so that I can fulfill that promise,” Klopman said. “I'm at peace with it, joyful about it and so hopeful that it is a choice that can be fulfilled. … You must somehow, through some experience, believe that your life matters.”

Klopman was a guest speaker at Elon’s fall 2022 Human Donor Memorial on Dec. 1. Elon’s Human Anatomy Lab works with anatomical donors who dedicate their bodies to the Anatomical Gift Program, which allows students and professors to study donors for science and education after death.

"If my life does matter, then I'd like to make a decision about my life's end. Is there a way my life can have meaning in death? I believe there is, and that's what we donors share."

“If my life does matter, then I'd like to make a decision about my life's end. Is there a way my life can have meaning in death? I believe there is, and that's what we donors share,” Klopman said during the event. “We believe that the gift of life we have been given can also be a gift to others. To you. To the Anatomical Gift Program. You have no idea how much peace that belief, and the ability to make this choice, had for me. And I suspect for all donors.”

“It's a way to commemorate the silent teachers,” senior anatomy lab foreman Smythe Lefebvre said. “The Human Donor Memorial is a way to pay our respects and thank them for everything they've been able to teach us throughout this semester. … At the end of the day, this is a human that's donated their body to science, so I think it is really important to pay our respects to them.”

Lefebvre started the service by, for the first time ever, playing a video of Elon’s anatomy lab alumni talking about how much the program meant to them and how it helped them get to where they are or where they want to be, both as professionals in the field and as human beings.

“I wasn't set on applying to this program until I came to the Human Donor Memorial, because it was such a special event for me and I just realized how amazing it was and how much I'd actually learned from taking anatomy and learning off of these silent teachers,” Lefebvre said.

After the video played, Lefebvre introduced Coordinator of the Undergraduate Human Anatomy Laboratory Matthew Clark, who started coordinating the memorials when he arrived at Elon and originally coined the term silent teachers.

“Every semester, it is absolutely amazing to me how loud they talk to us. They say so much to us in the laboratory, but they never open their mouths at all,” Clark said through tears forming in his eyes. “It's been a part of my heart since I've been here since 1999. If I cry, just ignore me, because it is that special to me to be standing here after all these years and see all the things that all of you continue to do to support this initiative.”

After he spoke, Clark gave the podium to Director of the Anatomical Gift Program Dianne Person, who talked about the history and significance of the program.

“I am honored to stand with you in deep appreciation for the silent teachers who deliberately made a conscious choice to serve you in your study of human anatomy,” Person said. “They gave up themselves because they wanted to make a difference with their end of life. And I know that they would be deeply honored for the compassion, dignity and respect that you have exemplified today. You can honor them in a paramount way by acknowledging the greatest gift toward your health care education. You have helped them create a legacy.”

Klopman then took the podium after Person, once Lefebvre gave her a formal introduction. Former vice president for admissions and financial planning, Klopman retired in 2012 and was awarded the Elon medallion for long standing memorial service in 2013. In 2018, a suite in the Inman Admissions building was named in her honor to recognize her as a leader of undergraduate and graduate admissions strategies that later became the model for others in higher education.

During the ceremony, she was awarded a plaque from the Anatomical Gift Program for being the first person to sign up to be an anatomical donor for the Elon Human Anatomy Lab.

“She was the first person to put her name on there, so we gave her that plaque as a way to commemorate her donation to the program,” Lefebvre said. “It's impactful to see that she will be a silent teacher one day, and to be able to have her come speak for us and to have her be the very first name on the list — we've never had somebody that’s … alive on the list come and speak for us. So I think it was really impactful to see that one day she will be a silent teacher, but she still took the time out of her day to come and talk to us and show, ultimately, why she decided to donate her body.”

After all the speakers spoke, Lefebvre opened up the floor to any students who wanted to take the time to talk about what the silent teachers and the anatomy program meant to them over the course of the semester. With nearly 10 students taking the podium, Lefebvre said there have never been so many students come up to speak at a memorial.

Similarly, with almost 75 people in attendance, this was the largest showing ever — topping the audience of roughly 60 people last fall.

“I'm really, really happy with the turnout and especially the students who chose to get up and speak,” Lefebvre said. “I was also really pleased about that, to see that they're not only being impacted by it, but they're being moved enough to get up and say something about it.”

The ceremony closed with revealing information about each of the four anatomical donors, including their names, interests and causes of death — which have also been kept confidential out of respect and privacy for the donors and their families — as well as taking a moment of silence to honor the silent teachers and pay respects.

According to previous Elon News Network coverage, the Anatomical Gift Program is the first will-bodied program in the state of North Carolina to be unaffiliated with a medical school. To be a will-bodied program means the individuals must choose for themselves to be donated once they are no longer living, as opposed to any next of kin making the choice for them.

“Each one of your silent teachers chose the name that they wanted to be addressed by. Each one of your silent teachers chose to be here for you. First person consent. An honor. A choice,” Person said. “Common threads weaving words like fabric into a beautiful quilt, symbolic of their noble intentions. Our donors are the true givers in every sense of the word.”