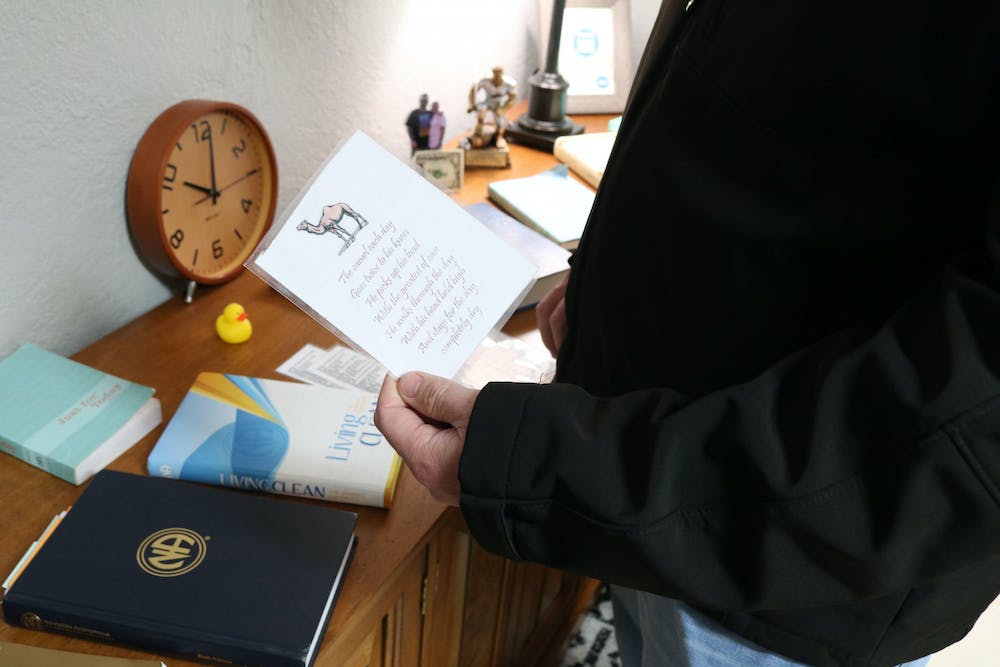 
The mascot for Residential Treatment Services of Alamance is a camel. The card reads, "The camel each day goes twice to his knees. He picks up his load with the greatest of ease. He walks through the day with his head held high and stays for the day completely dry." It symbolizes that an alcoholic has the strength to not drink for a day.

The decision to seek treatment came after Perry was arrested for a DWI when his court-appointed attorney’s son — who was a resident in the facility — told Perry he saw his potential. Perry said he was terrified, but he took the step to accept the man’s help.

“I was probably screaming for it without saying it, and it was just a godsend. I got in up here terrified. I've never been out of Davidson County before. I figured I would never leave just out of fear,” Perry said. “Fear just consumed my life.”

Perry grew up in Davidson County in a middle class family that never discussed alcohol or drug use, and he graduated high school without using substances. After graduating high school, he said his life took a turn for the worse. He had an injury and was unable to play college football as he planned and,as a result, he began hanging out with the wrong crowd.

“At the end, I had lost everything. I had pushed everybody away, and it was just me. I hated who I was, but I didn't recognize that person either,” Perry said. “Finally, I allowed someone to help me, and that's what it took. It took me being broken. Luckily I didn't die because a lot of people die before they get to that point.”

Coordinator for Health Services for the Alamance County Health Department Ashley Motley oversees services for mental health and substance use initiatives for the county. She said as of Oct. 25, the county has seen 33 suspected overdose deaths in 2022. She said her work has shown her how widespread the issue is.

Motley said in addition to the programs the health department already has in place, it is also working to determine how it will use opioid settlement dollars from the state. Over the next 18 years, the health department will receive approximately $9 million, according to the North Carolina Opioid Settlement.

Karen Webb, director for Alamance Citizens for a Drug Free Community, said her group hosts events such as safe disposal days for medications. She said drug use is not talked about enough in Alamance County.

“A lot of people in our area have no idea the severity. They think about people that are addicted, say to the opioids or to fentanyl or heroin that are using, they assume it's those homeless people or those people that could do better if they wanted to,” Webb said. “If I go into a group, whether it's a civic group, a church group, any kind of group, and ask how many people in here know of someone addicted to these opioids or know someone who knows someone — I don't ask them to raise their hand, but most people do. The next part of that is if you don't, you really do know. You just don't know it yet.”

In 2020, Perry left the residential treatment center and moved to the coast of North Carolina to begin his recovery journey outside of the facility. He then came back and met his girlfriend, who is also in active recovery. He now attends college at University of North Carolina at Greensboro and plans to graduate with his undergraduate degree in May 2023. His next step is to attend graduate school.

Perry now works as the facility manager at Residential Treatment Services of Alamance, where he learned a sober lifestyle four years ago. He said treatment, however, is not one size fits all.

Cognitive behavioral therapy, or CBT, is talk therapy where a person works one-on-one with a mental health professional, according to the Mayo Clinic. Treatment can consist of behavioral counseling, medication, medical devices and application, evaluation and treatment for co-occurring mental health issues, and long term follow-ups to prevent relapse, according to the National Institutes of Health.

Perry said it is important to recognize that substance abuse ties directly to mental health. He said mental health is actively being destigmatized, but it is not the same for substance abuse. For him, it took seeing a psychiatrist to understand his substance use disorder.

"They say wait a year before you make any major decisions, and I think that's important, especially with drug use, because it changes the brain so much that it takes a while for the brain to heal enough for any kind of doctor psychiatrist to make heads or tails of anything, and so that's what I did," Perry said. "I was able to address some things that I think probably most likely contributed to the drug use in the first place."

When Perry evaluates his work helping addicts where he once was, he said he offers a more enhanced perspective.

“By me going through the struggles and coming out the other side, I can give these guys some hope. That's the one thing that they want to hold onto, is the hope that they can get well,” Perry said. “They know if you've experienced the same things because it's really nothing you can explain to somebody and get them to understand and less you've experienced it.”

Perry said he considers himself still in active recovery, but it doesn’t trigger him to be working at the facility he got sober in. Instead, it is a further deterrent.

“When you see people come in and you see that pain in their eyes and that misery, for me, that's a reminder of how bad it is,” Perry said. “If anything, it does not make me want to get high because I don't want to feel like that because I can relate to the feeling of just giving up hopeless, helpless, useless. I mean, that's how we feel when we finally make it into recovery.”

Like Perry, Alamance County resident Maggie Hart is in recovery. Ten years ago, she got sober after being addicted to heroin. She said originally, those around her provided little in terms of helpful advice, simply telling her to stop doing drugs or to practice abstinence. Though she tried quitting, she was only able to get a handle on her addiction through medication assisted treatment.

Medication assistance is one of a variety of treatment and prevention strategies that falls under the umbrella of “harm reduction.” Harm reduction is a recovery strategy aimed at reducing the harm associated with using drugs, rather than eliminating use entirely.

Hart said there is a stigma attached to seeking out or providing such services. In 2021, she founded Starting Point Rural Harm Reduction, which provides harm reduction supplies to the Alamance and Orange County communities while also educating others about the topic. The organization receives donations from the state and the Alamance County health department. Hart and her team are applying for grants to receive additional funding.

In 2021, nonprofit Alamance Cares, which operated a syringe exchange program, shut down. The group donated unused supplies to Hart's organization. Hart said these supplies aid to decrease the amount of overdose deaths.

“It's killing people. It keeps people from getting help and it keeps people sick, so it's something that I think it's really important to push back against,” Hart said. “We just try to educate where we can, because I think that's one of the best things you can do to combat stigma is educate and because a lot of times that's just where it comes from is ignorance.”

A common argument against harm reduction, in Hart’s experience, is that providing clean syringes enables the addict and keeps them using drugs. However, Perry said it’s about saving lives.

“Most people want help at some point. If they get to where I was at, they definitely do. They just don't know how. People really don't know anything about resources,” Perry said. “If you're out there in the community and you're assisting people, you may have a chance to help save a life, and for me, you can't put a price on that.”

On March 28, President Joe Biden released his budget for 2023, which includes increased funding for harm reduction services. Last December, his administration announced a $30 million grant for harm reduction services. According to the Substance Abuse and Mental Health Services Administration, this offers funding for a variety of activities, including distribution of FDA-approved reversal medications.

However, Hart said the stigma is still prevalent, even with improving efforts to destigmatize the matter. She said harm reduction is like a seatbelt, as it gives people tools to keep them safe.

“I share my own story because it's easy for people to kind of villainize and stigmatize when it's this abstract concept of imagining just a drug addict on the street, whereas when you have someone standing in front of you, it kind of puts a face on it and can make people a little more willing to listen and have an open mind,” Hart said. “You can't get everybody. Some people are really not willing to hear it, and when that's the case, then you just have to kind of move on.”

Hart’s next step is to get an office, hire employees instead of volunteers and educate in schools. Currently, her organization delivers syringes and safe syringe disposals to residents in the community.

Perry wants his community to know that recovery is possible.

“All the time you see them passing away here, the people leave, you hear about crazy stories —  they got run over, they froze to death, things like that. In the rooms, you hear about it all the time, and that stuff just makes me really grateful,” Perry said. “People say, 'Hey Todd, how you doing today?' I'm like, 'Living the dream.' The reality is I often feel that way. I thought I would always have to have a substance in my body to function.”