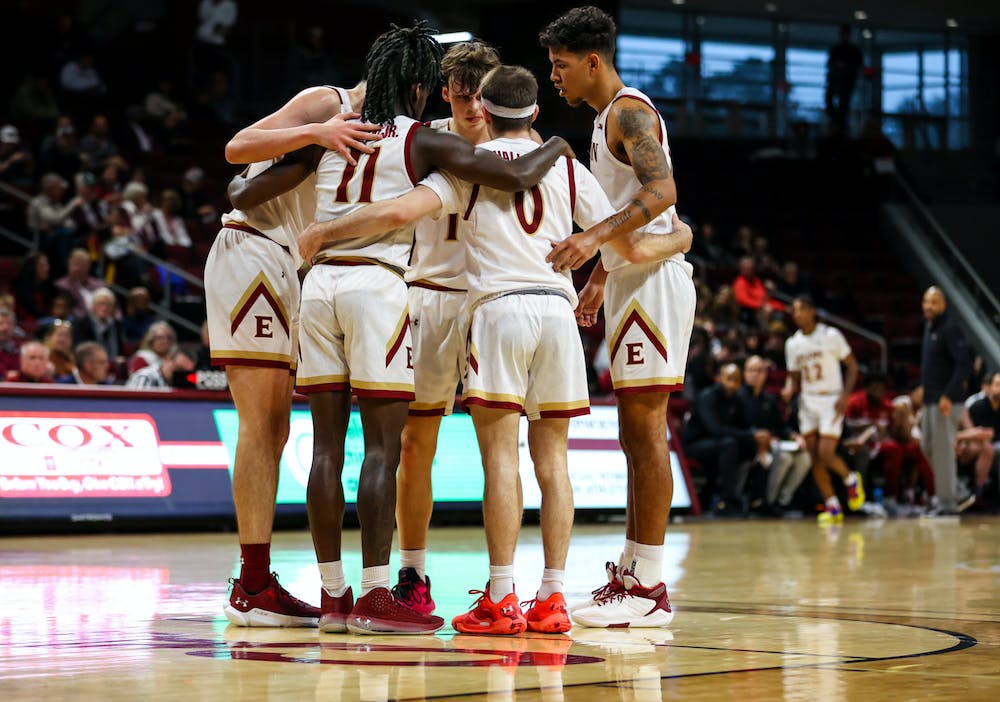 
Players on the Elon University men’s basketball team huddle after a foul during its game against the University of North Carolina at Greensboro on Dec. 3 at Schar Center. Elon lost 65-61.

In a hard-fought battle against the University of North Carolina at Greensboro Spartans on Saturday, the Elon University men's basketball team fell 65-61 for its eighth straight defeat.

Despite Elon suffering its third consecutive loss at home, this game felt a little different, according to head coach Billy Taylor.

“I’m really proud of our guys' effort tonight,” Taylor said. “There is no doubt that we really battled hard. Especially after being down 10 at the end of the first half. We had a lot of adversity to overcome. I’m really pleased with how we came out in the second half. To have guys step up and give us quality minutes of the bench was really good to see. There are a lot of positives to take away from this experience. We didn’t get the win, but I like the direction that we’re heading.”

The game began with a change of scenery in Elon’s starting lineup. Freshman guard LA Pratt filled in for Zac Ervin and graduate student John Bowen III for Torrence Watson. Taylor praised all four of his men for how they handled this change.

“I could not be more proud of Zac Ervin. He handled this exactly how I knew he would, like a professional. Zac had a great week of practice, and stayed diligent with preparing for this game. He showed up when his number was called, and did a lot of nice things for us on both ends of the floor,” Taylor said. “I’m really proud of LA and John. They both had a great week of practice, and we felt comfortable with this change because of how much work both guys have put in this season.”

This was as much a change of scenery for graduate student point guard Sean Halloran as it was for Taylor.

“We need Zac every game to help us put the ball in the basket, and he did that tonight. I knew he would show up for us tonight,” Halloran said. “Regardless of if he starts the game for us, we can all count on Zac for showing up and showing out every time he touches the floor.”

After giving up an 11-0 run in the early minutes of play, the Phoenix trailed the Spartans for the majority of the first half. However, Taylor brought his team out of the locker room from halftime with a rejuvenated sense of urgency to start the second 20 minutes of play.

“We talked about playing with more pace and more tempo,” Taylor said. “We needed to start playing our game. I saw an increase in intensity and aggressiveness from our guys, and I was really pleased with how we showed up in the second half.”

And show up in the second half they did.

Halloran’s second half surge helped position Elon within striking distance in the second half. Halloran recorded 21 points on the night to go along with five rebounds and five assists. All 21 points were scored in the final 20 minutes of play.

“I was having trouble penetrating the defense and getting to my spots in the first half. We went back to the locker room at half, and we really focused on coming out more aggressive. And that’s what I tried to do,” Halloran said. “We made some adjustments on the offensive side of the floor, and I just went out there and did what I know I can do. I was able to get to my spots, and thankfully the ball was going through the net.”

A second half battle between the Spartans and the Phoenix concluded with a 65-61 victory in UNCG’s favor. However, Taylor said there is still optimism in Elon’s locker room.

“I’m really proud of our guys tonight. We started two freshmen in Max Mackinnon and LA Pratt, and one sophomore in Sam Sherry. This is a really young team that is still finding their way,” Taylor said. “Every game, we’re getting better. And that gives me hope as we approach the start of conference play.”

The Phoenix will be back in action on Dec. 11 to take on the Johnson and Wales University Wildcats, a Division II team, at home. Taylor is hopeful that the players will use the week off to get their mind and bodies right for this game.

“This is a big week for our guys. We’re going to use these eight days to get ready for Johnson and Wales,” Taylor said. “We’re going to keep working, and build off of the momentum we created in the second half here tonight. There’s still a lot of basketball left to be played this season, and we’re going to continue to improve in every aspect of our game.”