Ted Budd elected to US Senate to represent NC

The Republican candidate won 50.71% of the vote 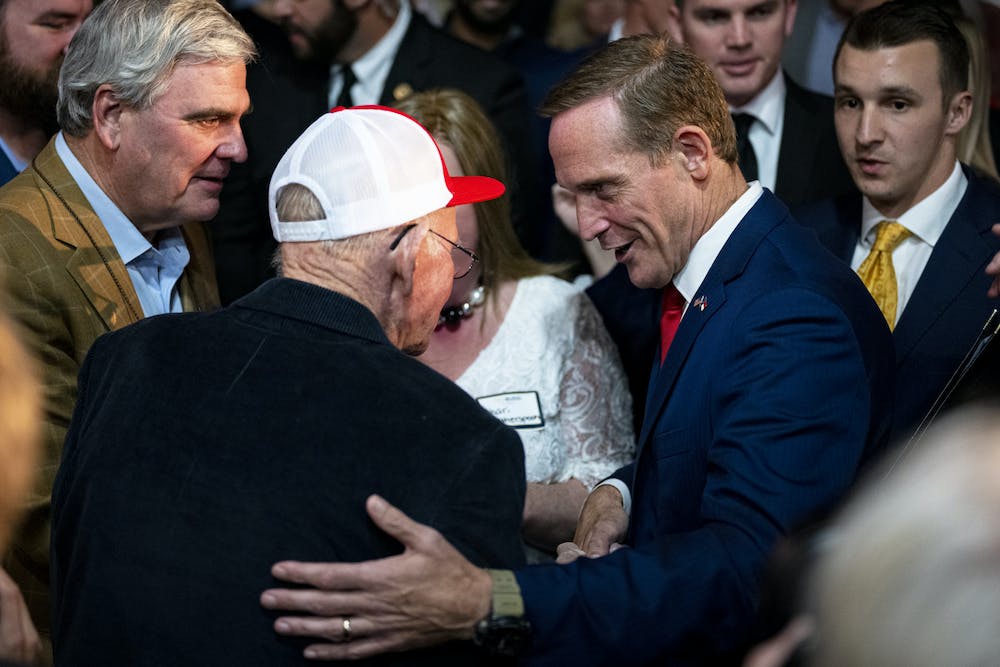 Photo by Luke Johnson | Elon News Network
Representative Ted Budd, who ran as the Republican candidate for the open North Carolina Senate seat, talks with Robert Ray during the Election Day watch party on Nov. 8 at the Marriott in Winston-Salem, North Carolina.

Republican Ted Budd won the seat to represent North Carolina in the U.S. Senate against his opponent, Democrat Cheri Beasley, winning 50.71% of the vote — or 1,891,342 votes — according to the Associated Press.

“As someone who was born and raised here in North Carolina, the state is part of me, it’s in my bones,” Budd said at his election event at the Marriott in Winston-Salem on Nov. 8. “And I want to make the old north state that much better again.”

Budd will be taking current North Carolina Senator Republican Richard Burr’s seat, who was elected in 2004 and did not run for reelection. As of 1:51 a.m. Nov. 9, election results dictate that the Senate has a 48 to 47 Democratic majority.

Budd took to the stage at roughly 11:45 p.m. Tuesday evening, where he was prefaced by North Carolina Lieutenant Governor Mark Robinson, North Carolina U.S. Senator Thom Tillis and Chairman of the North Carolina Republican Party Michael Whatley before being welcomed by an eruption of applause and cheers.

“I believe we’ll control the House. And then we’re going to have to get up there, be reasonable, address the concerns of this nation and try and heal it after almost two years of absolute devastation,” Tillis said. “People are suffering, and we got to work very, very hard to heal this nation. And I believe that Ted Budd is going to be one of those people to do it.”

Budd thanked Robinson, Tillis and Whatley, as well as God, his family and the people of North Carolina for his election victory.

“It’s time that we honor the service of our men and women in uniform by restoring American strength to the world stage. A strong America keeps our citizens safe and the world more peaceful. Friends, tonight’s victory is a humbling moment for me. It’s a tremendous privilege to be able to serve you,” Budd said.

Shari woke up at 6 a.m. to work the polls in her home town of Hiddenite, North Carolina. After they closed at 7:30 p.m., Shari drove about 30 minutes to Robert’s home in Harmony, North Carolina, and another 30 minutes from Harmony to Winston-Salem.

“I’m excited about Ted, I think he did well in the House,” Shari said. “Overall he did a great job and I think he’ll do great in the Senate too.”

Dale and Brenda Cline also drove just over an hour from their home town of Hickory, North Carolina, to hear Budd speak. The couple said they are early and big supporters of Budd, and are very satisfied with the turnout of his election event — roughly 500 people in total between the ballroom where Budd spoke and the conference rooms spanning the hotel.

“Tells me the kind of night we all hope to have,” Dale said. “From all I read and hear, we’re going to have a big night for the country and we need it badly. … I’ll just get right to it, Budd ‘22, Trump ‘24. This is the best night I’ve had in many years.”

Shari agreed that the night was grounds for celebration for both her and her father.

Dale and Brenda both said they hope that voting for Budd results in less government, a more stable economy, safer foreign policy and border control. Dale also said that with Budd’s win, he anticipates that Trump will announce his 2024 campaign for president next Tuesday — with Gov. of Florida Ron DeSantis as his vice president.

“I will say that she ran a great successful race and she gave inspiration to other people just like I,” Mongo said.

Budd said during his speech that he had the chance to talk with Beasley over the phone once results were announced, and thanked her for her contributions to the state and to the race.

“I also want to take a moment and recognize my opponent, Justice Cheri Beasley,” Budd said. “I want to thank her for her service to our state and for running a spirited race.”

Budd said he looks forward to serving the country as well as the people of North Carolina, and attributes his success and work ethic to family values.

“My grandfather, who was born in 1890, he had a saying that’s become our family motto down through the years. It’s very simple and it’s very straightforward. It’s ‘just do what you say you’re going to do,’” Budd said. “Well folks, that’s how I’ve operated throughout my life. And that’s the kind of senator that I’m going to be for North Carolina.”

Fiona McAllister contributed to the reporting of this story.