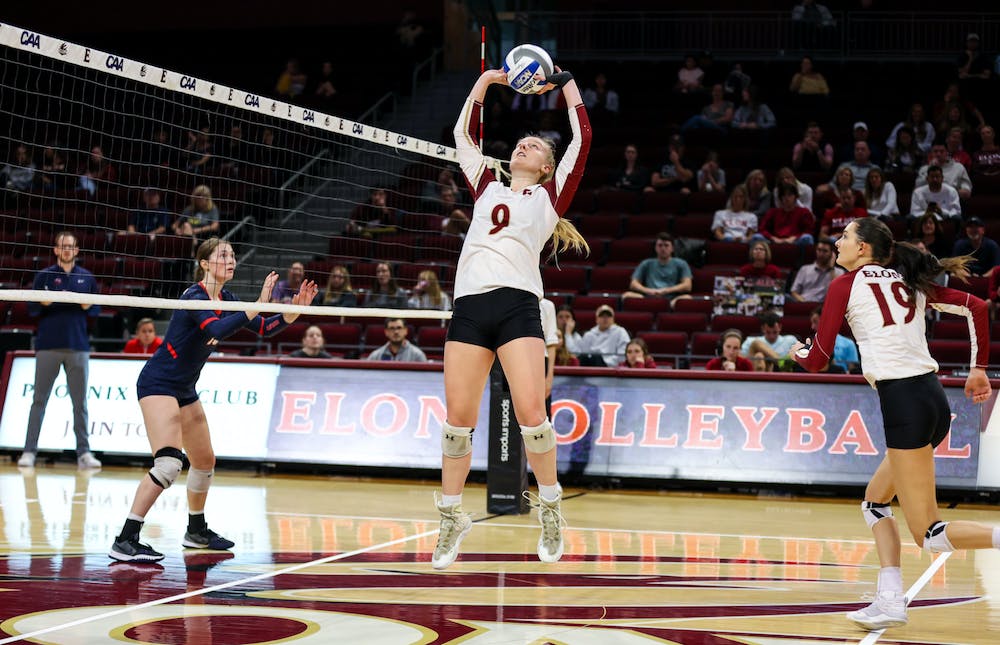 The Elon University volleyball team kicked off its senior weekend strong, winning three straight sets against the Stony Brook University Seawolves on Saturday. This weekend is the Phoenix’s last set of matches before the Colonial Athletic Association Tournament begins on Nov. 17.

The Phoenix came into the match with a five-match conference win streak, which began in its last match in Schar Center against College of Charleston on Oct. 23. Now at six, the Phoenix has reached its longest conference winning streak since joining the CAA in 2014.

“We know that every team in this conference is really strong and that we have to bring it every day,” head coach Mary Tendler said. “We are trying to be on top of our game, not just for the match but focusing on each point and trying to battle for each point.”

Senior setter Haylie Clark said the team’s mental and physical improvements since the beginning of the season have played a big role in its performance now.

“All of the younger players are meshed really well,” Clark said. “Everything is just a working machine and it’s flowing really nicely.”

The Phoenix got an early 6-3 lead in the first set, with senior outside hitter Leah Daniel delivering the first three points of the match for the Phoenix with kills. The Phoenix offense was on fire, as Elon led the majority of the set and won it, 25-18.

“Especially against a tough serving team, it was crazy we were just diming balls left and right,” Clark said. “If we could do that tomorrow, we’re crushing them.”

The Seawolves came back hitting hard and fast in the second set, slowing down the Phoenix’s momentum as the teams went back and forth at the start of the set. Freshman outside hitter Clara LaRue said staying positive in times like that helps her play her best, and she came in and shook the Seawolves with two strong kills to regain momentum and retake the lead at 9-8. With some great defensive work by senior libero Jordan Gower and 11 assists from Clark, the Phoenix narrowly closed out the set, 25-23.

LaRue put up the second most kills for the Phoenix with nine, just trailing Daniel’s team-high 11 for the day.

“At the start of the season, I was nervous getting to know the team. They made it really easy though to come in as a freshman and already be a family,” LaRue said. “I feel a lot more comfortable with everyone. Going into a match, I can trust the person next to me and work really well with them.”

Elon came back into the third set strong, making great saves as a team and throwing Stony Brook off its game. Strong blocking by sophomore outside hitter Sydney Love and senior middle blocker Claire Richey kept the Seawolves defense at bay and helped the Phoenix win the third set, 25-21.

“We are trying to keep the same intensity and focus so we can beat them even better tomorrow and bring that into the tournament,” LaRue said.

Tomorrow will be the last game in Schar for the season and for Elon’s five seniors — Clark, Daniel, Richey, Alex VanWestrienen and Jenn Krzeminski. The seniors will be recognized prior to the match, which is slated to start at 2 p.m.

“On Senior Day, we don’t want to go off with a loss, so I think everyone will be fighting, whether you’re a senior or not, to get that victory for them,” Tendler said.