Campus will run as normal this Veterans Day, but the holiday still prompts retired and active service members to reflect 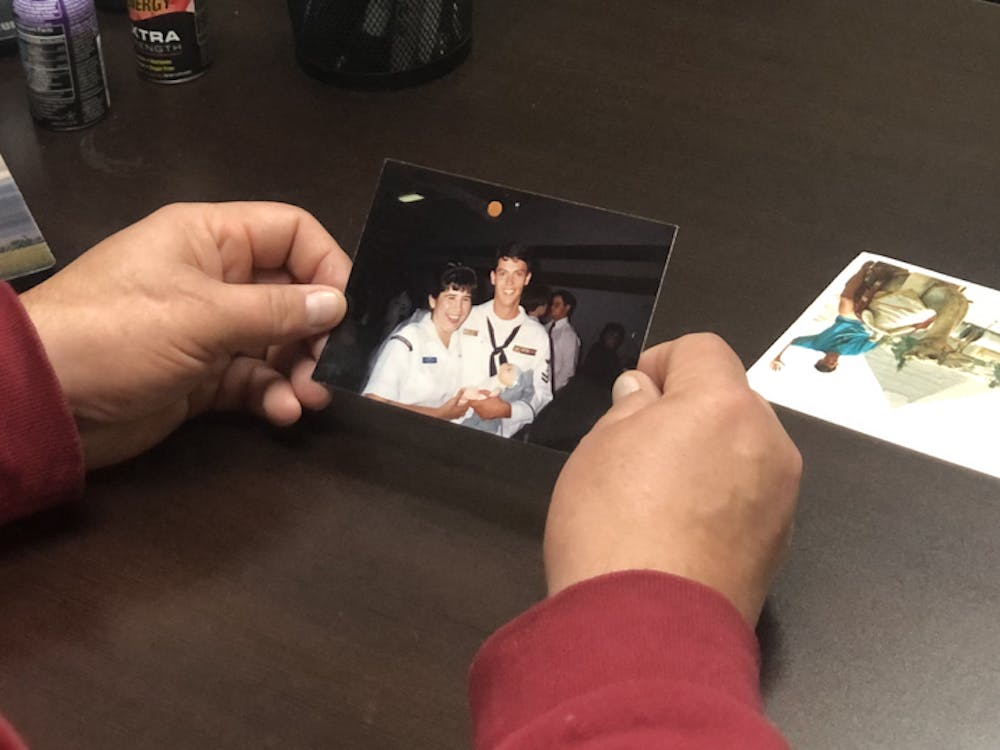 Photo by Margaret Faust | Elon News Network
Veteran and University Registrar Rodney Parks keeps pictures of his time in the U.S. Navy on his Elon University desk for safe keeping.

Each Veterans Day, University Registrar Rodney Parks reflects on his days as a medic in the U.S. Navy when he was stationed in Egypt. This year, Parks said he will be thinking about that time while working on Veterans Day on Nov. 11.

Elon University does not take Veterans Day off. Classes are still held, and university offices are still open. Elon is not alone — none of Elon’s 15 peer institutions take the day off either.

“Our work today is to serve the student body,” Parks said. “That’s our primary responsibility. Does the past matter for us? Yeah, it matters, but there’s a lot of ways that veterans celebrate: the call to honor, the remembrance and the little bit of reflection from the past.”

One undergraduate student and 11 graduate students at Elon currently receive veteran benefits, according to the Financial Aid Office. Neither the Registrar’s Office, Financial Aid Office, Bursar’s Office, President’s Office or Human Resources knew how many Elon employees are veterans. Regardless, everyone is expected to be in class or work on Friday.

Building Automation System Application Engineer Chris Turner said he isn’t bothered by working on Veterans Day either. He served in the Marine Corps for five years building and repairing radios. Even though he is new to Elon, having started his position in February, he isn’t surprised he is expected to work on Friday. In fact, he can’t remember ever having a job that took Veterans Day off.

“It’s no different than any other day,” Turner said.

Turner said if he was given the day off, he’d appreciate it.

“Any reason to get a little more time off, spend it with family,” Turner said. “It definitely would help to reflect on what the day might mean or even maybe to reach out to buddies.”

Mary Kay Hannah, assistant professor of physical therapy education, served as a police officer in the military and a physical therapist in Afghanistan. She said she has mixed feelings about working on Veterans Day.

“If you’re off for every single potential holiday, nobody’s ever in school. So I sort of get that,” Hannah said.

One of Hannah’s students, Britt Dixon, is a current service member in the National Guard. She has been deployed to Afghanistan, Kuwait, the U.S.-Mexico border and multiple states to help with hurricane relief.

“I don’t go out and celebrate my military status or anything like that,” Dixon said, “but it does make you pause and sometimes think about things that you don’t always actively spend time thinking about.”

“I don’t think it actively bothers me as long as I know that the university itself is going to respect the fact that a service member is, at times, going to have difficult obligations,” Dixon said.

Parks, Turner and Hannah are all planning to work that day, and Dixon will go to class. But they will each celebrate the holiday in their own way.

Parks has gone to Elon University’s annual Veterans Day Observance ceremony before and is looking forward to going again this year. He said it is a time for veterans on campus to reflect but also catch up and crack jokes.

“It’s always a kind reminder of the years that we put in and the fellowship and brotherhood that connected us all,” Parks said. “And it continues to connect us here.”

Although the event has been publicized, Hannah thinks it can get lost in the shuffle.

“Elon clearly doesn’t think it’s different,” Hannah said. “It’s just another one of the millions of opportunities that we all have to attend stuff here.”

To Hannah, Veterans Day is about honoring a specific type of service. She acknowledges people who serve in other ways, such as volunteering, but she said serving in the Army is different.

“[It’s the] ultimate measure of devotion that you wouldn’t come home, that defines the difference,” Hannah said.

She said she thinks that Elon cares about diversity, but one diverse group can be left behind — veterans.

Hannah said she doesn’t think Elon actively excludes veterans, but more could be done to make them feel welcome. One idea she has to achieve this goal is to establish a veteran’s office on campus. She thinks an office would build a sense of community and recruit more ROTC students.

“We’ll have coffee on Fridays at three. And tell war stories and help people who need help and make friends with people who might feel different because they’re older than regular students,” Hannah said.

Parks said President Connie Book absolutely recognizes and appreciates veterans. He usually hears from her via email on Veterans Day and said Elon is working on getting more veterans to work at and attend Elon, as well as get an ROTC office on campus.

Without an office, Parks shares his story with individual students. He thinks students who listen walk away with a better understanding of what it means to be a veteran.

“Some students that meet with me with coffee,” Parks said, “They get it. They understand.”

Parks explained that most of the students who ask to hear his story are usually the ones considering service themselves. And he wishes students who weren’t necessarily considering it would take an interest too.

“I think one of the most irritating and shallow things that anybody can say is, Thank you for your service,” Hannah said.

When people tell her that, she said she doesn’t know how to respond. She prefers when people say, “I honor your service” or ask a question to learn more about their service.

Hannah said Veterans Day is not just another holiday. It has important implications.

“I hope that students, staff and faculty take a moment to reflect on the fact that those who serve in the military have provided a valuable service and now have important experience that they’re respected for that,” Hannah said.