Elon University athlete bounces back to the court 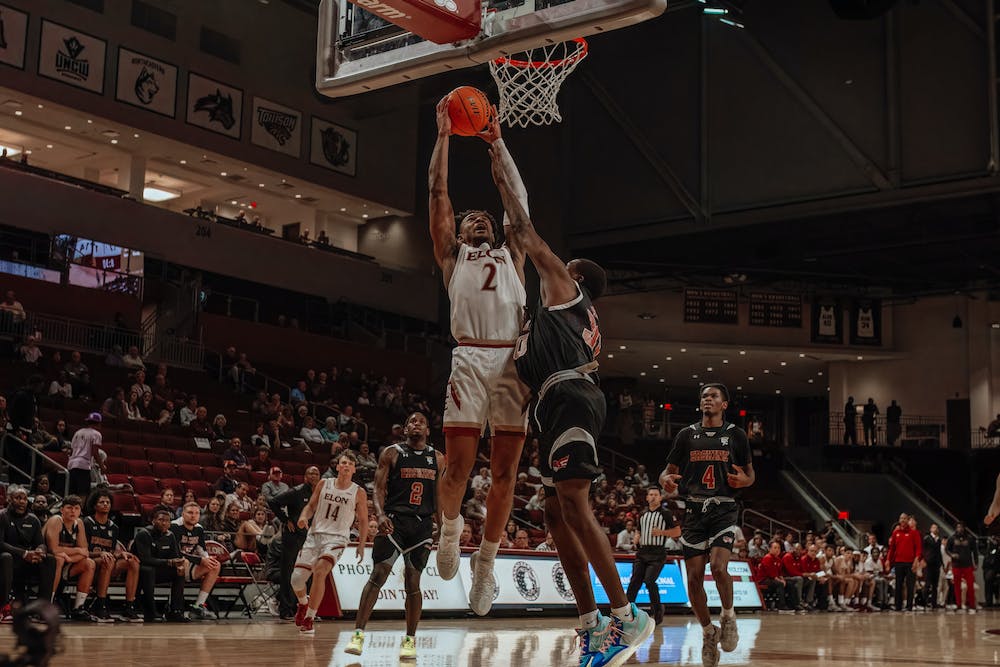 
Junior, JaDun Michael of the Elon University men's basketball team goes in for a shot against Erskine College defense on Nov. 7 at Schar Center. The team won 80-55.

Two long years of waiting came to an end this week for Elon University men’s basketball player JaDun Michael. After missing his first two seasons of eligibility because of injuries, the forward has finally worked his way back onto the court.

Now a junior, Michael was a highly-ranked recruit in high school, according to recruit ranking group 247Sports, and was originally committed to Wichita State. He decided to decommit after the COVID-19 pandemic interrupted his senior year of high school, wanting to be closer to his home in Burlington.

Michael said efforts to recruit him expanded after he decommitted, but he chose Elon so he could be close to his family.

“I chose Elon just because it was closer to home, and at the time, COVID was a big thing. I just felt comfortable being around my family,” Michael said.

Michael says he had big goals coming in, but those goals were quickly cut short in freshman year after he suffered a torn shoulder labrum. He was held out in his sophomore year because of the same shoulder injury.

“I'm just like every other person wanting to come in and want to win Rookie of the Year I want to come in and help for winning. But, things changed,” Michael said.

His shoulder injury and a subsequent knee injury shook up the game for Michael. But at the time, he didn’t know it would prevent him from playing for two seasons.

“It just made me just sit back and understand,” Michael said. “You just have to be patient.”

Michael said the two-year rehabilitation process hasn’t been easy, as basketball was an escape from everyday stressors. He’s had to find new ways to get through the mental challenges that come with injuries, but Michael said thanks to his team's support, he hasn’t felt alone.

“I really just found myself honestly understanding that I'm someone who takes a huge pride in mental health, self-care and stuff like that,” Michael said. “So I just started finding personal interests, like what makes me happy besides basketball.”

But  his injuries aren’t the only disruption Michael has faced at Elon. He’s also been working with a new head coach, Billy Taylor. This is Taylor’s first season coaching the men’s basketball team as it played its first game in Schar Center Monday.

But Taylor said he is excited to work with Michael and understands the adversity the athlete has faced.

“It's been frustrating for him to be injured through the first part of his career,” Taylor said. ”That's a tough thing to kind of balance and overcome. So he's had to work through a lot of adversity, and then you throw into that a coaching change.”

Only seven men’s basketball players return to the team this season, including Michael. So Taylor has set goals to bring the team together, regardless of experience levels. Taylor says team goals – and plans to reach them – are important to him this season.

“We understand that it doesn't happen on day one,” Taylor said. “There's a lot of work that goes into it. But understanding how we get there is important, so laying those foundational pieces so that we can continue to talk about it, reemphasize it and understand what it means, why it's important and how we'll ultimately get to the goals that we want to get to.”

The Phoenix won its Nov. 7 season home opener handily, besting Erskine College 80-55. As the season begins, Michael said he is looking to start off healed and healthy. He still has big goals and dreams of playing basketball at the professional level.

“I for sure want to be all-conference,” Michael said. “I think I'm very capable of doing so. A team goal. I want to win and I want to win it all. It's really that simple.”